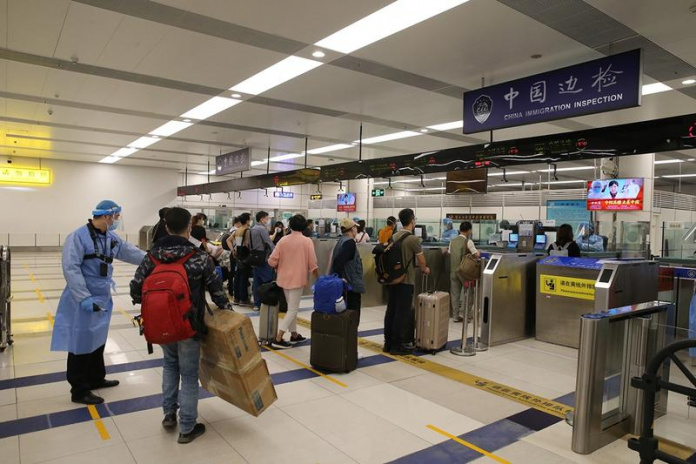 The online meeting between the top officials of the John Lee administration and the Guangdong and Shenzhen authorities on September 1, including the proposed “reverse quarantine” idea from the Hong Kong side, has important socio-economic and political implications for Hong Kong and its relations with the mainland.

Both sides discussed a variety of issues, ranging from Guangdong-Hong Kong to Guangzhou –Hong Kong cooperation, and from Shenzhen-Hong Kong cooperation to an idea of “reverse quarantine” proposed by the Hong Kong government. Guangdong and Shenzhen accepted this idea, with all sides setting up specialized groups to discuss the details. The groups will be led by Eric Chan, Chris Tang and Lo Chung-mau, while the Shenzhen side will be led by the Shenzhen city’s leadership.

On September 2, John Lee revealed that the idea of reverse quarantine is to hope that those people who isolate themselves in Hong Kong would meet the so-called 7 plus 3 requirement, meaning that when they enter the mainland, they will not have to quarantine themselves for 7 plus 3 days, especially as the hotel accommodation in the mainland is insufficient for a large number of people entering the mainland from Hong Kong. A black market of finding hotel accommodation has emerged for those Hong Kong people who want to visit their relatives in the mainland.

The Hong Kong government intends to set up pilot points at the Hetao or Lok Man Chau Loop area. However, the exact quota, the border checkpoints and the transportation details will need to be delineated through discussions. The working groups from both sides will also need to discuss issues like the requirements of border control, the standards of testing results, the so-called closed-circuit operation, and the procedures of recording and approving cases of applications. All these are technical details that will require intensive discussions.

John Lee said that Guangdong and Shenzhen have been helping Hong Kong tremendously in the outbreak of the fifth wave of Covid-19, sending medical staff members to the Hong Kong special administrative region, providing logistical supplies, and reaching consensus based on achieving mutual interests actively.

Both sides also prepare to discuss the fees required for reverse quarantine, but such charges will be “reasonable and fair.” In 2021, when the Hong Kong government used Penny Bay to quarantine Covid-infected patients, each patient had to pay for HK$480 for every night he or she stays in the quarantine unit, including three meals per day.

It was reported that the number of quotas for reverse quarantine will “not be much” at the beginning.

Apart from reverse quarantine, the Hong Kong and Guangdong/Shenzhen sides also deliberated on a multiplicity of cooperative issues, notably how to deepen collaboration between Guangdong and Hong Kong by setting up 13 specialized groups to deal with not only reverse quarantine, but also the Northern Metropolis development, the Nansha developmental plan, innovation and technology, monetary and financial development, trade and business, internship provided for the Hong Kong youth, legal arbitration, aviation and logistical supplies. Nansha is going to be a key area of cooperation in the Greater Bay Area.

Regarding the cooperation between Hong Kong and Shenzhen, nineteen groups will be set up to deal with innovation and technology, monetary and financial development, trade and commerce, youth employment, and Qianhai’s relations with Hong Kong.

Both sides came to a consensus that the Hong Kong government continues to support Qianhai to develop the function of experimentation first, followed by more concrete policies in the areas of infrastructure projects and software provision. The idea is to expand the service industry in Qianhai. It looks as if Hong Kong remains economically useful to Qianhai’s modernization.

Finally, in the areas of opening the monetary and financial market, the Hong Kong government and the Shenzhen Qianhai Management Authority will issue eighteen new directives to facilitate Hong Kong’s investment funds crossing the border to operate in Qianhai.

The idea of proposing reverse quarantine is significant in several aspects.

First, although the Covid cases in Hong Kong have been increasing, medical experts have remarked that the serious cases and death rate have been going down – an implication that the virus is getting weaker. However, the “dynamic zero-Covid policy” adopted in the mainland is an obstacle to cross-border human traffic. At a time when other parts of the world have already opened their air traffic, Hong Kong is lagging behind the world’s standard. In fact, many foreign businesspeople have already left Hong Kong quietly. As such, Hong Kong’s recent relaxation of air traffic from other parts of the world has been rescuing its status as an “international” city. A further opening-up process with the mainland will be necessary if Beijing is really keen to maintain Hong Kong’s international financial and monetary status.

Second, the mainland is very cautious in its dynamic zero-Covid policy, but Guangdong and Shenzhen are playing a precursor role in being bolder to open up to Hong Kong first – perhaps setting up a model for other cities in the mainland. Macau’s recent tight measure of barring citizens from going out the streets for two weeks did hurt the economy, although the tough measure appeared to work well as cross-border human interactions between Macau and Zhuhai have just returned. Still, the mainland’s bitter experiences in early 2020, especially in Wuhan, have been haunting some provinces and cities. News reports indicated that the mainland leadership had a debate over whether pragmatism should prevail over the ideology of dynamic zero-Covid policy. If Guangdong and Shenzhen are going to open a bit, thanks to Hong Kong’s gradual liberalization, then pragmatism must prevail over ideology in the mainland, especially if some businesses in the mainland have been badly affected by the stringent anti-Covid policy.

Third, the reverse quarantine idea is an innovative breakthrough that can demonstrate the success of “one country, two systems.” This policy is surely bolder than the mainland. Yet, it remains to be seen whether the central health and political authorities in the mainland will allow Guangdong and Shenzhen to move boldly first as an experiment before other cities will follow suit at a time when Covid-19 appears to fade away gradually in the world.

Fourth, the various groups to be set up by the Hong Kong, Guangdong and Shenzhen sides are important for a planned accelerated process of socio-economic integration in the Greater Bay Area. This model of setting up various working groups is a good one for Macau’s integration into Hengqin. Macau may also learn from Hong Kong’s reverse quarantine policy, especially if many Macau people have been suffering from job loss and income decline after the outbreak and persistence of Covid-19 in 2020.

Objectively speaking, the reverse quarantine idea proposed by the Hong Kong government is a demonstration of the viability of the “one country, two systems” with a certain degree of innovative breakthrough. The challenge is how the Guangdong/Shenzhen and Hong Kong sides will reach consensus on many technical details which will have to be solved at a time when the world and the region are entering perhaps and hopefully the last stage of Covid-19. The tight measures adopted by Hong Kong in dealing with air traffic from outside affected its international status tremendously, because many local people and foreigners have already migrated out of the special administrative region. If the mainland Chinese health authorities realize the tremendous economic costs of a very tight anti-Covid policy, they will have to be more pragmatic and much bolder in dealing with its border opening with Hong Kong, Macau and the outside world. Hong Kong can still be used as a gateway to open the mainland’s door to the outside travelers and visitors at a time when Covid-19 is showing signs of weakening than ever before.