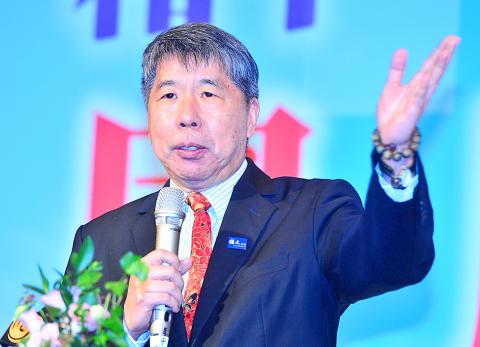 The defeat of Chang Ya-chung, a dark blue candidate running for the Kuomintang (KMT) leadership election on September 25, had profound implications for cross-strait relations, especially on how the Taiwan experts of the People’s Republic of China (PRC) can explore and come up with a Taiwan model of “one country, two systems” in the coming years.

The results showed three main features in the KMT’s internal power struggle. First, the local party elites tended to support Chu and some members preferred to vote for Chu while abandoning Johnny Chiang, who worked hard at the grassroots level but whose weak political platform failed to attract more votes for him to retain the party chairmanship position. Second, Chang Ya-chung’s dark blue position advocating a memorandum of understanding and peace agreement between the mainland side and Taiwan proved to be a very provocative one to some voters. His emphasis on the need for the KMT to rebuild its spirit and style struck a responsive chord with many voters. Chang’s rapid rise and impressive performance demonstrated that the dark blue camp still has a political market in Taiwan; nevertheless, such a market remains relatively small in the whole population of Taiwan. The voter turnout was only 50.71 percent – a result that was not very satisfactory given the high-profile and polarized debates in the campaign. Third, Eric Chu did not really perform well in the election, putting forward a relatively weak platform and remaining in a defensive position. Chu’s victory was attributable partly to the conservative elites who were dominant in the party machinery and partly to the fear of some KMT members that the party would be deeply divided if Chang Ya-chung would win the election.

The responses from some mainland experts on Taiwan are interesting. On October 1, Professor Li Peng, the Dean of the Taiwan Study Center at Xiamen University, said that the KMT should develop its functions and promote peaceful development across the two straits, and that it can work constructively for the common interests of the comrades from both sides (see http://www.CRNTT.com, October 1, 2021). Yan Anlin, the Deputy Dean of the Shanghai Institute for International Studies, and his colleague Ji Yixin, wrote on October 2 that they hoped the KMT would inject a new element of “positive energy” to revive the KMT in the forthcoming elections (also see http://www.CRNTT.com, October 2, 2021).

Most importantly, on the morning of September 26, the General Secretary of the Communist Party of China (CPC), Xi Jinping, responded to the victory of Eric Chu by congratulating his victory, and by adding that the CCP and KMT, on the political basis of opposing “Taiwan independence,” would strengthen cooperation, develop the peaceful development of both sides of the two straits, and seek to achieve national reunification and national renaissance (United Daily News, September 26, 2021).

The resumption of the CPC General Secretary’s congratulatory message to Eric Chu on September 26, 2021, was a significant move pointing to the PRC side’s expectation that both parties across the two straits should and would strengthen cooperation in the short run.

On January 2, 2019, CPC General Secretary Xi Jinping appealed to the Taiwan comrades that both sides of the two straits should “explore” a Taiwan model of “one country, two systems.”

However, because of the negative response from the ruling authorities of the Taiwan side, this Taiwan model of “one country, two systems” has not achieved any significant breakthrough until Chang Ya-chung refloated his idea of both sides reaching a memorandum of understanding and even peace agreement during his fiery election campaign for the KMT leadership. Chang was criticized by some KMT members for being “red,” an accusation that he denied. His idea could be a potential breakthrough in cross-strait relations if Chang were elected as a KMT chairman. Nevertheless, in terms of practical operation, there would be some difficulties. When asked by KMT member Jaw Shau Shaw-kong what would happen if Chang’s idea of a memorandum of understanding and peace agreement between the two sides would be rejected by KMT members, Chang replied that he would resign from the party leadership position – a response that Jaw said would be unsatisfactory.

Procedurally speaking, any KMT chair who floats an idea of reaching a memorandum of understanding between the two straits would face two hurdles: first whether the idea would be sabotaged by the ruling Democratic Progressive Party (DPP) that would mobilize public opinion to oppose it, and second whether it would be rejected by the KMT elites and members themselves.

Perhaps a more fruitful approach is to consider how a Taiwan model of “one country, two systems” can be designed so that most members of the KMT and also most Taiwan people would find it more acceptable and attractive.

Although the responses from a few mainland experts on Taiwan are very positive toward the KMT, which they hoped would play a constructive role in cross-strait relations, the crux of the problem is that many Taiwan people do not find the Taiwan model of “one country, two systems” clear or attractive.

While it remains to be seen how the mainland’s Taiwan experts are coming up with a clear “Taiwan model” of “one country, two systems,” the ideas of a mainland professor and that of a Taiwan counterpart deserve our attention.

In December 2020, Ni Yongjie, a Deputy Director of the Shanghai Institute of Taiwan Studies, said that China’s reunification of the Taiwan district would have three routes: the best and most ideal strategy is to adopt “wise reunification;” the middle-range strategy is to adopt “peaceful reunification” that would be much longer in terms of the timeline; and the worst strategy would be the adoption of “forceful reunification” (BBC Chinese News, January 18, 2021). Ni elaborated on the three components of “wise reunification,” namely (1) the formulation of a new constitution along the Taiwan model of “one country, two systems;” (2) the adoption of military, diplomatic and legal means to curb and eliminate the hostile forces on Taiwan, and (3) the persistent struggle between China and the anti-China forces so that reunification between the mainland and Taiwan would be reached one day. Ni’s ideas were thought-provocative and illustrated the mixture of peaceful and forceful means that might be adopted.

A more interesting idea of the Taiwan model of “one country, two systems” has recently been floated by Wang Kun-yi, a professor and Director General of the Taiwan International Strategic Study (see www.voacantones.com, September 5, 2021). Wang proposed a third alternative apart from the options of “forceful reunification” and “peaceful reunification,” namely “cooperative reunification.” Wang borrowed the term “cooperative” from the former Canadian Foreign Minister Joe Clark’s concept of “cooperative security” in September 1990 at the United Nations, and he applied it to cross-strait relations in a seminar held in Guangxi in late July.

Wang disagreed with Ni’s idea, saying that the latter adopted an approach that would make Taiwan “passively reunified.” Wang criticized Ni’s idea of formulating firstly a constitution, which to Wang would bring about endless debates within Taiwan. Wang elaborated his idea of “cooperative reunification” in three aspects: (1) both sides of the two straits should be cooperative in unconventional security matters, such as disaster relief and humanitarian aid; (2) collaboration in infrastructure projects like railway linking the mainland with Taiwan; and (3) cooperation in the development of the semi-conductor industry in the Greater China region.

Strictly speaking, Wang’s idea of developing infrastructure projects linking the PRC with the Taiwan side would be feasible, but it would need some degree of consensus among the Taiwan people, especially the politicians. The idea of cooperation in semi-conductor industry would be technologically controversial, for technology transfer from either side appears to be politically sensitive. Most importantly, technology transfer from Taiwan to the mainland may trigger the response from the US side, thereby complicating Wang’s solution of improving cross-strait relations.

A more realistic and feasible solution is to combine the elements of Ye Jianying’s nine-points in September 1981 with President Xi Jinping’s five-points formula in January 2019, making them more attractive to the Taiwan side. The most important elements in Ye’s nine points are to preserve Taiwan’s socio-economic system and existing military and to embrace Taiwan comrades’ investment in the mainland. The two most important points in President Xi’s speech in January 2019 are to speed up integration between the two sides, especially through the closer interactions between Kinmen and Mazu on the one hand and Fujian on the other hand, and to explore the Taiwan model of “one country, two systems.”

Specifically, once Covid-19 tapers off later, Kinmen and Mazu would likely be a target of closer cooperation, say, by exploring a bridge or an underground tunnel linking Kinmen and Mazu with the Fujian province. If both sides, as Wang said, put infrastructure development as a priority, a potential breakthrough in bilateral relations could be made.

Thirdly, since the process of reunification may be a long and difficult one, both sides can agree to a stage-by-stage process in which cooperative socio-economic interactions (human, economic and infrastructure cooperation) between the two sides would be the first stage, followed by a memorandum of understanding to be reached with peaceful development as the key objective, and then by a process of trust-building to explore the long-term prospect of reunification.

Fourth, both sides must enhance more intensive human interactions and scholarly exchanges to build up mutual trust. Because of the outbreak and persistence of Covid-19, trust-building between the two sides has been hampered. As such, a relaxation in travels, visits and tourism will be a must once Covid-19 fades away. Otherwise, without intensive human interactions and exchange of ideas, trust-building is very difficult to be achieved, as Chang Ya-chung’s idea of enhancing relations between the two sides was easily but perhaps unfairly labelled by his critics as being “red.”

In conclusion, Chang Ya-chung’s defeat in the KMT leadership election means that the political market for a closer cross-strait relations remains relatively weak in Taiwan. As such, the mainland side and its Taiwan experts must work harder to explore the concrete content of the “Taiwan model” of “one country, two systems.” Ye Jianying’s nine points and President Xi’s five points can be built up further to constitute the Taiwan model of “one country, two systems.” While Ni Yongjie’s idea of “wise reunification” is a good one, the path of reunification between the two sides remains far away and difficult. Wang Kun-yi’s idea of enhancing “cooperative security” between the two sides is a constructive one, with the possibility of using Kinmen and Mazu as the first point of enhancing more contacts and infrastructure development in the short run. In the medium and long term, there will be a need for both sides to exchange all their preconditions one by one to enhance human interactions, to build up trust, and to reach a memorandum of understanding at a politically ripe time. Some of the innovative ideas of Chang Ya-chung, Ni Yongjie and Wang Kun-yi can be selectively and constructively combined with some modifications to improve cross-strait relations, which will likely be the most important event shaping the Greater China region in the coming decade.