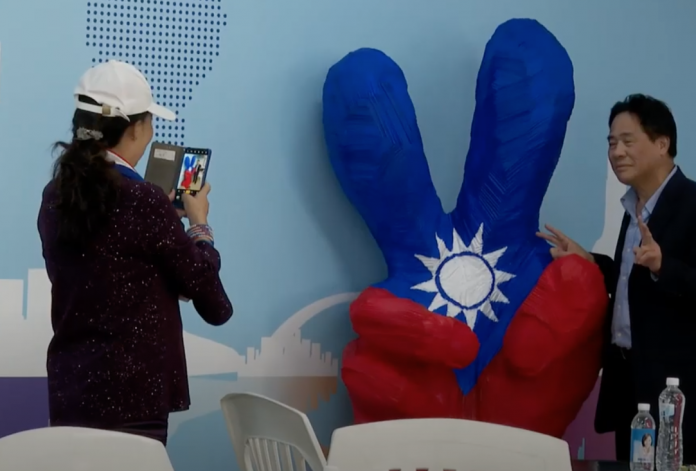 Recent development in the Kuomintang, Taiwan’s opposition party, has shown that while its chair Eric Chu has been adopting a moderate policy toward mainland China, its party candidates are actively preparing for the upcoming mayoral elections in Taiwan.

Chu’s comment also evoked the responses from the mainland. Ma Xiaoguang, a spokesperson of the mainland State Department’s Taiwan Affairs Office said that the 1992 consensus could not be distorted at a time when the situation between the two straits was complex. Ma added that he hopes the people in Taiwan should keep their cool heads in the main political issues concerning nationalism.

Some KMT members regarded Chu’s visit as a victory not only emphasizing its pro-US position but also adopting a peaceful approach to dealing with mainland China.

A former KMT chair Johnny Chiang remarked that he did not want to comment on Eric Chu, but he stressed that the voice on the need to improve KMT relations with the US had already been articulated at a time when he was the chair March 2020 to October 2021. Hence, Chu’s visit to the US was an affirmation of this KMT policy line. Chiang also added that the KMT office in Washington was a good beginning, allowing Taiwan’s voice to be heard by the US policymakers on Taiwan rather than having a situation in which Washington just listened to the Democratic Progressive Party (DPP).

Born in 1978 and a great grandson of Chiang Kai-shek, Wayne Chiang Wan-an has become a rising political star in the KMT. He graduated from National ChengChi University and the University of Pennsylvania, practiced law in California before he moved back to work in Taiwan in 2013. In May 2022, the KMT nominated him as a candidate in the forthcoming mayoral elections in Taipei city on November 26.

In June, Chiang publicly said that he feels proud of being a member of the Chiang family, and that this is his political asset in electoral participation. At the same time, Wayne Chiang commented publicly that the Taipei-Shanghai Forum should be held under the circumstances that the mainland would not send its military planes to “disturb Taiwan,” that it could release friendly gestures, and that both sides should have “equal status.” The way in which Chiang delineated his political position showed that his remarks were made in consideration of the electoral market in Taiwan, where most voters have a very strong local Taiwan identity and where most of them prefer a mainland policy harmonious toward the island.

The KMT’s internal division was easily seen in mid-June 2022 when Chang Ya-chung, who was a dark blue member of the KMT and who was defeated by Eric Chu in the 2021 party chairperson election, openly criticized Chu for spending a lot of money in the 2021 KMT chairperson election. Chang added that although he did not have sufficient resources, he got one-third of the total votes. The KMT supporters of Eric Chu immediately responded to Chang’s criticism, saying that Chang made a claim without sufficient evidence. Chang also said that although some KMT members favored him as a candidate in the Kaohsiung mayoral election, party chair Eric Chu could still ignore him.

Chang’s remarks implied that the KMT was internally dominated by the Eric Chu faction, which might not allow him to run for the mayoral election in the city of Kaohsiung.

Naturally, Chang Ya-chong expressed his disappointment with the KMT decision. His efforts at running and the KMT’s final decision showed that party factionalism remains serious within the party. Chang had tremendous potential to mirror the popularity of the former KMT mayor Han Guo-yu.

In Chang’s attempt at running for the mayoral election in Kaohsiung, there were rumors that the KMT conducted an opinion poll showing that Ko Chih-En’s popularity was ranked number one while Chang was ranked number five. Nevertheless, it was unclear whether and how such a poll was conducted. Supporters of Chang questioned whether the so-called “poll” was a “fake” one.In September, many voters in Kaohsiung were reportedly unfamiliar with Ko. If Ko were later defeated in the mayoral election in Kaohsiung, it would sound a dangerous signal to the mechanism of the KMT in nominating candidates to run for the mayoral elections.

Even though Chang Ya-chung was not an internally favored candidate by the KMT party center, he remains a critic of the party. In July, when the KMT party headquarters showed its flag at half-mast to mourn the sudden death of the former Japanese Prime Minster Shinzo Abe, Chang criticized the KMT move as “shameful” and losing its party “dignity.” He said that the party could send someone to mourn Abe’s death in Japan’s trade office in Taipei, but it was unnecessary to lower the party flag. Chang criticized Abe for being hardline on the Diaoyu (Fishing) Island when he was the Japanese Prime Minister. Chang remains a core member of the dark blue camp within the KMT.

Other members of the dark blue camp within the KMT included Andrew Hsia, who went to the mainland after the Pelosi visit to Taipei. Some KMT candidates were concerned about Hsia’s visit on their electoral chances. Ko Chih-En said publicly in August that Hsia’s visit to the mainland was “inappropriate” now because most Taiwan people want to maintain the status quo in cross-strait relations.

Eric Chu in mid-August responded to the Andrew Hsia’s visit in a supportive manner. He said that it was easy for Hsia not to visit the mainland, because his visit was bound to be criticized for hurting the KMT and the election. However, Chu added that his visit was “good” for the people of Taiwan because it could at least reduce the economic harm to Taiwan. Specifically, businesspeople and farmers in Taiwan had been suffering tremendous economic losses – a phenomenon that the Taiwan people did not want to witness.

The important KMT candidates in the upcoming mayoral election include Wayne Chiang in Taipei city and Hou You-yi in New Taipei North. In July, Wayne Chiang said publicly that the exchange and dialogue between Taiwan and the mainland are significant – an indication that he is moderate in the blue camp. He is now competing with DPP candidate Chen Shih-chung. Chen has recently vowed to revamp Taipei’s public toilets if he were elected as a new mayor – a remark triggering the criticisms from current mayor Ko Wen-jie, who said that such amenities were scrapped due to high costs. Another independent candidate Huang Shan-shan is also running in the Taipei mayoral election. Recent opinion polls have showed that Chen Shih-chung’s popularity appeared to be slightly higher than Wayne Chiang, who however got many young people’s support as with Huang Shan-shan.

In August, Hou You-yi’s campaign managers were reportedly young and belong to the 20s. He is facing DPP candidate Lin Chia-lung, in the New Taipei North city’s mayoral election. Hou was regarded as a potential contender in the Taiwan presidential election in early 2024. His electoral performance in retaining his mayoral seat in New Taipei North will deserve our attention. Hou’s success will surely point to his rosy future in KMT’s internal politics.

In early September, when Eric Chu cut short of an interview by a German media when he was asked about the KMT’s “low” popularity, the DPP camp and media seized the opportunity to criticize his behavior. Obviously, the DPP camp has been regarding the reviving KMT as a serious political threat.

In conclusion, while the KMT has been showing signs of internal factionalism, its candidates running for the 2022 mayoral elections are apparently strong and may either retain their incumbent seats or score new victories. The tensions between the dark blue camp and the moderately blue faction persists within the KMT. The moderately blue camp led by party chair Eric Chu is eager to steer a middle-of-the-road approach to dealing with the US and mainland China, to win the hearts and minds of voters, and to revive the KMT in its transition to the politically significant 2024 presidential election. It remains to be seen whether the KMT’s revival and rejuvenation will be successful on November 26, when the mayoral elections will be held.