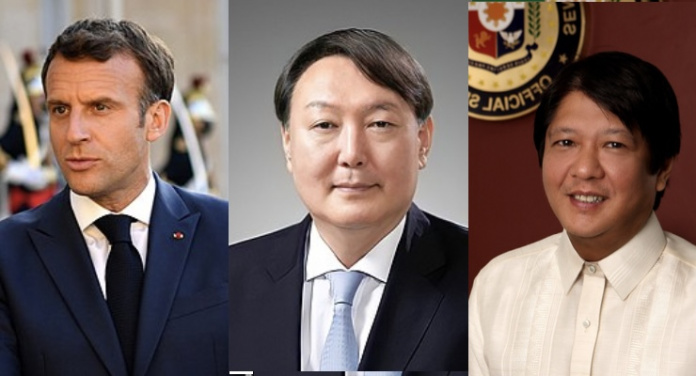 The re-election of Emmanuel Macron as the French President in late April, the swearing-in ceremony of the new South Korean president Yoon Suk-yeol on May 10, and the election of Ferdinand Marcos Jr. as the new president of the Philippines marked the leadership changes in three countries with implications for their relations with the People’s Republic of China (PRC).

Macron’s victory over the nationalistic and Eurosceptic Le Pen was seen as a stabilizing factor shaping the continuity of France’s foreign policy toward the US, European Union and China. France has traditionally been adopting an independent foreign policy, including its relatively neutral stance toward the Russian-Ukrainian conflicts. The independent foreign policy adopted by France has much in common with that implemented by the PRC. It is widely expected that Macron’s government is going to enhance economic cooperation and partnership with China.

On the afternoon of May 10, the PRC President Xi Jinping had a phone meeting with Macron, exchanging their views toward the Russian-Ukrainian conflicts. President Xi emphasized that China adopts its own style in promoting Russia and Ukraine to have dialogue, that the confrontation between blocs should be avoided, and that such confrontation would constitute a persistent threat to global peace.

President Xi added that, because China and France are the independent, autonomous and big countries in the Security Council of the United Nations, both should maintain the mentality of “independence, autonomy, mutual understanding, having long-term vision and mission, and retaining the mutual win-win situation.” Both China and France should respect their core interests, enhance coordination and cooperation bilaterally and globally.

President Xi emphasized that China and France should promote bilateral dialogue in the coming five years in the areas of nuclear energy, aviation, aerospace and artificial intelligence, and the exploration of new and clean energy. Xi added that China is willing to expand the import of quality products from France and that it welcomes high-tech investment and financial enterprises to do business in the PRC. He hoped that the French side will provide a fair, just and non-discriminatory business environment for Chinese enterprises. Obviously, President Xi stressed the win-win situation in the bilateral cooperation between China and France.

Xi also elaborated on China’s appreciation of France’s strategic autonomy, adding that France should promote the EU to accurately understand China’s position, especially as France holds the rotating presidency of the EU so that a healthy and sound relationship between the PRC and the EU would be fostered.

In response to President Xi’s remarks, Macron said that France and China have lots of consensus on the Ukrainian issue, that France is willing to enhance cooperation with the PRC in bilateral dimensions, and that France supports the idea of maintaining an independent and autonomous strategy and agrees with China that it would not participate in any confrontation between political blocs.

Given that President Xi appealed to both sides to make use of major events, such as the 60thanniversary of Sino-French diplomatic relations and the Paris Olympics that would take place in 2021, to enhance people-to-people and cultural exchanges, both countries are expected to enhance cooperation under the presidential leadership Macron. Stability and continuity are the hallmarks of Sino-French relations after Macron’s re-election.

On May 10, when Yoon Suk-yeol sworn in as the new South Korean president, PRC Vice President Wang Qishan was President Xi Jinping’s special representative to attend Yoon’s inauguration ceremony. Wang conveyed President Xi’s best wishes to Yoon and added that China and South Korea are good neighbors and important cooperative partners. Due to the rapid changes in the world and the persistent Covid-19, both the PRC and South Korea should enhance cooperation and promote their strategic cooperative partnership to a higher level.

Wang made give suggestions to enhance Sino-South Korean relations. First, both sides strengthen strategic communications and high-level exchanges and dialogue. Second, both sides should deepen pragmatic cooperation in key areas and their cooperation in third party’s markets, thereby elevating the standard of cooperation. Third, China and South Korea should enhance cultural and human interactions, injecting positive energy in the people-to-people relationships. Fourth, both sides should communicate more and enhance their coordination in regional and international affairs, while protecting multilateralism and the free trade system so that regional and global prosperity can be maintained. Fifth, both sides should consolidate cooperation in the north-south affairs in the Korean Peninsula, promote cooperation and resolution of any dispute, and develop the denuclearization of the Peninsula and foster persistent peace.

Yoon expressed his gratitude to President Xi’s best wishes and added that both countries established diplomatic relations for thirty years. As such, South Korea and China have already promoted rapid development in their bilateral relations. He agrees that both sides should enhance high-level communication and exchanges, while promoting the stability, peace and prosperity of the Korean Peninsula.

However, an obstacle hindering the closer relationship between China and South Korea is the increasingly pro-US stance adopted by Yoon. During Yoon’s presidential election campaign, he vowed to deploy more THAAD missiles from the United States to bolster South Korea’s defense capability if he were elected. It remains to be seen whether he would do so. Doing so, however, would incur the opposition and strong reaction from China and North Korea. On May 4, North Korea’s state media criticized Yoon as not only “pro-US” but also “confrontational.”

Yoon has shown his staunchly pro-US position on May 10, when he met Douglas Emhoff, the husband of US Vice President Kamala Harris and the American delegation. Yoon referred to the South Korean-US alliance as the “core axis” of “Northeast Asian peace and prosperity.” President Yoon also toys with the idea of South Korea’s active participation in the US-led Indo-Pacific Economic Framework. Moreover, he revealed that South Korea is interested in participating in the US-led Quadrilateral Security Dialogue (QUAD) which is made up of the US, Australia, India and Japan. This QUAD partnership is seen as a bloc attempting to counter China’s influence. As such, any South Korean move to join QUAD would likely worsen the relations between Seoul and Beijing.

In fact, President Yoon has another option in his foreign policy. Rather than deploying THAAD that would incur the wrath of North Korea and China, and instead of joining QUAD, he and his foreign policy makers can make use of the closer relations with China as a glue to enhance South Korea’s relations with North Korea. If South Korea can enhance its autonomy vis-à-vis the United States while utilizing the PRC as a middleman to cement relations with North Korea, the prospects of denuclearization in the Korean Peninsula would perhaps have a potential breakthrough.

At present, President Yoon only appeals to North Korea to embark on denuclearization so that South Korea would help strengthen Pyongyang’s economy and improve the quality of life of North Koreans – an appeal that is of no use if North Korea sees nuclearization as an effective means of protecting its national security.

In the Philippines, the new President Marcos would likely maintain a balancing act between China and the United States. In 2016, a problematic arbitral tribunal formed under the International Law of the Sea ruled in favor of the Philippines over China’s territorial claim over the waterway in the South China Sea. During his election campaign, Marcos said that the ruling was ineffective because China did not recognize it. Instead, Marcos would likely seek to reach a bilateral agreement with China to resolve the territorial dispute – an approach that, if adopted, would be more diplomatic than the anti-China orientation of the late president Benigno Aquino III. President Rodrigo Duterte put aside the ruling and adopted a more friendly diplomacy toward China while increasing his administration’s autonomy from the US.

It is likely that President Marcos would maintain the continuity of Duterte’s foreign policy, but he is going to strike a delicate balance between a more friendly relation with China on the one hand and a close military relation with the US on the other hand. In March 2022, the US and the Philippines held a large and joint military exercise involving 8,900 troops (including 5,000 US military personnel) – an exercise showing that the Duterte government shifted to adopt a more pro-US stance than the beginning of his presidential administration. Given the vested interest of the military in the Philippines to forge a closer relation with the US military, President Marcos would likely continue with the military alliance with the US.

However, President Marcos would likely rely on China’s investment to propel the economy of the Philippines, like his late father Ferdinand Edralin Marcos who engaged with China after establishing diplomatic relations with the PRC in 1975. Given a sizable and economically influential ethnic Chinese community in the Philippines, President Marcos would be wise to forge closer economic relations with the PRC, whose Belt and Road initiatives will surely benefit the Filipino economy.

In conclusion, leadership changes in France, South Korea and the Philippines show continuities and changes in their foreign relations with China. While the French foreign policy is marked by independence and autonomy, the re-election of Macron marks the continuity of France’s relations with China. However, given a more pro-US outlook of President Yoon in South Korea, it remains to be observed whether the South Korean administration would not only adopt an increasingly pro-US policy but also form a political and strategic bloc that would worsen South Korea’s relations with North Korea and China. The Philippines under new President Marcos would likely combine the tradition of his late father with the practice of his predecessor Duterte, adopting a more friendly relationship with China while maintaining its military alliance with the US. If international relations are marked by continuities and changes, leadership transformations in France, South Korea and the Philippines display a similar pattern in their foreign relations with China.

May 26, 2022
UK Defence Secretary Ben Wallace on Wednesday called on Moscow to do the "right thing"...

May 26, 2022
Britain brings out the bunting next week for Queen Elizabeth II's Platinum Jubilee, with four...
Load more