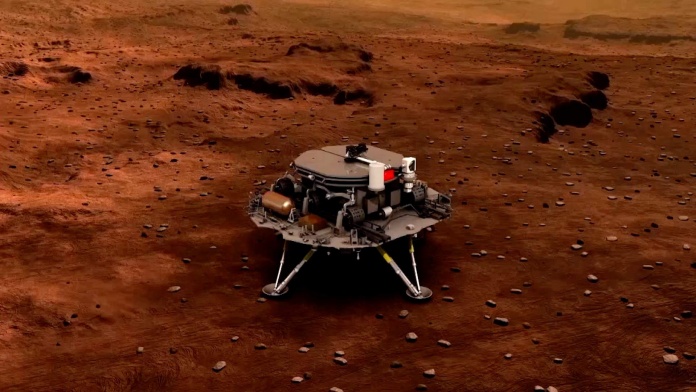 It might have passed a bit under the radar but this week Chinese and space exploration history was made.

On Friday, China successfully landed a spacecraft on Mars, becoming only the second country, after the US, to successfully send missions to the Red Planet.

A six-wheeled robot named Zhurong, after the Chinese god of fire, safely surpassed the famous ‘seven minutes of terror’ entering Mars’ atmosphere and landing in the Utopia Planitia, a vast terrain in the northern hemisphere, using a combination of a protective capsule, a parachute and a rocket platform.

The mission was part of China’s Tianwen-1 mission, which launched in July 2020, and apart from being a major milestone for China’s space agency it will also lead to important discoveries concerning water and past habitability on the planet, paving the way for future human missions to Mars.

The mission comes just three months after the US successfully landed the Perseverance rover, a mission that in contrast to the Chinese mission was greatly publicised and broadcast live, even though it was launched and landed at about the same time as the Chinese mission.

However, despite the obvious ‘space race’ competition going on, the Head of Science at NASA, the US space agency, issued a congratulatory message saying he greatly looked forward to the important contributions this mission will make to humanity’s understanding of the Red Planet.

It’s an encouraging statement in the sense that each space mission is another light that shines on a dark corner of science, illuminating the path not just for one country but for humanity as a whole.

In the enlightening path the Chinese space agency has walked so far, Macau has also surprisingly played a part.

The State Key Laboratory of Lunar and Planetary Science (SKLplanets) at Macau University of Science and Technology was only established in 2018 as the country’s first state key laboratory in the field of astronomy and planetary science but it has already played an important role in China’s lunar and Mars missions.

Scientists from the Macau University of Science and Technology have conducted research on astrobiology, surface radiation environment, atmosphere and dust climate, internal structure, and the magnetic fields and space environment of Mars, essential studies to ensure the safe landing of China’s Martian rover.

Last year, researchers from SKLplanets were also involved in the scientific team research conducted with data collected by the Chinese lunar Chang’e-4 mission, a robotic spacecraft mission – part of the second phase of the Chinese Lunar Exploration Program – that completed humanity’s first soft landing on the far side of the Moon.

In November, 2020 the Chinese Lunar Exploration Program launched Chang’e-5, a sample return mission that brought back Moon samples to Earth for the first time in 40 years, making China only the third country, after the U.S. and the former Soviet Union, to accomplish such a feat.

For its precious contribution, the local state key lab will have the honour of receiving some samples for research this year.

SKLplanets is also already preparing more collaborative work with the country’s space agency plans to end the decade by launching a spacecraft to the largest planet in our system, Jupiter, that could include a lander bound for one of its moons, Callisto, in order to unravel mysteries behind the planet’s origins and, in the process, those of our solar system and our own planet.

The help provided by SKLplanets shows how Macau SAR’s assistance to China’s development goals can go further than just talk and actually produce concrete results that would be of invaluable help not just for the country but for humanity in general.

In his book ‘Death’s End’, Chinese science fiction writer Liu Cixin stated that the “ultimate fate of all intelligent beings has always been to become as grand as their thoughts”.

The Earth is already too small for us to limit our efforts and dedication to imaginary borders.

Egypt dusts off pyramids for fashion, pop and art shows

December 5, 2022
From Queen Elizabeth II to the Soviet Union's last leader Mikhail Gorbachev, here are some...

December 5, 2022
From the Russian invasion of Ukraine to the overturning of abortion laws in the United...

December 5, 2022
From roasting temperatures to rocketing energy prices and millions of refugees fleeing Ukraine, 2022 was...