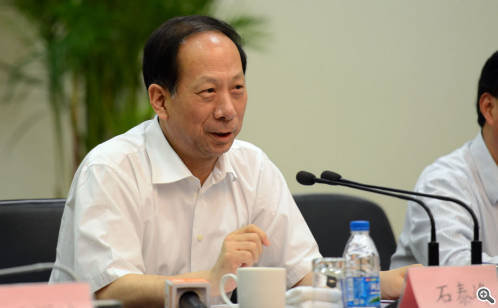 The appointment of Shi Taifeng, a member of the 24-member Politburo of the Communist Party of China (CPC), to be the minister of the United Front Department has important implications for China’s united front work on Hong Kong, Macau and Taiwan in the coming years, especially on Taiwan whose political future will be ranked as one of the top issues in the CPC’s agenda after the 20th Party Congress.

The 66-year-old Shi has taken over from the 68-year-old You Quan who is reportedly going to retire from the political scene as You’s name was excluded from the membership of the Central Committee of the CPC.

By convention, the minister of the United Front Department must deal with the affairs affecting Hong Kong, Macau and Taiwan. Given the fact that Hong Kong, Macau and Taiwan occupy a central part at the beginning and at the end of the report delivered by the CPC General Secretary Xi Jinping to the 20th Party Congress on October 16, it is evident that the newly appointed Shi will play a crucial role in formulating and implementing China’s united front work on the three places.

Shi’s rapid rise to the top ministerial position is a surprise to some outside observers; nevertheless, a close look at his credentials shows that he is very well qualified.

Shi was born in the province of Shanxi in 1956. During the Cultural revolution, Shi was one of the youths being sent down to work in the countryside to experience the life of peasants. Later he studied machinery and worked in a factory as a worker. In 1978, Shi enrolled at Peking University to study legal theory and was a classmate of the current Premier Li Keqiang. In 1982, Shi graduated from Peking University’s law faculty with a master’s degree and his master thesis was about the legal theory of Engel.

Shi not only had rich experiences at the Central Party School and Jiangsu province, but he also became the party secretary of the Ningxia Hui Autonomous Region in April 2017 – a position that would eventually help his current work covering Hong Kong, Macau and Taiwan. In October 2017, Shi was elected as a member of the Central Committee during the 19th Party Congress. Another significant position taken by Shi was in October 2019, when he was appointed and rotated as the party secretary of the Inner Mongolia Autonomous Region. In January 2020, he shouldered the responsibility of conducting anti-corruption work in the region, dealing with unethical behavior in the handling of coal and other resources allocation work. Many corrupt officials were investigated the penalized. Most importantly, Shi implemented the widespread usage of Han Chinese characters in the Inner Mongolian primary and secondary schools. In April 2022, he was rotated to be the Dean of the Chinese Academy of Social Sciences. Two moths later, he became the deputy director of the NPCs Education, Science, Technology, Culture and Health Committee. In October 2022, Shi was elected as a member of the CPC Politburo.

Shi’s anti-corruption crusade in Inner Mongolia deserved our attention. The anti-corruption work he implemented was not only in full conformity with CPC General Secretary Xi Jinping’s emphasis on clean government, but also profound in the sense that some 1,000 officials in Inner Mongolia covering their corrupt behavior for 20 years were investigated. As Xi Jinping emphasized in the 20th Party Congress that the CPC must engage in “self-revolution” and continuous renewal through anti-corruption campaigns, Shi’s work was clearly highly regarded by Xi.

According to the Xinhua report about Inner Mongolia on January 21, 2022, Shi Taifeng gave a powerful speech in a city in Inner Mongolia by emphasizing high-quality development, raising the banner of “Xi Jinping new era Chinese-style socialism thought,” and remarking the need to “fully implement Xi Jinping’s directives” on economic work and the improvement of business environment. Shi listened to the views of eight city officials, interacting with them on how to activate the economy, promote sustainable development, and develop high-ended industrial sectors. Shi emphasized the need for efficiency and effectiveness in economic management, including the necessity of meeting deadlines in construction work and the usage of digitized platform to improve governance and the delivery of urban services.

Hence, a closer look at Shi’s work showed that he was and is not only a loyalist of the Xi Jinping thought, but also an experienced official dealing with legal theory, education work, organizational affairs, the developmental matters of autonomous regions, the full implementation of anti-corruption work, the adoption of economic pragmatism, and the realization of the need to promote e-governance. If united front work requires a new leader who is ideologically clean, richly experienced, economically pragmatic, and politically loyal, then Shi’s credentials are clearly very strong, unlike what some observers have queried.

Indeed, the challenges of Shi’s work on Hong Kong, Macau and Taiwan persist. First and foremost, Beijing’s united front work on the Taiwan people have been disrupted severely since the onset of Covid-19 in earl 2020. With the fading away of Covid-19 and its variants, we can expect the enhancement of united front work on Taiwan to proceed in all aspects, educationally, economically and socially, in the year 2023 and beyond. In the past, the mainland’s united front work appeared to focus on the dark blue and blue camps and failed to achieve any breakthrough in contacting, let alone uniting, more people in the green camp. Arguably, reaching out to some moderate people in the green camp, and explaining to them the twin elements of peaceful reunification and a stage-by-stage negotiation in the Taiwan model of “one country, two systems” will be two preconditions to mainland China’s success of united front work on Taiwan in the coming years.

Second, although the introduction of the national security law has greatly stabilized Hong Kong’s society since late June 2020, many Hong Kong people have been so politically upset, frightened and disappointed that they have been exhibiting various tendencies, ranging from exit from Hong Kong through family emigration to a return to political apathy, and from political cynicism toward “patriotic” elites to indifferent attitude toward politics. As such, united front work in Hong Kong cannot only narrowly restrict to the “patriotic” elites and masses; it has to be expanded to those people whose political mind has been “hurt” by the relatively conservative and hardline policies adopted by the authorities dealing with Hong Kong matters.

Third, although Macau is often a mainlandized city with tremendous influence of the “patriotic” elites and masses, some Macau people were quite unhappy with the relatively hardline disqualification of some politically very moderate and rational democrats in the territory’s legislative elections in 2021. Perhaps Shi’s new leadership may study the possibility of fostering a more relaxed political environment in Macau whose image of political tolerance, as with the Hong Kong case, is of utmost importance if united front work can and will really succeed. All the moderate people in Macau and Hong Kong realize the paramount importance of national security, but they all hope for a more relaxed political and social atmosphere in the coming years.

In conclusion, Shi Taifeng’s appointment as the new minister of China’s united front department is due to his rich educational, organizational, anti-corruption, and capability-building experiences. However, it remains to be seen how his United Front Work Department can and will improve its work on Hong Kong, Macau and Taiwan, especially Taiwan where many people are resistant to the usage of “one country, two systems” to deal with the island’s political future. Although “patriots” ruling Hong Kong is a phenomenon firmly entrenched by the new electoral system under the national security law, many Hong Kong people have become apathetic, cynical and silent. It remains to be seen how the central authorities can and will really win the hearts and minds of these Hong Kong people. Finally, and ideally, the central authorities may revisit their relatively hardline approach to disqualifying many very moderate people in Macau’s last legislative elections. If united front work on Hong Kong, Macau and Taiwan has much room to improve, Shi Taifeng’s future challenges will likely be more dauting than conventional wisdom may have assumed.