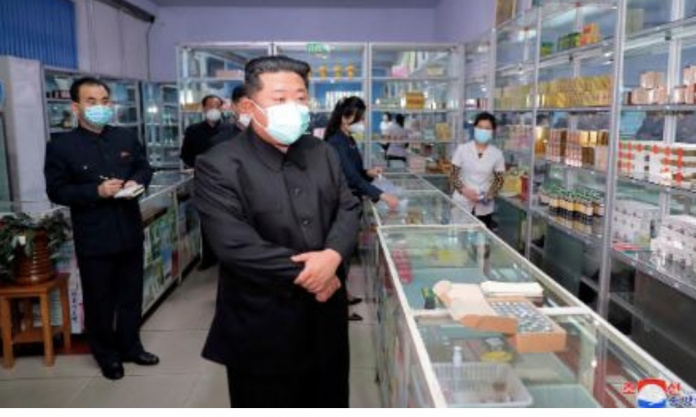 Since the North Korean state media reported cases of Omicron on May 12 that six people died and 350,000 people had been treated after the end of April for an obscure disease, there weresigns that Omicron was spreading in North Korea where the authorities are not only taking swift measures to battle the infectious disease but also working with China to strengthen medical supplies and logistics.

On May 12, 18,000 citizens reportedly had fever. Among the six people who died, one was attacked by Omicron. Among the 350,000 people who had fever in April, 187,800 were quarantined and received treatment.

The North Korean supreme leader Kim Jong-un presided over the Politburo meeting of the Workers’ Party on May 10, saying that the nation encountered a crisis and urging that officials must curb the spread of the disease. Kim added that the system of resisting Covid-19 had shown “gaps.” He emphasized that the government must implement the policy of quarantining the entire nation to resist the spread of Omicron, while at the same time protecting the convenience of citizens. As such, all enterprises, production units and community must take quarantine measures to segregate those citizens infected with Covid-19 and its variants. The Politburo meeting on May 10 elevated the battle against Omicron to the highest level, showing that the North Korean leadership saw the spread of Omicron as a national security matter.

Kim Jong-un described the “vicious cycle of the spread of infectious disease” as the “greatest disaster” since the founding of the Democratic People’s Republic of Korea (DPRK). However, he thought that if North Korea could maintain “strong organizational ability and controllability,” the country would be able to overcome Covid-19. He mentioned the need for North Korea to learn from the experiences of China.

On May 18, the Korean Central News Agency reported that Kim Jong-un admitted the “immaturity” of his country in dealing with Covid-19, and that he accused some government officials of showing deficiency and lax attitude in resisting the infectious disease. On May 17, Kim presided over the Politburo meeting and said that “time is survival” in a “complex and difficult” period of coping with Covid-19 and its variants like Omicron.

North Korea has been lacking vaccines to resist the spread of Covid-19 and its variants. Moreover, the country’s public health facilities were inadequate. Public health officials in North Korea had already formulated a detailed guideline for dealing with Covid-19, while preventing the excessive use of medicine for treatment. The guideline included details on how public health officials dealt with different types of patients who were infected with Covid-19 and its variants, and on what kinds of medication should be used in various categories of patients.

On May 15 three North Korean airplanes arrived at Shenyang city in China’s Liaoning province. They carried logistical and medical supplies and flied back to North Korea in the afternoon of May 15. The airplanes did not carry any Chinese personnel. ATaiwan report on May 17 said that North Korea had already requested China for assistance in the provision of logistical supplies to combat Omicron in North Korea.

On May 16, the Chinese Foreign Ministry’s spokesperson Zhao Lijian said in a press conference that anti-Covid work is a common mission of the world, that China and North Korea had an “excellent tradition of mutual guidance and assistance,” and that China is willing to support North Korea in the process of fighting Covid-19 and Omicron.

Zhao’s remarks coincided with the report that North Korean airplanes belonging to Air Koryo flied to Shenyang to acquire medical and logistical supplies. As such, the cooperation between China and North Korea to combat the spread of Omicron in North Korea began.

On May 17, the United Daily News in Taiwan reported that the number of deaths in North Korea rose to 56 cases since the end of April, and that the South Korean estimated the number of deaths might be five or six times higher than the official North Korean figure. Furthermore, the North Korean hospitals had insufficient infrastructure, facilities and medical supplies, making the patients infected with Covid-19 and its variants extremely vulnerable.

However, some reports said that North Korea had started buying medical supplies, such as masks, anti-fever medicine and testing kits, from China as early as late April. In mid-May, when the military was sent to pharmacies in Pyongyang to deal with the distribution of medical and logistical supplies, high-ranking military officials such as Choe Ryong-hae (chairman of the Standing Committee of the Supreme People’s Assembly and First Vice President of the State Affairs Commission) and Premier Kim Tok-hun (also a full member of the Politburo of the Workers’ Party) inspected how the supplies were handled.

The North Korean authorities taught citizens on how to tackle their fever stemming from Omicron, such as using salty water to wash their mouth regularly and deploying herbal tea to suppress fever. Citizens also used antibiotics to deal with Omicron.

On May 20, a Taiwan news report said that the total number of North Korean cases infected with Omicron was reaching 2 million, and that the South Korean intelligence apparatusspeculated that Kim Jong-un has not yet received vaccination against Covid-19.

However, according to the latest report on Kim Jong-un, he said in the most recent Politburo meeting that the situation of Omicron in North Korea was improving. Moreover, the emergency measures adopted by North Korean authorities in combatting the spread of Omicron has already obtained “progressive results.” Given the pattern that Omicron’s spread took almost one and a half month to reach its apex, the North Korean circumstances might have reached its peak of Omicron attack if Omicron had begun in April.

In conclusion, North Korea’s battle against Omicron has achieved positive results, partly because of its resilience and prompt action and partly due to its policy learning. With the assistance from China in providing medical supplies to North Korea, the Omicron spread in North Korea has perhaps reached its peak. The question of how to fight the war successfully against Omicron and its spread has obviously become a national security issue in North Korea. Yet, by mobilizing its citizens, government officials and the military, North Korea is riding out the storm gradually.