Nobody can ignore that the recovery of the local economy hinges strongly on the performance of casinos. People and financial flows need to be re-established to reach income levels comparable to those prevailing before the big crash. That hinges on policy decisions, whether determined by sanitary reasons, or by other types of considerations. Authorities have not been very forthcoming on those issues.

In general terms, there is an observable preference for a slow, or even very slow, pace of adjustment. But not much is available if one looks for more precise targets or timeframes, however modest or far away they are set. It is still unclear what the Government has in mind about the speed and timing of the recovery. That adds an element of uncertainty to both businesses and the population.

Last week, the Government announced several events, mainly street carnivals of one sort or the other, to attract visitors from the mainland. There is nothing wrong with that. Nevertheless, given the extreme sanitary precautions that seem to underpin policy decisions, this seems a slightly odd approach.

More importantly, for the argument here, it is not apparent that it is the most appropriate path to regain meaningful levels of visitors and income for a city whose prosperity relies heavily on visitors’ expenditures.  Further, the mainland’s sole promotion focus consolidates a perception that opening to other visitors’ sources will not be on the table anytime soon. Even the neighboring SAR, our second source of visitors, seems out of bounds.

The number of visitors targeted is one of the few quantified objectives. It will reach, on average, and at best, 24,000 thousand per day, for the time being. It is a modest target, unlikely to soothe the wounds of the last hard months. Even if that figure was reached every single day, it means levels of visitors almost standing back at square one in the casino era.

Economic structures built to cope with much more than that – they were dealing with almost five times as many visitors before the pandemic – will hardly survive in their present form. A protracted upturn will achieve little in terms of income and employment and will accentuate social asymmetries. The perceived intention to reduce the overall public budget, without touching the remunerations’ packages, will add cuts in current Government expenditures, compounding the contraction effects of a declining private income.

Hundreds of houses destroyed by twin tremors in Greece

March 8, 2021
Roger Fedrer said retirement was never really an option during his battle with injury, insisting...

March 8, 2021
US President Joe Biden will sign an executive order to make it easier for Americans... 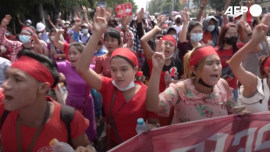