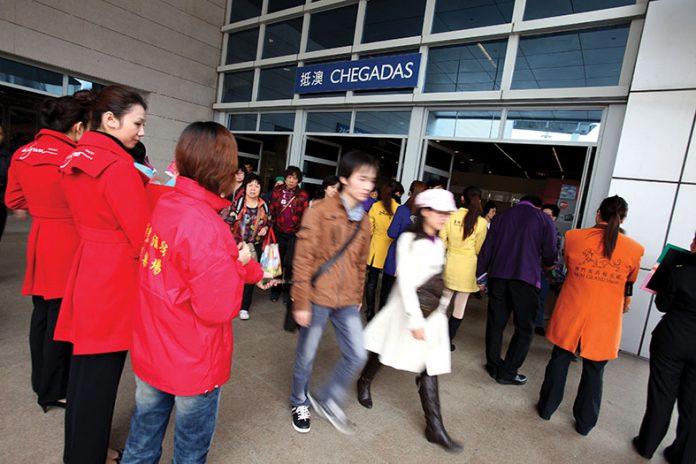 Another week goes by and Macau sees another step forward and two steps back in the long and winding road towards establishing a regional travel bubble.

On Friday the Novel Coronavirus Response and Coordination Centre announced local residents departing from India, Pakistan, Bangladesh, Philippines, Indonesia and Brazil and wanting to return through the special ferry service set between Macau and the Hong Kong International Airport will have to present a negative Covid-19 nucleic acid test issued by a qualified medical institution in the country of origin.

The new policy seems prompted by 46th confirmed Covid-19 case reported last week, the first in 78 consecutive days, which involves a local resident Filipino national who was returning from his home country.

However, the choice of countries does seem a bit odd, considering that it does not include some of the other countries that top the list of confirmed cases worldwide such as the US with almost 2.4 million cases, Russia with 619,936 and the UK with 310,836.

Tourism authorities themselves indicated that of the 660 people that have returned to Macau through the ferry link since it started on June 17, about 100 came from the US, while only 50 local residents have come from one of the six countries included in the list.

Would it be too politically sensitive to demand the same test requirements to people coming from the US, in a time of rising tensions between Chinese authorities and the Trump administration?

According to the Centre Coordinator, Leong Iek Hou, the list of countries was established taking into account the number of tests conducted by countries with the most number of cases and evaluating the country of origin of the most recent imported cases in Hong Kong, which did not include people coming from the US or Europe.

This plays to the recurring theme in past government statements that show distrust towards the level of testing in other Asian countries, especially Southeast Asian countries, with local authorities not trusting the official figures reported.

However, if I remember correctly most reported imported cases in the previous period a special channel was established to return to the city involved local students returning from the UK.

In any case, the provided list is temporary and can be changed at any time, which I’m sure does not reduce the anxiety of local residents looking to return through such a short window ending on July 16.

Meanwhile, Chief Executive Ho Iat Seng pushed back any good news of a regionally limited travel bubble to be established with Guangdong and Hong Kong to July, as this month’s Beijing outbreak seems to have ruined plans for a quicker re-opening.

Even the recent increase in daily quarantine exemption quotas to Zhuhai from 1,000 to 3,000 sounds almost flat, as residents and legislators alike pled for the system to be expanded to at least nearby Guangdong cities such as Zhongshan or Jiangmen.

Until then and as the proper and obedient citizens we are, we wait in our small rock by the river bed and make plans for summer staycations and local tours.

The offers of empty rooms are plentiful and for now, money flows freely from government coffers.

Let’s just wish recent predictions of a complete tourism market recovery only in 2023 were on the pessimistic side.

Otherwise, that 10 per cent budget cut proposed by CE Ho Iat Seng for 2021 might just be the first of many.