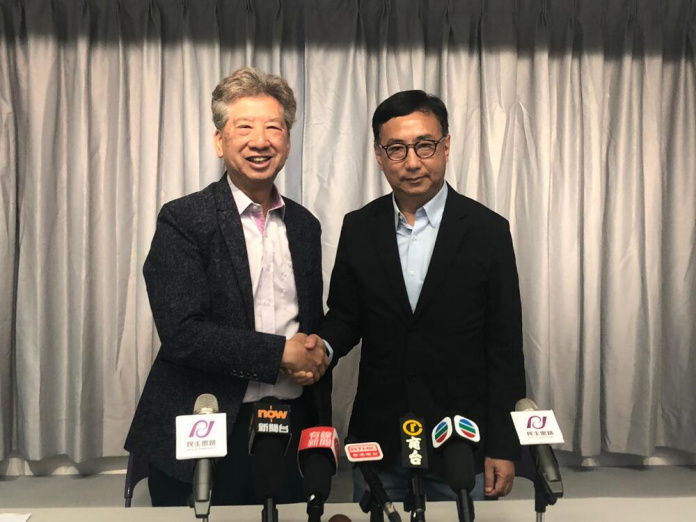 A public announcement made by the Path of Democracy led by Ronny Tong and the Third Side led by Tik Chi-yuen on October 22 to form an alliance to nominate candidates running in the December Legislative Council (LegCo) elections was politically significant, because it signaled the first move by some moderate democrats to play the role of a loyal opposition in the politics of the Hong Kong Special Administrative Region (HKSAR).

According to a four-point platform released by the Path of Democracy and the Third Side, both groups vow to protect the “one country, two systems” in the HKSAR beyond 2047 and to seek to maintain the existing lifestyle and features of Hong Kong under Chinese sovereignty. Moreover, both groups affirm the Chinese sovereignty over Hong Kong and the need to protect national security in the HKSAR. The two political groups also promote democratic politics and seek to create the conditions for universal suffrage through cooperation and dialogue with different political parties and groups, the central government in Beijing and the HKSAR government. Democratic system is to be promoted in the city under the “one country, two systems.” Finally, the two groups seek to elevate the standard of governance and implement the principal officials’ accountability system in which principal officials should have their platform and indicators of their policy portfolios to be regularly held accountable to ordinary citizens (Ming Pao, October 23, 2021).

In the realm of electoral politics, Ronny Tong said that the Path of Democracy intends to nominate four to five candidates to participate in LegCo elections – a decision that would be made by its Board of Directors soon. Furthermore, through coordination with the Third Side, the Path of Democracy would not have its members competing in the same constituencies in LegCo elections. At the same time, the Third Side would have three members participating in the elections. Apart from Tik Chi-yuen who would likely run in the social welfare sector, Chui Ting-bong would participate in the Kowloon East constituency and Wong Chun-long in the Kowloon West constituency.

When asked whether the two groups would target at the pro-democracy voters, Tong remarked that they would seek the support from all the citizens of Hong Kong rather than individuals and groups. He predicted that the voting turnout in December would likely be low because the traditional democrats would not participate in the elections. As such, the supporters of traditional democratic camp would, according to Tong, feel that the elections would “not be meaningful.” However, he added that the voters who did not vote in the past may consider voting because of the electoral participation of the Path of Democracy and the Third Way.

Tik Chi-yuen added that both Tong and he withdrew from party politics several years ago, and that they have kept communicating with each other. Their “root” is based on the democratic camp with the political ideal of pursuing democracy and the objective of scrutinizing the government “relatively severely.” Both, according to Tik, insist on the path of pursuing the third way, trying to get back voters’ confidence in not only the LegCo’s balance but also the supervision over the government. In this way, Tik hopes that citizens would be willing to cast their ballots. When asked on how the two groups coordinate in the elections through the 1,500-member Election Committee, Tik remarked that the “technical function” of the two groups remains weak and that the forthcoming election would be “the most difficult one.” Yet, Tik believes that the electoral situation for the non-establishment camp should not be “too pessimistic.”

When asked whether the two groups may cooperate with the Association for Democracy and People’s Livelihood and with Frederick Fung, Tik said that they would cooperate with those people who accept the four points in the political platform shared by the Path of Democracy and the Third Way. They would not exclude the possibility of collaborating with moderate democrats who share their political platform and ideals. Frederick Fung told the media that he would “never say never” on the question whether he would participate in LegCo elections.

Ronny Tong summed up the main political belief of the two groups in the following way: “We also believe that by preserving and respecting the constitutional order [of Hong Kong], it is possible to strike a right balance between the constitutional order and the core values and freedoms of the people (Radio Television Hong Kong, October 22, 2021).” He added: “I think it would not be too meaningful for anyone to try to say whether we are closer to the pro-government parties or we are closer to the pan-democrats. We are simply different.”

The joint efforts by the Path of Democracy and the Third Way to come up with the four-point platform and to run in the December LegCo elections are politically significant in several aspects.

First and foremost, for the first time in Hong Kong’s historical development after the promulgation of the national security law in late June 2020, the moderate democrats came out to publicize their platform and expressed their positive determination to participate in the December 2020 LegCo elections. Regardless of their participatory results, they have become the third force representing the moderate democratic camp, a force that should be recognized positively from the pro-establishment camp, if not necessarily the central authorities.

Second, the participation of some moderate democrats may have a positive impact on the reinvigoration of moderate voters to cast their ballots in the December LegCo elections. As Tong mentioned, the two groups might attract those moderate democratically inclined voters who did not vote in the past, or who were unhappy with the radical democrats in the past few years.

Fourth, no matter how many moderate democrats would be elected to the LegCo, they would be a tiny minority which would have to make strategic coalition and alliance with other factions or cliques within the legislature, which has become far more harmonious than the situation before December 2020.

Fifth, the four-point political platform released by the Path of Democracy and the Third Way is politically significant, for it does strike a balance between the long-term quest for universal suffrage and the need to protect the national security of the central government in the HKSAR.

Sixth, the platform seeks to enhance the accountability of principal officials, who would be expected to come up with their platform, or performance pledge as witnessed in the last years of the British colonial administration. In recent years, most principal officials appointed by the Chief Executive and approved by the central authorities have perhaps neglected the importance of going down to listen to the views of ordinary citizens at the grassroots level. The recent moves by the Liaison Office’s officials to go down to the streets to meet ordinary citizens did exert some pressure on the principal officials to follow suit. So far, however, many principal officials have not reached out to the grassroots level extensively. If mainland Chinese politics are characterized by the concept and practice of mass line, meaning that officials should go to listen to the views of the masses first and then provide policy feedback to them, then the principal officials in the HKSAR should ideally adhere to this important principle of “democratic centralism.”

Seventh, the emphasis on dialogue with other political groups, the central authorities and the HKSAR government is a hallmark that distinguishes the alliance between the Path of Democracy and the Third Way from the previously mainstream and radical democrats, who often refused and rejected constructive dialogue with the central authorities and the HKSAR government. Dialogue and communications can and will enhance trust-building in the difficult path of development in Hong Kong politics.

In short, the alliance between the Path of Democracy and the Third Way can be regarded as an ingredient of positivism in Hong Kong’s political landscape, which has been marked by pessimism shortly after the promulgation of the national security law. For the moderate democrats in Hong Kong, the promulgation of the national security law was necessary and inevitable and their positive attitude toward electoral participation does inject an element of hope in the pervasively pessimistic atmosphere of the HKSAR. Although the “patriotic” mass media have seemingly played down the alliance’s formation and its political platform, a new third way in the development of Hong Kong politics has perhaps begun. Whether this third way would persist and grow will depend much on not only the responses from many ordinary citizens, whose political culture has been negatively affected by the city’s political development, but also other pro-establishment elites and stakeholders, who should ideally reach out to embrace the moderate democrats in the political landscape of the HKSAR.