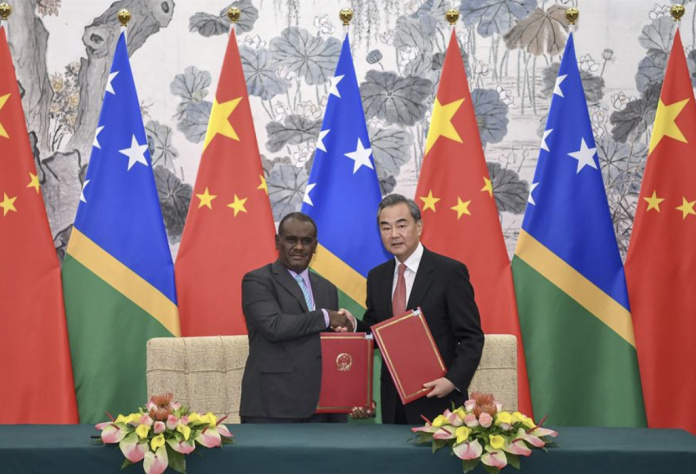 The immediate and deep concerns expressed by Western countries, including United States, Australia and New Zealand, to a recently signed security pact between the People’s Republic of China (PRC) and the Solomon Islands fully reveal not only their geo-political reactions but also their neglect of the dynamics of why Solomon Islands reached the new security pact with China after the riot in late 2021.

According to a leaked framework agreement, Solomon Islands can request China to send police, armed police and military personnel and other law enforcement forces to the Islands to help maintain social order, protect the people’s lives and property, provide humanitarian assistance, and conduct disaster response in accordance with the needs and consent of the Islands. Moreover, China may make ship visits to the Islands, may obtain logistical replenishment and may stop over the Islands, while Chinese forces may also be used to protect the safety of Chinese personnel and main projects there.

Undoubtedly, Western countries like Australia, New Zealand and the United States have been reacting strongly, seeing such a security agreement as a threat to their national security and political interests.

However, from an objective standpoint, during the riot in Honiara that began from November 24 to early December 2021, hundreds of Chinese citizens became homeless and four people were killed in the city’s Chinatown. The Chinese embassy on the Solomon Islands had to help the Chinese residents in Honiara, where a peaceful protest launched by a reportedly pro-Taiwan group named Malaita for Democracy demonstrated against the government of the Solomon Islands for not only changing its diplomatic ties from Taiwan to the PRC in 2019, but also accusing the local government of alleged corruption and unemployment.

The protest turned violent, leading to looting and the fire set on buildings. The local police were used tear gas and rubber bullets to quell the domestic unrests, which cost the Solomon Islands U$67 million losses. The complexity of the local unrest in Malaita was that the province was the most populous and governed by Premier Daniel Suidani, who tended to support the United States and Taiwan. Domestic politics were intertwined with the triangular politics between Beijing-Washington-Taipei.

Although Taiwan denied any involvement in the domestic unrest in Malaita, it provided development aid such as masks and rice to the province as part of the island republic’s Covid-19 diplomatic maneuver over the Solomon Islands. The pro-China government of Prime Minister Manasseh Sogavare survived a no-confidence vote in the Solomon parliament on December 6, 2021 by having 32 votes supporting him against 15 that called for his downfall. Some critics of the Sogavare government accused some parliamentarians supportive of Sogavare of accepting China’s development fund, but such an accusation lacked concrete evidence and led to the government’s denial and rebuttal. The domestic politics of the Solomon Islands were enmeshed in the political rivalries between the pro-US/pro-Taiwan local faction and the pro-China faction.

Western observers who see China’s new security pact as a “threat” to Australia, New Zealand and the United States have ignored how the Chinese residents in the Chinatown of Honiara became the political victims of the unrest. Nor do they identify the importance of how to build up the police force on the Solomon Islands, where the Royal Solomon Islands Police remained weak and had to rely on the Australian police force to maintain law and order if necessary. If the security agreement between China and the Solomon Islands aims at building up the policing capacity of the Islands, it is understandable and natural that many Australian observers and politicians have been viewing the Sino-Solomon Islands security pact as a so-called “threat” to Australia, which has traditionally seen the Solomon Islands as its “backyard” or its sphere of geopolitical influence.

Yet, if the Solomon Islands is a sovereign state with its determination to decolonize its policing reliance on Australia and shift such dependence to a more autonomous manner with the Chinese policing assistance, the move away from the policing dependence on a “white” country to another Asian giant naturally triggered the Western overreaction to such a security pact. If the rise of China has been seen by many countries in the world as a “threat,” it is easy to understand the Western overactions to the Sino-Solomon Islands security pact. TheWestern colonial domination over Solomon Islands has been so deeply entrenched and taken for granted that the Chinese security pact with the Islands came as a shockwave.

Moreover, although the Chinese population only occupied 0.1 percent (about 700) of the total 720,000 population of the Solomon Islands, they are diligent and competent traders and businesspeople who have been contributing immensely to the hotel, restaurant, catering, gaming and shipping industries on the Islands. Their social status in Solomon Islands is high and they have good connections with the local peoples. As such, any riot that affected their personal safety and interests must arouse the concerns of the PRC government, which has its obligation to protect its citizens. If the overseas Chinese are the natural target of China’s united front work, the residents living in the Chinatown of Honiara were and are politically significant to the PRC foreign policy toward the Solomon Islands.

Of course, in recent months, the Chinese military build-up and installations on the Mischief Reef, Subi Reef and Fiery Cross on the South China Sea have raised the eyebrows of the United States and its allies as well as the Philippines. Territorial disputes over the Spratly Islands have become a precipitating factor contributing to the strong Western reaction to the security pact between China and the Solomon Islands.

From an analytical perspective, the Solomon Islands remains a weak state in the Pacific Ocean. When it has attempted to regain more autonomy away from Australia, the security pact with China is a decolonization initiative to enhance the policing capability of the Islands. However, if Australia was the traditional protectorate of the weak Solomon Islands, China’s entry into the security arena of the Solomon Islands is naturally viewed by some Australians as a failure of Australia’s foreign policy, which failed to win the hearts and minds of the political leadership on the Islands.

A careful reading of the leaked security agreement on the Internet has revealed that confidentiality and the validity of five years were two of the main stipulations. The phenomenon of having the draft agreement leaking out to the Internet showed that the Solomon Islands had internal opinion difference over the pact. Most importantly, the agreement is valid for five years. Its content constantly emphasizes mutual consultation, equality and consent from both sides. As such, most Western critics of the pact have ignored the principle of mutual equality and consent in the leaked agreement.

In conclusion, the recent Western responses to the Sino-Solomon Islands security pact are not only an outcome of the traditional Western colonialism and hegemony over the Solomon Islands, but also a result of the perception of the “China threat.” The “China threat” perception is partly the outcome of the rapid rise of China, politically and militarily, and partly a strong and continuous reaction to the Chinese military activities in the South China Sea. Yet, objectively speaking, Western critics of the Sino-Solomon Islands security pact have ignored the sovereign right of the Solomon Islands to shift its weak policing capacity away from a previous dependence on Australia to arobust local police force with the policing training and assistance from China. These critics have also ignored the fact that China has its obligations to protect the personal safety and interests of its citizens and overseas Chinese on the Solomon Islands.

June 25, 2022
More than 2,000 sub-Saharan migrants tried on Friday to breach the border between Morocco and...