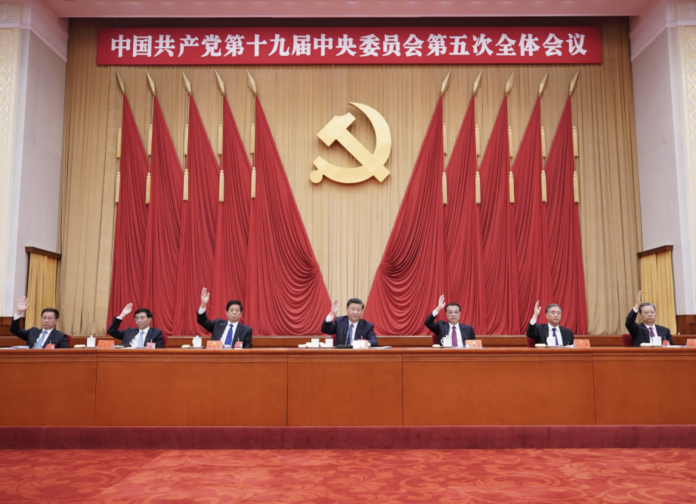 It is often a perplexing task for political observers to predict leadership succession in China because of the nature of inside politics; nevertheless, the forthcoming 20th Party Congress would likely witness a younger generation of Chinese leaders who would go up to be the seven members of the Politburo Standing Committee (PSC) of the Communist Party of China (CPC).

The often-quoted political practice, namely “seven up and eight down” (those who reach 67 may continue, and those who reach 68 may step down), was by no means a principle strictly observed in the 19th Party Congress during which 67-year-old Li Yuanchao, who was a Politburo member and became China’s Vice President in March 2013, stepped down from the Central Committee. Another good example was Wang Qishan, who joined PSC as a member in November 2012 at the age of sixty-four, but who stepped down from the PSC and secretary of the Central Discipline Inspection Committee in October 2017. Wang was highly respected and was then elected in March 2018 to succeed Li Yuanchao as the Vice President.

Most importantly, Xinhua news agency reported at the end of the 19th Party Congress in October 2017 that “those who conform to the age requirement are not necessarily nominated continuously – a situation mainly depending on the candidates’ political performance, clean governance and the needs of the career positions on whether they should stay or step down.” If political practice can change over time, this is no exception in China’s leadership succession.

The Xinhua assertion in 2017 has not been noted by some outside observers, who have made many and often conflicting predictions on the leadership succession in the forthcoming Party Congress.

The new political practice mentioned above explains why many news reports have already suggested that President Xi Jinping would certinly continue to hold three key positions – the President, the CPC General Secretary, and the Chairman of the Central Military Commission. This “trinity” of the leading position in the state, Party and military is undoubtedly crucial to the political stability and strong leadership of mainland China.

It has been widely reported that Premier Li Keqiang would highly likely step down from the Premier position because he has already served two terms. In fact, Li in March 2022 openly said that this would be the last term of his office.

Another Chinese leader who would highly likely step down is Wang Qishan who is now seventy-three. It remains to be seen whether Li Keqiang may take over from Wang as the new Vice President. If Li would become the Vice President, it would mean that President Xi and his protégé highly respect the work done by Premier Li.

Currently, the seven members of the PSC have an average age of 68 – a bit older although they are all very experienced. They are 69-year-old Xi Jinping, 67-year-old Li Keqiang, 67-year-old Wang Yang (Chair of the Chinese People’s Political Consultative Committee, or CPPCC), 68-year-old Han Zheng (State Council’s Vice Premier in general affairs), 72-year-old Li Zhanshu (Chair of the Standing Committee of the National People’s Congress, or SCNPC), 67-year-old Wang Huning (Secretary of the CPC Secretariat), and 65-year-old Zhao Leji (Secretary of the Central Discipline Inspection Committee, or CDIC). Given the elderly nature of the PSC composition, two scenarios would occur: (1) a gradually arranged process of retaining the younger Zhao Leji and the more experienced Wang Yang and Wang Huning, but letting Li Keqiang, Han Zheng and Li Zhanshu to step down (three new positions in PSC); and (2) a more drastic revamp retaining perhaps only Wang Huning or Zhao Leji but injecting at least five new members into the PSC so that a smooth leadership succession would take place in China under the leadership of President Xi Jinping.

If the first scenario would take place, then Wang Yang, who had rich experiences in the State Council, and who had governing experiences as a party secretary in both Chongqing and Guangdong, may take over from Li Keqiang as the next Premier. However, given that Wang is already 67 years old, his possible premiership would likely be a short-term one lasting for only five years – continuity would be an issue if he were selected to take over from Li Keqiang as the premier. Moreover, it would be a bit unconventional for a chairperson of the CPPCC to be transferred to the position of premier.

Wang Huning as an ideological architect in China would likely be promoted to Vice Premier or perhaps the Chair of the SCNPC if he continues in the PSC. Zhao Leji, who has been playing a key role in China’s anti-corruption drive eliminating the unclean leading cadres and officials, would also likely be nominated for the position of the Chair of the SCNPC or the State Council’s Vice Premier, depending on how the top leaders arrange their own division of labor in a new political set-up.

The second scenario, however, is more likely for two reasons. A more drastic revamp would groom the new and younger leaders to succeed the generation of such leaders as Xi Jinping and Li Keqiang. President Xi, as with the previous presidents such as Jiang Zemin, will undoubtedly be the core leader of the CPC guiding the Party and overseeing its younger leaders at least in the next five years.

Hu would have a strong possibility of becoming the premier succeeding Li Keqiang, partly because of his younger age and mainly because of his rich governing experiences in Hebei, Inner Mongolia and Guangdong. Moreover, Hu rose up from the Communist Youth League (CYL) – a career pattern sharing the experiences of Li Keqiang. If Li Keqiang steps down from the premier position, it is possible that he might have recommended Hu to succeed his eminent position.

Ding Xuexiang has been serving as a significant political aide to President Xi Jinping for a number of years. In 2007, the 45-year-old Ding was a political secretary of Shanghai city’s party secretary Xi Jinping. In October 2017, Ding became a Politburo member and the secretary of the Central Secretariat, a prominent position assisting the President and CPC General Secretary Xi Jinping. In the recent months, Ding’s name has often appeared in the mainland media. All signs are now pointing to his rise to the PSC as an important member, with the possibility of taking over from Zhao Leji as the secretary of the CDIC. Ding’s political future is bright.

Another three rising stars are Chen Min’er, Li Qiang and Huang Kuming. Chen Min’er and Li Qiang were often reported in the media before the 19th Party Congress, but they were eventually not coopted into the PSC. However, if the CPC leadership is keen to groom younger leaders in the coming five years, both are tipped to join the PSC as new members with bright prospects.

Finally, Huang Kunming as the leading publicity official of the CPC would also have a good chance to be coopted and promoted to be a member of the PSC, especially as the ideological architect Wang Huning is now 67 years old.

There are other candidates, who are currently Politburo members, having the chance to be “promoted” to the PSC. They are Li Xi, party secretary of Guangdong, and Li Hongzhong, party secretary of Tianjin. Yet, both are 66 years old and do not appear to be the hot contenders going into PSC.

No matter whether Li Keqiang would be arranged to be the Vice President or the Chair of the SCNPC, it is likely that his political influence would persist.

In conclusion, although China’s leadership succession is marked by uncertainties from the perspective of recent political practices at the top, we can still predict two scenarios for the personnel changes in the membership of the Politburo Standing Committee. The first scenario would be minimal changes, while the second one would entail the injection of more young blood into the top echelon. The second scenario appears to be more likely, mainly because President Xi Jinping would undoubtedly be the core leader, as reported widely in the mainland media, guiding China into the next phase of social, economic and political development. If this analysis is accurate, then Hu Chunhua and Ding Xuexiang would very likely be the next generation of young and politically important Chinese leaders in the years to come.