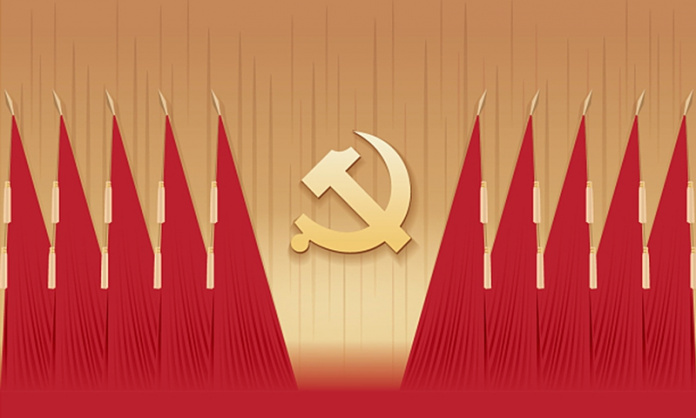 Prior to the opening of the 20th Congress of the Communist Party of China (CPC) on the morning of October 16, two important meetings were held, including the Seventh Meeting of the 19th Central Discipline Inspection Committee (CDIC) on October 7, and the Seventh Meeting of the 19th Central Committee (CC). The two meetings of the CDIC and CC were politically significant, laying the foundation of the 20th Party Congress.

The Seventh Meeting of the 19th CDIC witnessed the participation of 129 CDIC members, while four members were absent including the suddenly passed away mayor of Tianjin, Liao Guoxun, and the state food and strategic reserve administration chief, Zhang Wufeng, who was under investigation.

A 256-word report was issued after the CDIC meeting, saying that it promoted “high quality development of discipline inspection work in a new era,” that its members studied and implemented “Xi Jinping’s new era socialism thought during the new era,” that it implemented “the strategy of self-revolutionary strategy” by protecting the authority of the Party and centralizing the Party leadership, and that the committee “resolutely and seriously governed the Party.” The CDIC also plays the role of “supervision, safeguard and implementation” from the perspective of national work, thereby “forcefully and effectively serving and protecting the big circumstances of modernization and construction.”

The report mentioned that from 2018 to 2020, about 189,000 cases of disciplines in dealing with poverty areas and party’s work style were investigated, including disciplinary action against 95,300 members who had problematic discipline, and embracing penalties targeted at 92,700 party members who were involved in corruption during poverty alleviation work. From the 19th Party Congress to April 2022, altogether 496,000 cases were investigated, involving 456,000 CPC officials who were punished. The CDIC utilized not only political supervision but also regular inspections to build up a database on disciplinary issues.

During the Xi Jinping era, China has been working strenuously to pursue and punish corrupt party members through the diligent work of the CDIC. If anti-corruption campaigns are a hallmark of China under Xi Jinping, they have important implications. Officials involved in corruption, bribery and abuse of power were removed from office or punished. The CPC, according to Xi Jinping, must maintain its purity against the corrupt elements, who must be rooted out, punished and purged. In his writings and speeches, Xi Jinping attached foremost importance to the purification of the superstructure, which includes ideas, culture and art, which have to be socialized and remoulded in such a way as to maintain the socialist ideology of the entire nation. As he said in the 18th Party Congress in 2012, “anti-corruption is an important political struggle that cannot and should not be lost.” Corrupt party members were punished and purged in the past, including former secretary of the central political and legal affairs commission Zhou Yongkang, former Chongqing party secretary Bo Xilai, former Chongqing party secretary Sun Zhengcai, and former chief of the Chief Office of CPC Ling Jihua.

If rectification campaigns were launched by CPC leader Mao Zedong in the past to identify, marginalize and root out those elements opposing Mao’s policies, anti-corruption campaigns have been fully utilized by President Xi and his supporters to eliminate all those rotten apples delegitimizing the CPC. President Xi has often mentioned the need to struggle in his recent speeches, meaning that the CPC must undergo permanent struggles against its own enemies, especially those corrupt party members who discredited the CPC and who failed to uphold the highest values of clean governance as demanded by the Party.

The CDIC meeting was followed by another important CC meeting on October 9, during which the CPC General Secretary Xi Jinping delivered a work report and in which Politburo Standing Committee member and ideological architect Wang Huning explained the amendments to be made to the draft constitution of the CPC. The official media did not mention the details of the amendments.

However, it was expected that Wang might formulate some new developments of the Party’s theoretical innovation. So far, the CPC’s Party Constitution was amended for ten times from 1987 to the 19th Party Congress in 2017.

As early as August, 2022, CPC General Secretary Xi Jinping mentioned that since the 18th Party Congress, the Party and the national enterprises had already “made historical achievements and historical changes as well as reforms.” Moreover, the CPC has “succeeded in promoting and developing the Chinese style of modernization.”

In recent weeks, the CPC Publicity Department has shown two CCTV television programs, including “holding the rudder and steering far away” and “scientific directions.” The program on “holding the rudder and steering far away” emphasized Xi Jinping as a core leader, while “scientific directions” centres on Xi Jinping’s thought. Hence, President Xi as providing core leadership and his thought are expected to be highlighted in the 20th Party Congress.

The Seventh Meeting of the CC was opened in Beijing on October 9 and was closed on October 12. According to Sing Tao Daily in Hong Kong (Sing Tao Daily, October 10, 2022, p. A12), “two protections” would likely be written into the amendments of the Party Constitution, including (1) “resolutely protecting General Secretary Xi Jinping as the core of the Party Centre and his core status in the whole Party,” and (2) “resolutely protecting the Party Centre’s authority and centralized and united leadership.” Moreover, the Party Constitution would likely incorporate the description of “China’s complete reunification,” implying that some important statements on Taiwan would be made.

Naturally, the Party Congress will emphasize the success and achievements of the CPC. In late July, when General Secretary Xi Jinping delivered a speech to the leading cadres who would participate in the 20th Party Congress, he had already mentioned that the CPC overcame many difficulties, achieved many matters, and resisted lots of challenges, including those challenges from politics, economics, ideologies, the natural environment. He added that the new era of China in these ten years has witnessed “great changes and reforms and that the Chinese national development has a watershed significance in the history of the Party, the history of new China, the history of reform and openness, the history of socialism, and the history of the development of the Chinese nation.”

On October 15, General Secretary Xi Jinping is holding a preparatory meeting of the 20th Party Congress. The preparatory meeting is expected to approve the composition of the Presidium of the 20th Party Congress, including the lists of chairpersons, executive committee members and secretaries. It remains to be seen whether the Presidium of the chairpersons would include the former President and CPC General Secretary Jiang Zemin and former leader Hu Jintao.

According to Sing Tao Daily (October 15, 2022, p. A4), Guangxi representatives who went to Beijing had already been mobilized to understand “two affirmations, namely Xi Jinping as the core leader of the Party centre and the leading position of “Xi Jinping new era Chinese socialism thought.” The Liberation Daily also said that the representatives attending the 20th Party Congress “will in their thought, in politics and in action maintain high unity with the idea of Comrade Xi Jinping as the Party centre’s core.” These “two affirmations” are expected to be written into the amendments of the Party Constitution.

Another focus of the mainland, regional and international media will be the membership of the Politburo Standing Committee (PSC), which currently has seven members. All eyes are focusing on who will be the new blood being nominated and appointed into the PSC. Ding Xuexiang, the 60-year-old director of the CPC General Office, appears to be a rising star with tremendous loyalty to the Party. He has already pledged his allegiance to General Secretary Xi Jinping. The role of the director of the CPC General Office was traditionally important, including former Premier Wen Jiabao and former PSC member Zeng Qinghong, who dealt with the daily but important Party and state affairs. Ding as a close protégé and aid to CPC General Secretary Xi Jinping has a high chance of being groomed as one of the successors to Xi. Another strong candidate is Hu Chunhua, who is only 59 years old and who has been adopting a low profile, but he is endowed with rich administrative experiences in Tibet, Inner Mongolia, and Guangdong. Hu would likely have a good chance of succeeding Li Keqiang as the next premier.

In conclusion, the political prelude and etiquette leading to the 20th Party Congress have already been completed. The 20th Party Congress is expected to be the most important event in China under the Xi Jinping era, partly because it will show how the Party Constitution will be amended and partly because the potential successors to General Secretary Xi in the coming years would emerge in the new composition of the PSC. Most importantly, General Secretary Xi Jinping’s core leadership and thought would likely be incorporated into the amendments of the Party Constitution, thereby consolidating the legitimacy of the CPC leadership, and endowing with him a very high degree of respect and dignity as with the previous CPC leaders Mao Zedong and Deng Xiaoping.