Just before this magazine went to press, Gross Domestic Product statistics for the first quarter went public. It is the first official data about the economic performance this year. Although, as usual, this data is likely to be adjusted in the coming months, we are in a better position now to gauge the economic recovery.

After the pounding of last year, it is tempting in these times to get carried away by the percentages game. As other indicators suggest, if the economy is on a recovery path, we must expect positive changes in most GDP variables. And, as some of the leading components fell so much last year, we may start to see some stabilization or even “giant” leaps (hopefully), especially in the second quarter.

At this point, all analysis requires two caveats. First, there are inherent difficulties in comparing directly the first quarter of this year with the same period last year. Remember, the first month in 2020 was still a mostly ordinary month. The big crash came in February and March, when the economic activity fell to figures amounting to one-third of what they used to be. In the absence of monthly data, comparisons to last year’s first quarter must bear that cut-off event in mind or else they can become easily misleading.

Second, we want to know if and how fast the economy is returning to a level of operations that may be deemed normal or, at least, viable. For that purpose, the reference is 2019. How fast are we getting back there? Is the apparent recovery in the latter part of 2020 consolidating?

That said, these are a few first impressions which the main GDP aggregates suggest. In real terms, GDP dropped by less than one percent. That’s better news than it might seem at first sight. Suppose we assume that the January 2020 GDP would be roughly in line with the correspondent value in 2019. In that case, the apparent stalling of the economy in this first quarter hides a significant homologous growth for the months of February and March. That is in line with the recovery seen in the last quarter of last year. But that cannot hide the fact that the GDP is still half of what it used to be. The same type of reasoning can apply to most of the GDP components.

The mainstay of the economy is still far from the pre-pandemic levels. Exports of services, which are mainly gambling-related revenues, are booming compared with the darker months of 2020. However, they still hang at less than one-third of their previous heights. In the absence of significant change, questions will increasingly pop up about the sustainability of the sector’s existing configuration and size and control the corresponding fixed costs. And considerable concerns exist about how the continuation of such a situation may impact the labor market in particular.

For the time being, there can be no deliverance brought about by the investment side. The compounded uncertainty about the reopening of the territory and the future of current concessions means private investment is mostly on hold. A little discretionary increase in public investment, mainly public works, can only do so much. Anyway, the timing and extension of its impact are debatable and certainly not felt immediately.

That leaves us essentially with consumption. Private consumption is mostly holding on, and that might already be better than expected under the prevailing uncertainty clouds. Public consumption instead is decreasing.

Indeed, the economy is improving, however unsteadily. But we’d better come up with a re-ignition plan, as a prolongation of the current status may mean delaying but not preventing a rising economic pain and long-term social damage.

August 3, 2021
Health authorities have revealed that a local man already inside the SAR borders has tested... 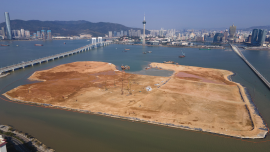