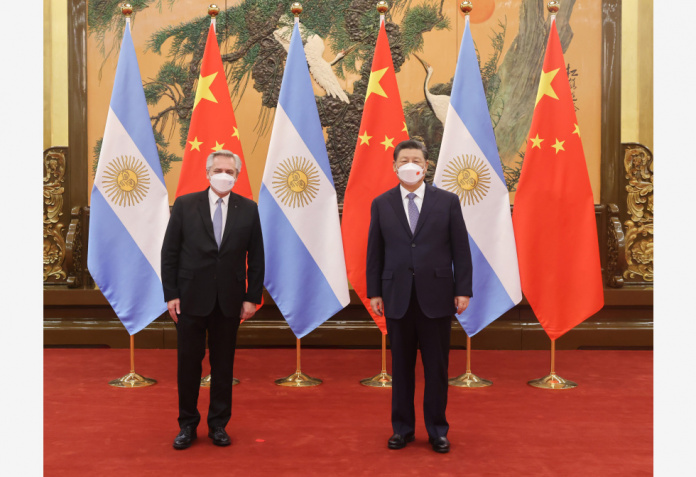 On February 6, the Chinese President Xi Jinping met the Argentinian President Alberto Fernandez in Beijing and both sides signed not only a Joint Statement on the deepening of their comprehensive partnership for the coming 50 years, but also a Memorandum of Understanding on cooperation within the framework of the Belt and Road Initiative – documents whose content has significant implications for the relations between China and Argentina.

The key areas of the Joint Statement include mutual agricultural cooperation from 2022 to 2027, enhancing dialogue, action and innovative development in the realms of agricultural and biological production and investment. Moreover, both sides enhance nuclear energy cooperation in a strategic manner, encouraging the development of nuclear medical science and the exchange of radioactive nuclear technology so that the space programs of the two countries will be strengthened from 2021 to 2025. At the same time, Argentina and China signed a series of cooperative agreements over green development, digital economy, aviation, aerospace, BeiDou Navigation Satellite System, high-tech innovation, education, earth science, public media, cooperation between universities, peacekeeping mission, military and defense collaboration, sports and tourism. Finally, both sides emphasize the importance of setting up regular committees to oversee developmental issues, including the protection of the Southern Ocean and the preservation of ocean resources

Both sides affirmed their mutual support of their sovereign interests. Argentina will continue to adhere to the one-China principle, while China continues to back up Argentina’s demand for the full exercise of its sovereignty over the Malvinas Islands and the resumption of negotiations to bring about a peaceful settlement of the sovereignty dispute over the Islands in accordance with the resolutions of the United Nations.

The Joint Statement also says that both sides agree that G20 constitutes an important forum for international economic cooperation, and that such a forum would need to strengthen cooperation and communication in monetary and financial exchange, and that it should promote global economic recovery and sustainable development under the condition of controlling the spread of Covid-19 and its variants.

On February 5, President Fernandez visited to the Museum of the Communist Party of China (CPC), “paying high tribute to the CPC for all it has done and the great achievements it has made for the Chinese people” (Global Times, February 6, 2022).

Argentina and China signed the Memorandum of Understanding (MOU) to promote the construction of the Silk Road Economic Belt and the 21stCentury Maritime Silk Road, laying down a firm foundation for sustainable development and mutual economic cooperation. Trade relations and economic diversification are going to be enhanced between the two countries in the coming years.

During the meeting with President Fernandez, President Xi emphasized that China is willing to cooperate closely with Argentina in the United Nations and G20 to implement multilateralism, improve global governance, and strive for global sustainability (Wen Wei Po, February 7, 2022, p. A13). President Xi congratulated Argentina for being the presidency of the Southern Common Market (Mercusor) in which Argentina, Brazil, Paraguay and Uruguay are the full members. President Xi added that China is keen to promote the China-CELAC and “the common destiny for the mankind.”

In response, President Fernandez affirmed the need for both countries to enhance cooperation in all areas mentioned in the Joint Statement, while welcoming China to invest more in Argentina. He remarked that Argentina works closely with China to implement multilateralism and promote “the common destiny for the mankind.”

Both sides agree to expand the scope of bilateral trade, while Argentina would help China promote its exports to Argentina through its financial and monetary support of the export account settlement. The Argentinian side hopes that a consulate can be established in Sichuan province so that its work will cover the Guizhou province, Shaanxi province, Yunnan province and Chongqing city, thereby deepening bilateral cooperation – an expectation that China expresses its support.

The Sino-Argentinian Joint Statement and the agreements reached by both countries have important implications.

First, China attached immense importance to its relations with Argentina and their economic, military and space development projects have been expanding rapidly in the recent years. In December 2021, Argentina and China agreed to work closely on the Neuquen space station and to develop a nuclear power plant in Argentina. China decided to enhance its research at the CLTC-CONAE Deep Space Station in the city of Neuquen, which supported the mission to the moon by the Chang’e 5 exploration where China was successful in returning the samples of soil and rocks to the earth. Both countries agreed to conduct research and further experiments for the sake of understanding the Moon deeper. As such, the space cooperation plans for both countries are technologically significant. Both countries will deepen cooperation in space science, earth observation, satellite data development and human resource training.

Third, the exchange of political interests is prominent in the content of the Joint Statement from an analytical perspective. While Argentina supports the one-China principle, China backs up Argentina in the latter’s sovereignty claim over the Malvinas Islands. Immediately, the British Foreign Secretary Liz Truss said on February 7 that “China must respect the Falklands’ sovereignty” (The Guardian, February 7, 2022). The way in which the Sino-Argentinian Joint Statement expressed the sovereignty interests of both sides was interestingly similar to that of the most recent Sino-Russian Joint Declaration in which Russia also supports the one-China principle whereas China implicitly supports Russia’s position on Ukraine.

Fourth, the military cooperation between the two countries is destined to enhance further. In October 2021, the Chinese State Councilor and Defense Minister General Wei Fenghe discussed with the Argentinian Defense Minister Jorge Taiana through a video meeting in which both sides were determined to consolidate anti-epidemic cooperation and enhance high-level military exchanges, personnel training, medical care and international peacekeeping. Together with space cooperation, the military collaboration between the two countries is going to have strategic and national security significance.

Fifth, as global security embraces public health, Argentina’s closer cooperation with China in the combat against the spread of Covid-19 and its variants like Omicron is socially significant. In July 2021, the Argentinian Health Ministry found that the Covid-19 vaccine developed by Sinopharm was 84 percent effective in the prevention of death. As such, in October 2021, Argentina approved the emergency use of Sinopharm vaccine for its children aged between three and eleven. The combat against Covid-19 and the effectiveness of the Chinese vaccines have cemented the Sino-Argentinian relations.

Sixth, the Argentinian participation in the Belt and Road Initiative is going to have mutual economic benefits. Argentina will receive Chinese financing for at least US$23.7 billion of which US$14 billion have already been earmarked for various infrastructure projects. On the other hand, China’s Belt and Road Initiative can have a new breakthrough in Latin American while its internationalization of Renminbi can be accelerated and deepened further.

In conclusion, the Sino-Argentinian relations have entered an unprecedentedly close and a new stage in which both sides are enhancing cooperation in all areas, ranging from economy to space exploration, from education exchange to scientific research, from military cooperation to the assertions on mutual sovereignty interests, from mutual investment to the fight against Covid-19, and from multilateralism to the active engagement with regional organizations.