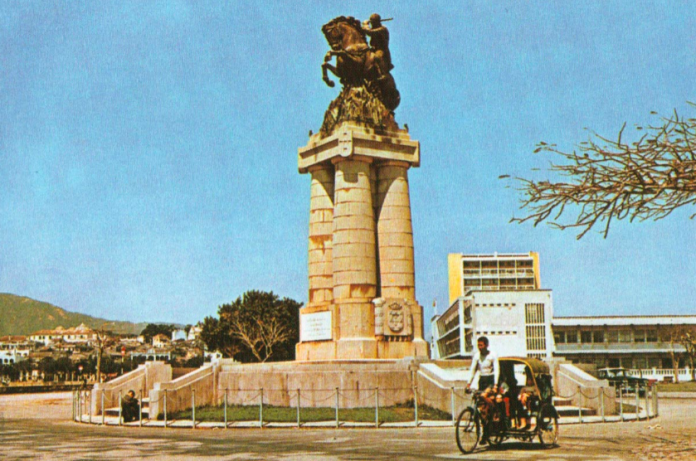 The global debate over the removal or not of statues has become a heatedly discussed topic internationally this year, however, plenty of statue toppling has taken place in Macau.

After the tragic death of George Floyd and consequent anti-racism protests in the United States and worldwide, the debate seems to have evolved into a discussion on which relics or characters of the past would we chose to celebrate.

In Bristol, England a statue of former slave trader Edward Colston was brought down by protesters and then temporarily replaced by one of a Black Lives Matter protester.

All over the US and Europe statues of former kings and businessman were either vandalized or removed over their perceived moral actions under modern eyes.

In Lisbon, Portugal even the statue of Father António Vieira, a 17th-century priest famous for his speeches denouncing slavery abuses in Brazil, ended up vandalized with the words ‘decolonise’.

In Macau, the removal of statues has been more linked to political concerns connected to its Sino-Luso history than character judgements of the historical figures themselves.

The most prominent example would be that of Ferreira do Amaral, the navy officer that acted as Macau governor from 1846 to 1849.

Amaral is known for having demanded that all Chinese residents in Macau pay ground rent, poll tax and property tax, and by expelling all Qing officials from Macau after they protested the decision. This ultimately led to him being murdered and decapitated by a group of Chinese men.

In 1989 Lu Ping, the chairman of China’s Hong Kong and Macao Affairs Office, had demanded its removal because of its ‘colonial symbolism’ and Portuguese authorities wanting to smooth relations between the two sides decided it was best to throw down the statue.

Amaral had always been a sensitive issue for the Portuguese administration considering the way he was viewed by the Chinese community and in 1992 his bronze statue was removed from its pedestal near Hotel Lisboa.

However, in a recent Municipal Affairs Bureau (IAM) Consultation Council meeting one of its members, Chan Pou Sam, suggested that maybe a public consultation should be held over a proposal to remove “colonialist names” from the streets of Macau using Avenida Ferreira do Amaral, one of the cities main avenues, as its main example.

“The names of these streets must be changed because they carry the story of the humiliation of the Chinese people. Governor Ferreira do Amaral was a conqueror and expelled the Mandarins and forcibly collected taxes. He was the author of many evil acts, so many that I can’t even list them here. Therefore, and in order to guarantee the National Security Law, we must consider this change,” Chan defended according to newspaper Tribune de Macau.

The mention to the National Security Law is very trendy but it is a bit perplexing as the local security legislation does not seem to cover judging past deceased officials.

I imagine that the fact that Amaral was murdered and decapitated in 1849 by Chinese men was not enough, the current street name should also be decapitated.

Still, the proposal by the IAM councillor seems to have not elicited any response from the rest of the council.

Another interesting controversial local figure was local army official Vicente Nicolau de Mesquita, who shortly after Amaral’s murder was involved in a victory against Chinese Imperial troops mobilized on the Guangdong Province-Macau frontier and was hailed as a national hero.

However, Mesquita is also infamous for in an act of insanity having murdered his second wife, a daughter and gravely wounded two other of his children, committing suicide afterwards by throwing himself down a well.

Despite his status, he was not honoured with a military burial, nor would the Bishop of Macau allow his remains to be placed in consecrated ground. He still got an avenue named after him and a statue was erected in Senate Square, later promptly removed by rioters during the 1966 12-3 incident.

Local residents have the right to discuss and talk about symbols and statues that they are uncomfortable with considering their historical significance.

This process has taken place in basically every country and region, however, it can be tricky sometimes to judge history from modern eyes.

Does Mesquita deserve to have an avenue named after him in Portuguese and Chinese?

It can be argued that even without the sensitive political considerations, his heinous late-life acts would probably justify a name change. It’s something that is up to Macau residents to decide.

However, when we start making judgements of historical figures their value or contributions are likely not so clear cut. Should we just evaluate all historical personalities who have streets named after them and statues erected and make an evaluation of their moral value? And who would do this evaluation?

It’s hard to judge history. It can be a slippery slope. Just remember that in 200 years maybe society will evaluate your current actions in a completely new light and maybe it will not like what it sees.