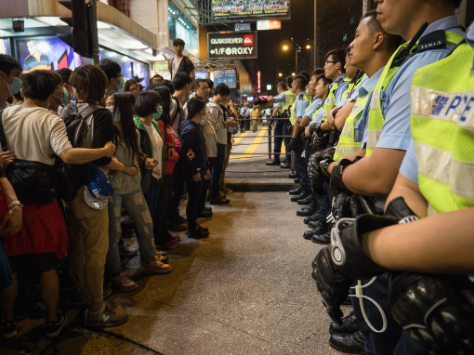 The tragic events on the night of July 21, when a group of radical protestors defaced the wall of the Central Government Liaison Office (CGLO) and the national emblem of the People’s Republic of China, and when a group of white-clad villagers violently attacked passengers in the Yuen Long railway station, have plunged the Hong Kong Special Administrative Region (HKSAR) into an unprecedented crisis of legitimacy.

The violent attacks on the CGLO were condemned immediately by the Director of the Liaison Office, Wang Zhimin, and the HKSAR leadership on July 22.

If a few arrested radical protestors on July 20 were allegedly found to possess dangerous and explosive chemicals, and if some arrested villagers immediately after the Yuen Long terror had suspected triad background, the Hong Kong situation has been worsening to such an extent political violence involves not only extremist protestors but also the triads.

One of the key questions is whether the HKSAR is so ungovernable that the People’s Liberation Army (PLA) would have to be deployed, as a number of commentators in both Hong Kong and mainland have boldly and coincidentally suggested.

Alternatively, should curfew be ordered by the Hong Kong leadership at least in some districts, if not all, so that public confidence in law and order can be restored? If curfew were not used, then should the police continue to allow protestors to hold their marches and protests that perhaps eventually and unintentionally stimulated extremist actions?

If protests have been traditionally seen as the right of many citizens to exercise their freedom of assembly in Hong Kong, any police measure to tighten protests and marches would be easily criticized. If curfew were adopted, would radical protestors ignore it and continue to protest and confront with the police?

Yet, if the PLA were deployed, the feasibility of the “one country, two systems” model in Hong Kong would be seriously undermined.

As such, the police handling of both protests and political violence has to be seen as decisive, swift and effective so as to prevent the current situation from deteriorating further.

Unfortunately, the events in June and July have perhaps exposed the weakness of the Hong Kong police, which are seen by many ordinary citizens as relatively unbalanced in the way in which their operations were conducted in various incidents, ranging from the exercise of force on June 12, the undefended legislature on July 1, the problematic entry into a crowded plaza on July 12, the undefended premises outside the CGLO on July 21, and then the lack of spontaneous and effective response to the Yuen Long attacks on July 21.

Interestingly, the Hong Kong police did not use any water cannons to deal with protestors on June 12, July 1 and July 12.

In the Yuen Long saga, the police officers’ way of handling media questions was severely criticized, leading to unnecessary public speculations on any suspicious linkage between the police at the grassroots level and the village thugs.

Perhaps some police commanders and officers have been lacking very rigorous training on how to deal with both crisis management and media relations simultaneously, relying excessively on public relations officers. In any case, police legitimacy has been seriously questioned by many citizens, plunging Hong Kong into a serious legitimacy crisis.

Any violence has to be condemned, including the actions of radical protestors and village thugs. Tragically and historically, the British colonial authorities co-opted many village elders and representatives, some of whom with suspicious linkages with criminal elements, and turned them into political loyalists.

The same cooptation strategy has unfortunately been inherited by some post-1997 Hong Kong and perhaps mainland authorities, especially those who work in the New Territories where triads are hidden but active. As a result, some netizens are very angry with the questionable and suspicious connections between some official authorities and the underworld.

The Yuen Long terror has undermined public confidence because of the sluggishness of police responses on July 21. The police commissioner on July 22 promised a review of police operations. It is understandable that police manpower was overstretched on the night of July 21, when anti-riot police were deployed to deal with radical protestors in the Western and Central Districts.

Still, the lack of immediate responses from the police in Yuen Long was highly disturbing to many citizens, for some passengers were already injured. Two district councilors in Yuen Long claimed on July 23 that while a mainland Chinese official in the New Territories had appealed to villagers to protect Yuen Long from the entry of protestors, the district police on July 20 had admitted receiving information about a possible attack from village thugs on July 21.

These revelations and assertions were serious, questioning not only the appropriate targets of the PRC’s united front work in the New Territories but also the local police legitimacy. Other angry citizens pointed to the slowness of police arrival at the railway station and, most importantly, the indifferent attitude of district-level police officers’ answers to media questions.

If the Hong Kong situation is ungovernable, then the deployment of the PLA to maintain law and order in the territory would increasingly become a demand articulated by more people than ever before.

Yet, if the PLA were deployed to help the local police impose curfew or restore public order through a declaration of the state of emergency, the “one country, two systems” in Hong Kong would have its image tarnished severely.

Under these circumstances, the pro-independence forces in Taiwan would be politically stimulated further with increasing popularity, thus undermining the PRC’s objective of using “one country, two systems” to appeal to Taiwan for political talks and reunification. Hence, the police leadership in Hong Kong must understand their highly critical role in the very complex political interplay underlying the formula of “one country, two systems.”

Quite fortunately and yet ironically, the Macao situation has seen its frozen political development. The Macao police are maintaining law and order effectively. The PLA was deployed once in August 2017 with public support to help Macao clean up all the debris leftover from the attack of Typhoon Hato.

Still, the Macao police must guard against and combat all the hidden activities of the local triads so as to avoid any possible return to the lawlessness situation in 1998 and the early half of 1999.