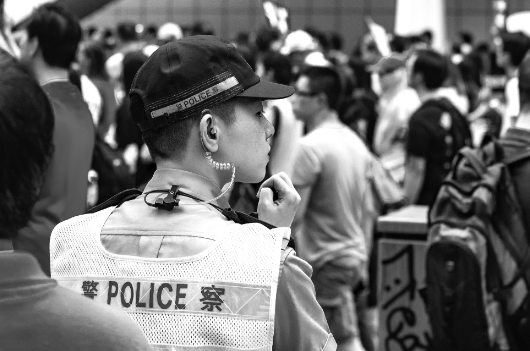 Managing protests is a highly political issue in any city. Hong Kong is no exception to this rule. Since June 12, 2019, the police-protestors relations have been deteriorating. It is an undeniable fact that the police play a very crucial role in maintaining law and order in any society.

However, the way in which the police manage protests can become a highly politically contentious issue, for it involves the political questions of who gets what, when and how. Above all, the police are often a symbol of the regime in power and they become a target of a minority of politically alienated citizens, who vent their grievances at police officers by various means, including peaceful and violent ones.

The Hong Kong situation deserves our attention in several aspects.

First and foremost, the unprecedented utilization of various modes of communication by the protestors to confront the police on June 12, including the use of Telegram groups, Twitch, Airdrop, LIHKG and other means, proved to be quite effective in their collective mobilization and strategic moves.

Some observers labelled the protests as “leaderless,” but the well-coordinated protests showed that there were a loosely organized group of individual leaders behind the scene.

In response to the rapid and effective mobilization of a huge number of protestors, the police had to resort to the use of teargas and rubber bullets to maintain law and order. Indeed, the use of rubber bullets was questioned and criticized by some citizens.

The June 12 confrontation precipitated another more violent event on June 26, when some 1,000 angry protestors surrounded the Wanchai police headquarters, vandalized the building, trapping police inside, blocking the entrances and defacing the walls. The police were quite tolerant, objectively speaking, and the siege ceased miraculously without any violent clashes.

Yet, the rapid escalation of violence took place on July 1 when some protestors plunged into the Legislative Council building and vandalized its facilities. Some protestors escaped police surveillance by using face-to-face mode of communications, making a bold decision of occupying the legislature.

Critics of the radical protestors said that violence should not be used, while critics of the police argued that the undefended legislature was like an empty castle stimulating the radical and vandalizing behavior of protestors. The disputes have deeply divided the society of Hong Kong, bringing about more grievances and accusations from all sides of the political spectrum.

To make situation even worse, the police-protestors confrontation came to a climax on July 15, when some protestors violated the law by occupying some streets. The police eventually cleared the streets but they went into the New Town Plaza, indirectly or directly generating an ugly scene of bitter bodily conflicts with some citizens, including perhaps protestors and non-protestors.

Some people who attacked the police were arrested, while some police officers were injured. The pro-police mass media and politicians accused the protestors and pro-democracy politicians as a “pro-violence faction,” while the pro-protestors media, politicians and citizens criticized the police as “abusing their powers” and “scaring” some citizens in the plaza.

The deteriorating relations between police and protestors in Hong Kong were triggered by the controversial extradition bill, but they were also shaped by other underlying factors, such as the profound public mistrust of both the government and Beijing, the anti-mainland sentiments, the politically alienated young people, the undemocratic political system, the deep socio-economic inequality, and most importantly the mounting public dissatisfaction with the ways in which some young and pro-democracy politicians were treated by the regime in power from 2016 to 2018.

Unless these issues are gradually and strategically tackled by the Hong Kong government one by one, the profound distrust and deep anger of some citizens will persist. Protests will continue to test the already worsening relations between protestors and the police.

Ultimately, the government of Hong Kong may have to reconsider the idea of establishing an independent commission of inquiry to investigate the causes of the entire Hong Kong disturbances from June to July 2019.

Although this idea was rejected by the pro-establishment elites, it appears to be a more effective remedy to calm down all the stakeholders in the society at least in the short run. If not, Hong Kong is going to suffer from a period of turbulence for some time.