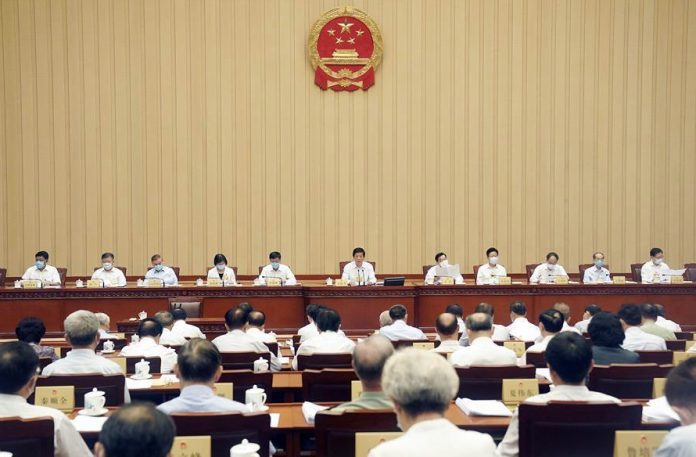 The temporary decision of the Standing Committee of the National People’s Congress (SCNPC) to delay the incorporation of the Anti-Sanction Law into the Appendix 3 of the Basic Law of both Hong Kong and Macau shows not only the need for Chinese authorities to study further, but also the consideration of how to minimize the impacts of the law on the banking sectors of the special administrative regions of Hong Kong and Macau.

According to the sole Hong Kong member of the SCNPC, Tam Yiu-chung, the delay meant that the central authorities need more time to conduct their study of the law and its ramifications, and that the Chinese government supports Hong Kong to continue to be an international financial and monetary center.

By implications, some officials of SCNPC of the People’s Republic of China (PRC) are concerned about the impacts of the anti-sanctions law on the financial and monetary center of Hong Kong. If Macau is going to develop its new securities and bond center in the coming years, whether the integration of the anti-sanction law would affect Macau economically would need more careful and in-depth study.

Tian Feilong, an associate professor at Beijing University of Aeronautics and Astronautics, has commented that the Anti-Sanctions Law affects the stability of Hong Kong’s economy and commerce and the confidence of investors. As such, a “very careful” consideration is necessary. Lau Siu-kai, vice-president of the Chinese Association of Hong Kong and Macau Studies, has remarked that it is uncertain what methods would be used by the central government to deal with the sanctions from foreign states after its in-depth study, that it remains unclear whether the Anti-Sanctions Laws would be incorporated into the Basic Law, and that administrative measures would perhaps be used instead of utilizing the Anti-Sanctions Law directly.

Article 12, if incorporated into the Basic Law of Hong Kong and Macau, would likely trigger court cases between mainland individuals and organizations, especially foreign banks, which may carry out the sanctions imposed by foreign countries. Cross-border legal disputes would likely increase, leading to more complex operations in the financial and monetary sectors than ever before.

Article 14 says that any organization and individual who does not implement or conform to the Anti-Sanctions Law would be pursued on their legal responsibilities. This Article, if incorporated into the Basic Law of Hong Kong and Macau, would also trigger more legal cases than before.

It is worried that a strict implementation of the Anti-Sanctions Law, if it were integrated into the Hong Kong and Macau Basic Law, would likely undermine the confidence of some, if not all, foreign investors, especially bankers.

On August 17, when the SCNPC meeting convened, Hong Kong Chief Executive Carrie Lam said that the attempt at integrating the Anti-Sanctions Law into Hong Kong had already caused some anxieties, and that she had suggested the central government to implement the law through the enactment of a local legislation in the Hong Kong Special Administrative Region (HKSAR).

Some observers expressed their concern that, under the circumstances in which the Anti-Sanctions Law were incorporated into the HKSAR Basic Law, if US banks are required to carry out sanctions imposed by the US government, such implementation would surely encounter anti-sanctions measures adopted by PRC and HKSAR authorities. If so, these US banks would likely become legal-political sandwiches. Some of them would eventually prefer to leave the HKSAR, thereby causing impacts on Hong Kong as an international financial and monetary center.  Some elites in the financial and monetary sector have lobbied the HKSAR government to see whether exemptions would be made to minimize the scope of the impacts.

One interpretation of the delay in incorporating the Anti-Sanctions Law into the Basic Law of Hong Kong and Macau is that the central authorities might test the opinions of the foreign investors and bankers as well as the local financial and monetary elites. This testing balloon does not mean that the Anti-Sanctions Law would not be implemented in Hong Kong and Macau, but the scope of its implementation would perhaps be adjusted and the way in which the law would be implemented may be delegated to the local authorities.

Tian Feilong added that one challenge is to decide whether some foreign enterprises would be allowed to apply for exemptions from the Anti-Sanctions Law if the law were incorporated into Hong Kong and Macau. Moreover, if local legislation were enacted in Hong Kong and Macau, the unresolved issues include how would such local legislation be made in conformity with the nation-wide sanctions procedures and what would be the central-local institutions responsible for coordination work. These are important technical issues that remain to be resolved. Tian, however, stresses that it remains imperative for the Anti-Sanctions Law to be injected into the Hong Kong setting, because the HKSAR alone cannot cope with the sanctions from the US.

A Hong Kong legislator remarked that the outcome depends on the Sino-US relations, which may be affected by the ongoing political crisis in Afghanistan, and that the delay in incorporating the Anti-Sanctions Law into the HKSAR may be “good.”

The initial response from the Hong Kong banking sector is that local banks generally welcome the temporary postponement of the law. Nevertheless, some professionals in the banking sector believe that the delay is merely temporary. They still worry about the technicalities of implementing the Anti-Sanctions Law in Hong Kong.

If the Anti-Sanctions Law were incorporated into Hong Kong and Macau’s Basic Law, the local institutions, their responsibilities, and their coordination with the central government would need to be spelt out. Article 4 of the Anti-Sanctions Law says that the departments concerned under the PRC’s State Council can decide the name list of those individuals and organizations directly or indirectly implementing the discriminatory and restrictive sanctions measures from the foreign governments. The institutions on the Hong Kong and Macau side working with the State Council remain to be delineated, although the local Monetary Authority and the national security apparatus will likely be expected to play crucial, investigatory and coordinating role.

In conclusion, regardless of whether the attempt at incorporating the Anti-Sanctions Law into the Basic Law of Hong Kong and Macau represented a barometer of testing the elite opinion in the local financial and monetary sector, such attempt has already aroused the anxieties of the elites in the financial-monetary industry, not to mention the confidence of some foreign bankers and investors. If the HKSAR is to maintain its financial and monetary status, and if Macau is going to build up its new securities and bond center in the coming years, it needs more time for the PRC authorities, together with the local officials of Hong Kong and Macau, to study the ramifications and impacts of the law on the local financial and monetary sector. At a time when a more determined approach is adopted by the HKSAR authorities to protect national security by actively pursuing those people who violated the law in the 2019 protests and who participated in other illegal activities, and at a juncture when some Hong Kong people vote with their feet by leaving the city, a more sweeping approach of handling the Anti-Sanctions Law in Hong Kong would perhaps become a heavy dosage of medicine with detrimental impacts on not only the confidence of foreign investors but also the worries of local monetary and financial elites. Buying time to study the impacts is the best approach of tackling the ongoing anxieties at least in the short run.

September 30, 2022
A passenger on board a Myanmar domestic flight was shot in the face Friday when...
Load more