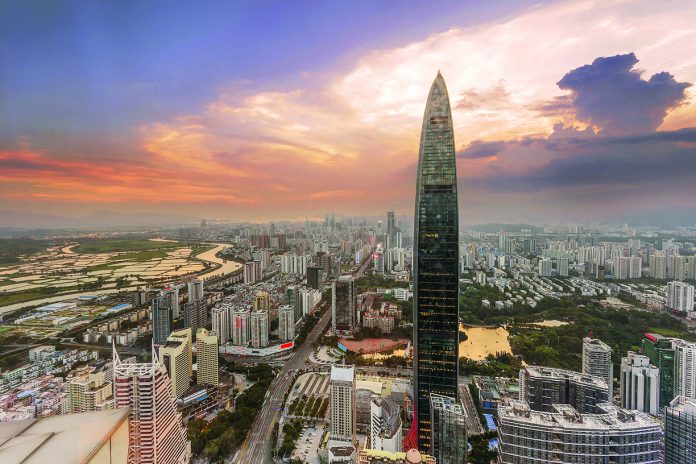 Recent political and economic developments in Shenzhen have shown that the southern Chinese city is well positioned and prepared to be a powerful economic locomotive driving the entire economic growth of the Greater Bay Area (GBA) in the coming five years, having immediate implications for the repositioning and strategic planning of the Hong Kong and Macau Special Administrative Regions.

On April 7, the Seventh Party Congress in Shenzhen was held, with the city’s party-secretary and Guangdong’s provincial deputy party-secretary Wang Weizhong delivering a report on Shenzhen’s economic development in the coming five years. First, after President Xi Jinping’s visit to Shenzhen in October 2020, the year 2021 is witnessing Shenzhen’s beginning role as a “vanguard demonstration point” for “comprehensive development” in the GBA from 2021 to 2025. As such, the party and its leading cadres in Shenzhen are playing a pivotal role as the “vanguard” of “socialist modernization.” Ideologically, the party cadres need to uphold the necessary consciousness and self-confidence to achieve socialist modernization. They are required to achieve breakthroughs by improving the quality of the entire city, developing the people’s livelihood, adopting reforms in “ecological civilization” and consolidating anti-poverty work.

After setting the political tone and direction of Shenzhen’s development, the report emphases the importance of Shenzhen to become an international city through technological innovation and cultural soft power. The development of 6G is regarded as Shenzhen’s future industrial focus, occupying 5 percent of Shenzhen’s GDP in research and development. The brand name of Shenzhen will have to be publicized and expanded in all its products by making use of the country’s “internal big circulation” and “international double circulation.” In other words, in the process of controlling the spread of Covid-19, Shenzhen needs to fully utilize the huge internal market of China while fostering its external trade and multilateral relations with other countries and international cities.

Geopolitically, Shenzhen must elevate its “high quality developmental high ground,” promote high quality innovation, deepen the constructions of the GBA, elevate the standard of “market integration between Shenzhen, Hong Kong and Macau,” generate a Shenzhen-Hong Kong “double cities’ economy,” and create a cooperative platform to foster the integration of different regions, including the relations between Guangdong and Shenzhen. Strategically, Shenzhen must “move eastward, coordinate with the western regions, forging linkages with the southern parts, expanding to the north, and achieving excellence in the central areas.” The process of curbing poverty will have to be accelerated to enhance the rural-urban interactions. In this way, the city of Shenzhen will become an innovative ecological chain integrating development, fostering technological and monetary integration, and accelerating industrial developments. It will position itself as a place for accumulating talents to become a first-class world technological innovation hub.

Clearly, Shenzhen must become a leader in Southern China to steer the direction of technological, talent, ecological, and industrial development. But the city has to strengthen its own governance by improving how the society and public administration are managed. As such, law must be enacted to foster technological advancement; law must be implemented seriously, and citizens must abide by the law to remake Shenzhen as a governance charactered by “the rule of law.” Citizens will have to build up their confidence in the legal system and Shenzhen will have to become a model city of “the rule of law” in mainland China.

Shenzhen will, according to the report, have to be “open and tolerant” and strive for excellence in its public services, cultural products and other new cultural and media products. The idea of “the people as the center” must be cultivated in the psyche of the ruling elites so that students, workers, patients and the elderly and the poor will be taken care of effectively. Public services will have to be improved and perfected. A comprehensive social protection system will have to be created together with a green economy and society. Under these circumstances, the people in Shenzhen will enjoy a wealthy city and society as co-producers and co-workers.

The tone of the entire report is quite socialist and egalitarian. Rumors were rife that a batch of eighteen cadres lost their positions recently due to their failure to curb the rising property prices in Shenzhen. If the rumors were accurate, the perfection of governance is high on the agenda of Shenzhen’s political economy of development.

The report has strong political overtone, emphasizing the political correctness of the Shenzhen leading cadres and party officials, who are expected to uphold the vision, mission and thoughts of President Xi Jinping. The resolution of the Party Congress calls for all party organizations, all party members, and the masses in the entire city to “unite closely around Comrade Xi Jinping as core party leader.” They all must be bold, determined, fast, and persistent to become the “commanding ship” of the “renaissance of the great Chinese nation.”

In fact, Shenzhen’s recent socio-economic development has been rapid. Out of 13 million residents, 3.9 million people in Shenzhen have been vaccinated as of April 24 – a vaccination rate much faster than Hong Kong. On April 26, the Shenzhen Exchange Bureau simplified the remittance and payment of salaries in foreign exchange currencies to foreigners working and residing in Shenzhen – a process that aims at attracting more foreign talents to work in Shenzhen. Moreover, the Shenzhen education authorities plan to change the city’s nine-year free education to twelve years in 2025. The Shenzhen education department also allows the students studying for associate degrees in Hong Kong to pursue further studies at all the universities in Shenzhen, thereby opening the door to more Hong Kong youths to study in the mainland. Furthermore, the Shenzhen University wants to construct its campus in Hong Kong to facilitate a bilateral exchange of undergraduate and graduate students, while the University of Hong Kong and the Chinese University of Hong Kong have already established their campuses in Shenzhen.

A bridge, namely “Shenzhong passage,” linking Shenzhen with Zhongshan is under construction and scheduled to be completed in the year 2024, shortening the travel time between the Shenzhen Baoan international airport to Zhongshan from two hours to only 20 minutes.

Economically, Shenzhen’s new target is to achieve GDP 4 trillion yuan in the year 2025, an increase of fivefold from 2021. This is a very ambitious target, which if achieved will surely become the most powerful economic locomotive in Southern China. Since April 10, the Lowu government in Shenzhen has introduced digital Renminbi app to facilitate the digital payment and usage of residents.

From April 23 to 25, Vic-Premier and the Director of the GBA Leading Small Group Han Zheng visited Guangzhou and Shantou and encouraged the youth people of Hong Kong to play a more active role in the economic and social integration of the GBA. At the same time, the Guangdong province is encouraged to promote the further integration of Guangdong, Hong Kong and Macau in the regional development, putting the priority on technological innovation. The first quarter of 2021 has witnessed Guangdong’s GDP increase by 18.6 percent, including a 32 percent jump in the investment from foreign, Hong Kong, Macau and Taiwan entrepreneurs (Ta Kung Pao, April 22, 2021). On April 20, Guangdong’s provincial governor Ma Xingrui said that Guangdong, Hong Kong and Macau must accelerate the process of accumulating new resources to “co-enjoy” the rapid development, while Guangdong will accelerate the process of giving preferential treatment to the Taiwan people in their study, residence and health care services.

As Covid-19 is now increasingly under control in the GBA, more Hong Kong people are encouraged to buy their homes in the GBA, a matter publicized in the patriotic media in Hong Kong. About 20,000 apartment units in the GBA are going to anticipate the entry of Hong Kong owners, who are aged between 35 and 45, in the year 2021. Young Hongkongers are also encouraged to develop their careers in Shenzhen, including Qianhai where some young Hong Kong entrepreneurs are starting up their creative business.

To accelerate the process of technological innovation, the University of the Greater Bay Area started its construction in Dongguan on April 22. It will formally admit students in the year 2023, focusing on the disciplines of geological science, advanced engineering and biological science.

In the face of Shenzhen’s rapid development socially, economically and technologically, the implications for Hong Kong and Shenzhen are immediate and obvious. First and foremost, universities in both Hong Kong and Macau must enhance their exchanges and visits with their counterparts in Shenzhen, broadening the horizon of students in the two special administrative regions.

Second, Hong Kong and Macau’s tertiary institutions must enhance the training of technology and innovation among their young people, necessitating more governmental investment in the development of technological innovation. Continuing education programs and on-the-job training courses related to technology and innovation, creativity and culture, and a deeper understanding in all aspects of China, including Guangdong and Shenzhen, must be opened and expanded.

Third, the business sectors in both Hong Kong and Macau must enhance their awareness, networks and linkages with their counterparts in Shenzhen either through governmental introduction or their business associations to prepare for a new economic “take-off” once Covid-19 will hopefully fade away later.

Fourth, while Macau’s economic diversification must be accelerated and deepened by not just talking about into which industries that it should diversify, concrete action and leadership must be shown by a much stronger partnership between the Macau government and the private sector. Macau cannot and will not afford to lag behind in the political economy of competition and coordination in the GBA.

Fifth, similarly, the Hong Kong government must work with the private sector more closely and assertively on how to penetrate the GBA strategically, forging linkages with different occupational sectors in Shenzhen and Guangdong.

In conclusion, during the current phase of controlling the spread of Covid-19, Shenzhen, Guangdong and the Greater Bay Area are now preparing intensively and assertively for a new economic take-off and a new era of socio-economic integration and technological advancement in South China. Under these circumstances, and in anticipation for a gradual relaxation of border control and an incremental process of enhanced human interactions, both Hong Kong and Macau cannot lag behind the vibrant development in the political economy of mutual coordination and competition. Both Hong Kong and Macau must plan and prepare sufficiently for the further development of the Greater Bay Area. Mutual coordination will ensure a win-win situation while mutual competition will equally enhance mutual economic progress in the coming decade.