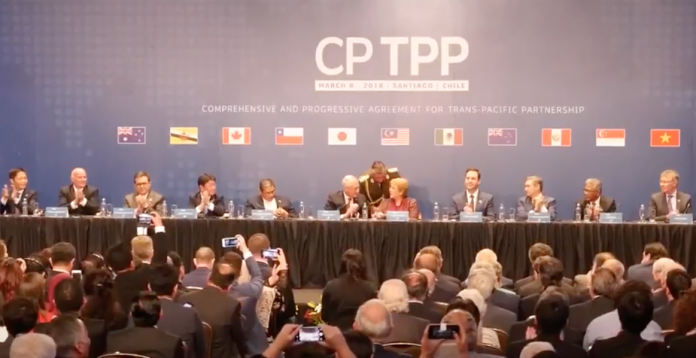 The moves by the People’s Republic of China (PRC) to apply for membership of the Comprehensive and Progressive Agreement for Trans-Pacific Partnership (CPTPP) on September 16 and that by Taiwan to follow suit on September 22 illustrated not only the intense rivalries between the two sides but also the complex domestic and international politics shaping their applications.

The CPTPP is a free trade organization composed of eleven countries, including Australia, Japan, Canada, New Zealand, Vietnam, Malaysia, Brunei, Singapore, Mexico, Peru and Chile. It came into operation on December 30, 2018, after the countries concerned had ratified the agreement in March in the same year. Except for a few agricultural products, almost all other industrial products are exempted from tax in the member states. The CPTPP combines all the economies of the eleven states with US$13.5 trillion or 13.4 percent of the global gross domestic product.

If China were allowed to join the CPTPP, the trade bloc would become much stronger than the present.

China responded to Taiwan’s application for the CPTPP membership strongly and negatively. On September 23, the PRC Foreign Ministry’s spokesman Zhao Lijun said that “we resolutely oppose any state to have official interaction with Taiwan and we resolutely oppose the Taiwan district to join any official agreement and organization” (Ta Kung Pao, September 24, 2021).” Zhao added that there is only one China in the world, that the one-China principle is an internationally recognized principle, and that this principle is the common consensus of the international society.

On September 23, the PRC State Council’s Taiwan Affairs Office spokeswoman, Zhu Fenglian, emphasized that China’s Taiwan district must use the one-China principle to participate in regional economic cooperation. She added China opposes the so-called “international space” as used by the Democratic Progressive Party (DPP) as a means of expanding its trade and commercial relations and conducting “independence” activity (Ta Kung Pao, September 24, 2021). She appealed to other countries in the world to manage the Taiwan question properly and should not provide any convenience and platform for Taiwan’s splittist activities.

Taiwan used the name of “the separate custom territory of Taiwan, Penghu and Kinmen Mazu” and sent its accession form to New Zealand’s Ministry of Foreign Affairs and Trade. New Zealand is a depository state for the CPTPP and responsible for transferring all the applications for membership to all other member states.

Although Taiwan is eager to enter the CPTPP, which would be expected to add 2 percent to Taiwan’s growth rate, the impact on farmers and car manufacturers would likely be tremendous. The National Development Council minister, Kung Ming-hsin, said on September 22 that if countries such as UK, South Korea, Thailand, Indonesia and the Philippines can join the trade bloc but if Taiwan could not do so, the Taiwan economy would witness a drop of its GDP by 0.5 to 0.6.

Taiwan has imposed trade restrictions on the import of Japanese agricultural products, especially those from Fukushima. Its move to apply for CPTPP membership means that Taiwan may have to remove all these restrictions for the sake of lobbying for Japan’s support for its entry into CPTPP. Yet, if Taiwan removes such import restriction from Japan, some local farmers and Taiwanese would likely oppose to such a move.

Taiwan did not apply to join the Regional Comprehensive Economic Partnership (RCEP) in which China is one of the 15 members, but its application for CPTPP membership clearly has political considerations. First, it bypasses China to try joining the huge economic bloc – a struggle for power and “international space.” Second, the ruling DPP appears to make a political gesture to its domestic opponent, the Kuomintang or KMT in which the election of the party chair position was hotly contested between moderate Eric Chu and pro-reunification Chang Ya-chong. The DPP put forward a message that it strives to acquire more “international space” rather than seeking any closer politico-economic relationship with the mainland. Third, the DPP seeks to court the support of Japan to enter the CPTPP. On September 25, the Japanese Minister for Economic and Fiscal Policy, Yasutoshi Nishimura, remarked in a news conference that “we consider Taiwan a very important partner with which we share fundamental values such as freedom, democracy, basic human rights and rule of law.”

Under the DPP rule, the Taiwan authorities have been utilizing the ideological affinity with Western-style democracies, like Japan, to conduct its external relations and to win more international friends. As such, Taiwan’s application for CPTPP membership is a political move, even though the economic value of joining CPTPP would incur agricultural losses to the domestic farmers.

Indeed, the crux of the problem of Taiwan’s attempt at augmenting its “international space” is that the DPP authorities still do not recognize the 1992 consensus reached by the mainland and Taiwan sides.

Critics of the PRC have pointed to its difficulties of meeting the CPTPP’s criteria of membership, including its non-market practices and operation of state-owned enterprises. Nevertheless, some observers believe that, by applying to enter the CPTPP, China is determined to reform its domestic economic practices, pushing forward economic liberalization by various means, such as the continuous reform of state-owned enterprises and the consolidation of intellectual property protection. In other words, the PRC’s application for CPTPP is a means of accelerating and deepening its internal and external economic liberalization. China would likely ratify the International Labor Organization conventions sooner or later, following Vietnam’s practices. In fact, Vietnam has expressed its intention of sharing its experiences with China in joining the CPTPP.

On the other hand, Sino-Canadian relations have just made a breakthrough by the Chinese release of Michael Kovrig and Michael Spavor on September 24, when Huawei executive Sabrina Meng was simultaneously freed from Canada after she admitted her wrongdoing in a fraud case in the US. As such, Canada would not likely be a key country resisting China’s entry into the CPTPP. Rather, Australia and Japan may be two countries relatively resistant to the PRC’s application. Australia has expressed its view that it would not be willing to consider the PRC’s application of CPTPP unless Beijing removes its retaliatory tariffs on Australia’s products. Japan’s open support of Taiwan and its military vigilance of the PRC’s military moves near Taiwan may sour the Sino-Japanese relations, posing as another possible obstacle to China’s entry into the CPTPP.

The US, the ally of Japan and Taiwan, is resisting the PRC’s entry into the CPTPP. Although the US under Donald Trump administration withdrew from the CPTPP in January 2017, its State Department spokesman Ned Price said on September 24 that Taiwan had shown itself to be a “responsible member” of the World Trade Organization, and that “Taiwan’s strong embrace of democratic values would factor in the CPTPP’s parties’ evaluation of Taiwan as a potential candidate for accession.”

In conclusion, China’s application of entry into the CPTPP has met political resistance. Without accepting the 1992 consensus, Taipei has sought to enter the CPTPP; nevertheless, the economic costs of entering the CPTPP are hidden as Taiwan’s agricultural sector would likely be deeply affected. Still, Taiwan authorities are imbued with political calculations, especially as the ruling regime wants to augment its so-called “international space” in front of its domestic supporters and opponents. Yet, the PRC’s application for entry into the CPTPP cannot be underestimated, for Beijing is keen to deepen and accelerate its domestic economic liberalization. Although a few countries may be hesitant to support China’s application for entering the CPTPP, it remains to be seen how Beijing will conduct its united front foreign policy toward all the eleven countries in the CPTPP in the coming years. After all, the application of joining the CPTPP is an important signal of China’s determination to embrace economic globalization externally and continuous economic liberalization internally.