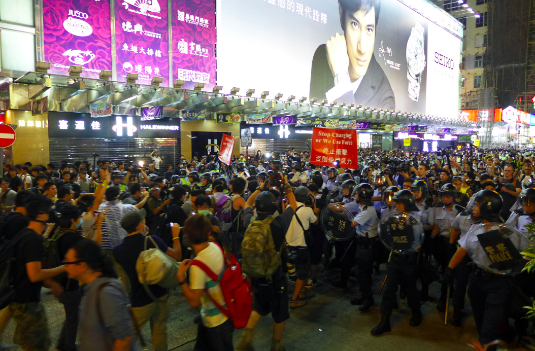 The Occupy Legislative Council (LegCo) movement led by a small group of young people in Hong Kong on July 1, 2019 represented an unprecedented violent event that shocked the entire territory.

Not only was the violent attack condemned by the local pro-establishment elites, but it was also seen by the mainland Chinese officials responsible for Hong Kong matters as politically and legally unacceptable.

On the other hand, a minority of local democrats and young people have demanded that the Carrie Lam administration should exonerate those protestors who confronted the police on an earlier violent protest on June 12 and those radical protestors who vandalized the LegCo building on July 1.

This demand for an amnesty was rejected by Chief Executive Carrie Lam on July 9. Even before her public rejection of an amnesty on the grounds of maintaining the rule of law and judicial independence, the pro-Beijing media had already argued that an amnesty of lawbreakers was unacceptable.

Given the fact that the idea of setting up an independent commission of inquiry into the police handling of the June 12 and July 1 incidents was also rejected by the Chief Executive, and given the inevitable later arrest of some protestors who broke into and vandalized the LegCo building,  more protests will persist in Hong Kong. The police will likely be under more pressure to deal with regular and large-scale protests in a relatively peaceful manner.

What were the roots of political violence on June 12, when the police had to resort to teargas and rubber bullets to cope with protestors, and on July 1, when the protestors vandalized the LegCo building after the police had withdrawn tactically to avoid the possibility of any injuries and deaths?

All these moves were seen by some young people and radicals as proofs of authoritarian repression and political oppression. If institutional violence can be defined as the utilization of political power to cause harm and to exert structural oppression, it did occur in the minds of some young radicals from 2016 to 2019.

Indeed, some pro-establishment elites must point to the 2014 Occupy Central Movement as the culprit and origin of such institutional violence, saying that the movement destabilized Hong Kong in the first place and politicized and radicalized many young people.

However, supporters of the 2014 Occupy Central Movement argued that it was aimed at promoting democracy in Hong Kong and that it rejected a pseudo-democratic model of selecting the Chief Executive.

Second, the crux of Hong Kong’s political violence is that both the pro-establishment and pro-democracy sides develop the tendency of pointing their accusing fingers at each other, leading to not only polarization and hyperpoliticization but also mutual political hatred.

Such political hatred was expressed in the form of vandalism committed by some young radical protestors in the LegCo building on July 1.

If political hate crime was seldom seen in Hong Kong under the British colonial rule, except for the 1967 riots in which some leftists assassinated a radio program host named Lam Bun, it has became increasingly prominent in the Hong Kong Special Administrative Region since the 2014 Occupy Central Movement, and especially on the July 1 vandalised action in the Occupy LegCo movement.

Third, such political hatred of the regime and pro-establishment elites in power was attributable to the seriousness of patron-client politics in Hong Kong after July 1, 1997.

The line between political friends and enemies became so visible that a kind of zero-sum game of politics emerged in legislative politics. The Legislative Council failed completely as an institution that is expected to bridge the communication gap between the ruling elites and the ordinary people.

The democratic opposition within the legislature was seen by the pro-establishment elites as politically “undesirable” and the rules of the game in the LegCo had to be changed to favour the ruling elites. Under these circumstances, politics became radicalized and polarized. No wonder a protestor who pushed a steel cart to break the windows of the LegCo building on July 1 said openly that the “legislature is dead.”

Fourth, the police-protestors relations have turned worse in recent years. Their violent confrontations on June 12 were not ameliorated by the Hong Kong leadership, and the tragedy of a few citizens who committed suicide politically due to their opposition to the extradition bill exacerbated the prospects of political violence on July 1.

None of the principal officials dealing with the bill resigned amidst the so-called accountability system of Hong Kong. As such, the escalation of political violence became uncontrollable from June 12 to July 1, 2019.

If so, what are the remedies of political violence in Hong Kong?

First, the view of politics as a zero-sum game must be changed. All political stakeholders should calm down and reflect on themselves, ideally and critically, so that politics can become a give-and-take exercise. Politics does not mean outright oppression by the economically rich and politically powerful, but it does entail the art of dialogue, diplomacy, and compromise.

Second, political trust must be built up gradually by utilizing more intermediaries, who come from the moderates of the political spectrum. From 2014 to 2019, the political moderates were politically side-lined, socially marginalized, sometimes ostracized and often neglected.

They can be fully utilized to act as the middlemen between the government and the young people, between the ruling elites and the democratic opposition, and between the Chief Executive and some youths. The middle sector in Hong Kong politics should be fully respected and utilized in a more meaningful manner.

The amended ordinance was over-ambitious. The Taiwan authorities found the amended ordinance unacceptable. Many local people have seen the extradition bill as an attempt at persecuting them and transferring the political undesirables to the mainland.

Radicals saw it as a sign of deepening mainlandization of Hong Kong. Foreign countries see it as endangering the human rights of their citizens in Hong Kong. The unpopular policy brought about political violence as some citizens were afraid of its impacts.

The Fugitive Offenders Ordinance was a “complete disaster,” as Carrie Lam admitted on July 9, also because of the lack of its opinion polls. Principal officials who handled this ordinance lacked the necessary political sensitivity to detect large-scale public opposition.

Unlike Chris Patten who utilized his British political advisers to study how they should react to public opinion every day, Carrie Lam dissolved the Central Policy Unit and downplayed the importance of using opinion polls to tap the views of the public toward her government policies. Political advisers should arguably be revived and appointed to assist the Chief Executive urgently.

Hence, both the Hong Kong government and Beijing must reconsider how the local political system can be democratized within their acceptable parameters. Otherwise, democracy deficit in Hong Kong would likely continue to stimulate political violence.

In the short run, it is difficult to calm down the political anger of many young people. The young people of Hong Kong constitute the pillar of its society. Unfortunately, they have developed a sense of political hatred and hopelessness, social immobility, sub-cultural marginalization and economic powerlessness in a capitalistic city where the rich and the powerful are enjoying the fruits of economic hegemony and successes.

As such, the deeper issues of political hatred, social inequality, public housing inadequacy, urban poverty, and youth discontent must be addressed. Otherwise, it remains a myth that Hong Kong represents a success story of social development, economic prosperity, and political instability.

If the underlying and profound socio-political contradictions are not addressed and resolved, political violence would likely be a chronic phenomenon plaguing the politics of Hong Kong in the years to come.