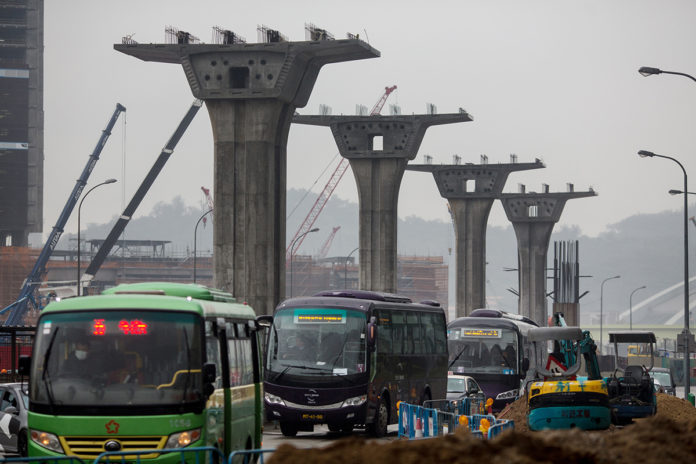 For many tourists visiting Macau, public transport in the city is difficult and chaotic. For some local residents, public transport remains inadequate. The problematic public transport system, according to some legislators, has to be reviewed and revamped urgently, especially in view of the large influx of mainland tourists to Macau during the weekends after the opening of the Hong Kong-Macau-Zhuhai Bridge (HZMB).

Long queues can be easily seen in all bus stops along San Malo, where tourists from the mainland, Hong Kong and elsewhere like to visit the tourist spots and casinos nearby. For the Hong Kong tourists, many of them find that the only two available public buses – numbers 101 and 102 – at the exit of the Macau custom checkpoint of the HZMB to be inadequate.

After a tour bus plunged into a cafeteria in May, legislator Agnes Lam urged the Macau transport authorities that automatic emergency braking and lane departure warning systems should be installed for all vehicles.

Another lawmaker Ho Ion Sang proposed that the government should narrow some roadside planting areas which have become the frequent crossing points for buses. Legislator Wu Chou Kit pointed to the need to enhance the size of signage on Macau’s roads.

Objectively speaking, all these good suggestions were easier said than done. Private and public bus companies must consider financial profitability if they were urged to install safety systems, expecting the government to provide at least some subsidies. Narrowing roadside planting areas would need a study and coordination from different government departments.

Yet, departmental coordination is a constant weakness of Macau’s bureaucracy. Enhancing the signage of roads would also necessitate repair work, which would perhaps have the unintended consequences of disrupting traffic and worsening the already serious traffic jam in many congested areas. Regardless of these practical operational difficulties, the government needs a comprehensive review of the Macau transport system, including both public and private ones.

First and foremost, with the construction and imminent completion of the Light Rail Transport (LRT) in the Taipa section, traffic would hopefully be eased in the Taipa-Cotai areas where many casino resorts are located and attract tourists.

Nevertheless, the government will have to ensure that the LRT should be expanded to the entire Macau peninsula, a move that would be expensive but that would solve a lot of transport problems.

Ho Cheong Kei, the head of the Transport Infrastructure Office, remarked that the Taipa portion of the LRT would be connected not only to the Macau International Airport and the Pac On ferry terminal near the airport, but also to Seac Pai Van in Coloane and to Barra on the Macau peninsula. If these plans were materialized, the LRT system would hopefully be well positioned to improve the transport system in entire Macau.

Second, Macau’s public transport would need a consideration of the introduction of double-decker buses in some areas where streets are wide and buildings are located with sufficient space inbetween them.

Many roads in Macau are so narrow that double-decker buses are inappropriate and they could cause great dangers. Still, the Macau government needs a comprehensive urban design review, especially in view of the fact that urban renewal will be conducted in the coming years.

Double-decker buses provide an important mean through which a large number of tourists could be transferred, say, from the Macau Customs station of the HZMB to some casinos-located areas if the routes along the way are spacious enough.

A constant review of the ongoing passenger load of all the tour buses connecting all the casinos should be conducted and studied so that a better redesign of bus routes and redeployment of tour buses could be undertaken swiftly and efficiently.

In Hong Kong, the opening of the HZMB immediately gave rise to the phenomenon that many mainland tourists flocked to the Tung Chung district, where some local residents jointly complaining about the influx. The Hong Kong solution, namely redirecting many mainland tours to other local districts, can be imitated and adopted in Macau.

Fifth, it is curious that the Macau tourism strategy has neglected the maritime means of diverting and transporting tourists to various parts of Macau. The relatively under-utilized Pac On ferry terminal and its nearby areas can and should be expanded into popular tourist spots so as to attract and divert mainland tourists.

In fact, legislator Ella Lei identified a “deadlock” in Macau’s tourism, saying that more single-day tourists can and will be expected in the development of the Greater Bay Area. These single-day tourists will utilize every second in Macau to visit as many scenic spots as possible. As such, the Tourism Office should strategize further by adding new scenic spots strategically to divert tourists away from overcrowded areas.

As a matter of fact, there is no ferry connecting the Macau peninsula with both Taipa and Coloane Islands. Such a ferry would be an innovative way that can arouse the interest of tourists in utilizing maritime routes rather than focusing on land routes. Actually, legislator Zheng Anting said that the government should think ahead and establish maritime passenger travel between Macau and Taipa, a move that would kill two birds in one stone, namely easing traffic jam on roads and increasing tourist attraction points.

Sixth, the rapid increase in private transport in Macau in the past several decades has shown the rise of the local and affluent middle class, but the traffic congestion in many districts has become far more serious than ever before.

The introduction of an electronic road pricing has never been discussed in Macau, an idea that can perhaps be considered to ease traffic jam in some congested areas. If smart cities are going to characterize the development of cities in the Greater Bay Area, Macau is no exception to this rule. If so, the use of big data and artificial intelligence to deal with the transport problems will only be a matter of time in Macau.

Seventh, given the highly congested nature of the Macau peninsula, it may be a matter of time that the Macau government would have to consider more land reclamation in the coming years. The question of where additional land reclamation should be made will perhaps a socially and politically controversial issue. But if any new Chief Executive has the far-sighted vision to solve the apparently inadequate land supply in Macau, he or she may trigger a review of the availability of land in Macau in a more proactive way in the coming years.

Eighth, the newly established Urban Consultative Committee should put transport high on its agenda for discussion. Gathering views from its appointed members, the Committee should also hold public consultative sessions to find out how local residents feel about the operations and problems of the transport system.

Ninth, a survey conducted by the Tourism Office of tourists’ favorite scenic spots would help the government authorities design solutions to tackle the transport problems. A pro-active approach to understanding the visiting patterns of tourists, both groups and individuals, will be necessary.

Tenth, the Macau government has already implemented a stringent system to check the behavior of some taxi drivers who lacked professional ethics and whose behavior raised the eyebrows of some tourists. Such a system must be carried out strictly so as to protect the good image of Macau as a favorite spot for many tourists from the mainland and Hong Kong. The provision of taxis in Macau appears to improve significantly after the Macau government constantly reviewed its adequacy in the past several years.

In short, the Macau government needs to conduct an urgent comprehensive review of Macau’s transport system by considering and implementing a multiplicity of strategies, both short term and long term, so that Macau’s image of a special casino-based tourism hub will be improved and perfected.