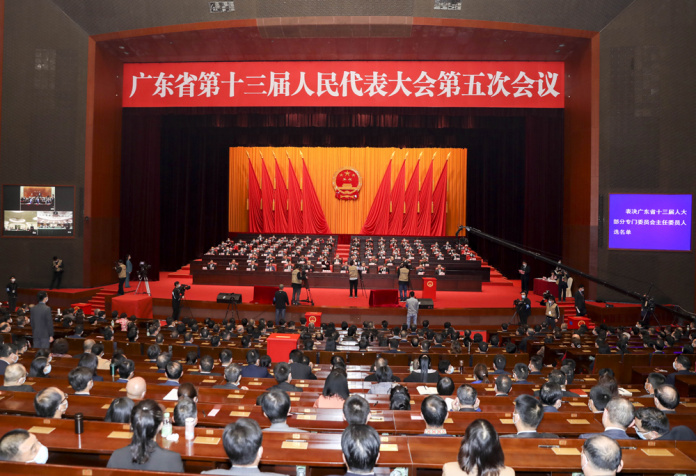 On January 20, the Guangdong province’s 13th People’s Congress was held in the city of Guangzhou where its acting provincial governor Wang Weizhong – who was elected governor during this session – delivered an important report with policy implications for Hong Kong and Macau.

His report affirmed the tremendous progress made by Guangdong in realizing the 14thfive-year plan. Guangdong’s GDP increased by 8 percent from 2020 to 2021, while the city of Dongguan became one of the fastest growing cities in the province. Budgetarily speaking, the local government’s revenues increased by 9 percent, whereas the amount of province’s imports and exports jumped by 16.7 percent. The public consumption on social and retail products rose by 9.9 percent. The value-added amount of all financial and monetary enterprises in the province was over 1 trillion yuan, while foreign investment in the province amounted to 184 billion yuan. The province also invested 1 trillion yuan in major infrastructure projects. About 170,000 5G stations were established in the province, including 46,700 new stations. The number of high-tech enterprises amounted to 60,000. Statistically, Guangdong showed immense and impressive progress in economic development amid the continuation of Covid-19 and its variants.

The target of Guangdong’s GDP growth in 2021 is expected to increase 5 percent, fixed asset investment 8 percent, social and retail consumption 6.5 percent, the total amount of imports and exports 3 percent, industrial and commercial value-added 5.5 percent, the public revenues of local government 5 percent, the residents’ consumption expenditure 3 percent, and the new employment in cities and towns is expected to rise by 1.1 million. All these targets are quite ambitious, assuming that Covid-19 will have minimal impact on the provincial growth.

The report gave considerable coverage on the development of the Greater Bay Area (GBA) with tremendous policy implications for Hong Kong and Macau. First, Guangdong is going to deepen the transport engineering work and digital establishment in the GBA. Second, the transport between Guangzhou and Foshan, and between Shenzhen and Huizhou is going to be improved by modern railway. Third, the GBA is going to have modernized towns, villages, and agricultural districts. Fourth, the Shenzhen stock exchange is going to undergo reforms in its market registration system, opening an experimental zone for Guangzhou-Shenzhen technological and monetary reforms. Fifth, the GBA is going to experiment with cross-boundary asset and capital management. Sixth, the Hong Kong and Macau insurance service centre will be set up, promoting the idea of delivering better insurance services.

The Guangdong report gave considerable coverage in the areas of Hengqin and Qianhai, where Macau and Hong Kong are playing a crucial role in achieving mutual benefits in the process of economic integration. First, Hengqin and Macau Cooperation Zone will witness new regulations to relax market entry and provide special preferential treatment, including the classification of new industries and the tax exemptions for enterprises and individual income. The implication here for Macau is that more Macau enterprises and individuals will be able to benefit from the new law and regulations from the Macau-Hengqin Cooperation Zone so that Macau will be able to launch its suitable economic diversification in some strategic areas, such as the establishment of a bond centre and the development of a Chinese medicine hub.

Second, the GBA is going to use high-speed and modern railway to converge with the Macau Light Rail, benefiting the Macau residents and stimulating the Macau youth to develop their business and careers in the GBA. The implications for Macau are twofold: the Macau Light Rail will need to be renewed in its routes to converge with the mainland railway lines. Moreover, the young people of Macau will need to develop their knowledge and expertise so that they are going to be more familiar with the GBA environment for their career and business development. As such, the government of Macau may have to establish a task force to engage the business sector, to embrace youth groups, to discuss with local tertiary institutions on how to equip the youth with better knowledge of the GBA, and to ponder how to provide incentives for the Macau youth to develop their new business and find employment there. A more proactive approach adopted by the Macau government, the business sector, and the local tertiary institutions will be necessary.

Third, the report mentions the Qianhai-Hong Kong Cooperation Zone will develop its blueprint for land and space usage, exploring a new management system. The implication for Hong Kong is that the Hong Kong government, as with its Macau counterpart, should ideally establish a task force composed of the local business enterprises, the youth groups, and local private and public universities to assess how the Qianhai region can and will be utilized strategically to benefit the co-development of the Northern Metropolis. Better urban planning, strategic developmental blueprint and focused sectoral expansion will achieve a win-win situation for both Qianhai and the Northern Metropolis.

Fourth, the Guangdong report points to the establishment of an international monetary and financial centre in Qianhai, together with a new convention and exhibition ocean centre, and a hub of attracting international talents. It is hoped that an international legal service centre and a centre for the resolution of international commercial disputes will be established. The implication for Hong Kong is that the legal authorities of the Hong Kong government may have to work with the local legal sector to see how Hong Kong’s strengths in the application of common law and international arbitration would benefit the Qianhai’s legal development. Moreover, if Qianhai is going to be another major city developing rapidly with the assistance from Hong Kong, then the infrastructure projects of the Northern Metropolis will perhaps have to consult and work with the Qianhai authorities so that the transport network in the Qianhai-Hong Kong Cooperation Zone will be interconnected and easily attract the movement of talents. Relatedly, more Hong Kong’s private and public universities may consider branch campuses in Qianhai with the necessary supportive investment and mainland’s preferential treatment, especially if the cooperation zone is keen to really attract international talents to work and reside there.

The high-tech innovative development of the Guangdong report is very ambitious, including the acceleration of the high-tech centres in Hetao, Hengqin, Guangzhou and Nansha. These places will try to acquire national experimental projects, including the laboratories for biological safety and the cooperation with Hong Kong and Macau to build up experimental laboratories. Applied research is going to be deepened in the Guangdong province, together with the implementation of the accelerated reforms undertaken in Guangdong’s higher education institutions. Guangdong is going to promote higher education institutions in the province to cooperate with the universities in Hong Kong and Macau so that a process of cultivating more talents and researchers will be facilitated. The implication for Hong Kong and Macau’s higher educations sector is obvious: all the public and private universities in the two special administrative regions should ideally invest more in their research, teaching and learning activities so that more collaborative projects with the mainland counterparts will be built up. The role of the governments of Guangdong Hong Kong and Macau will be expected to be a kind of middlemen, linking up at least some or all of these higher education institutions in the form of an alliance so that a win-win situation will take place.