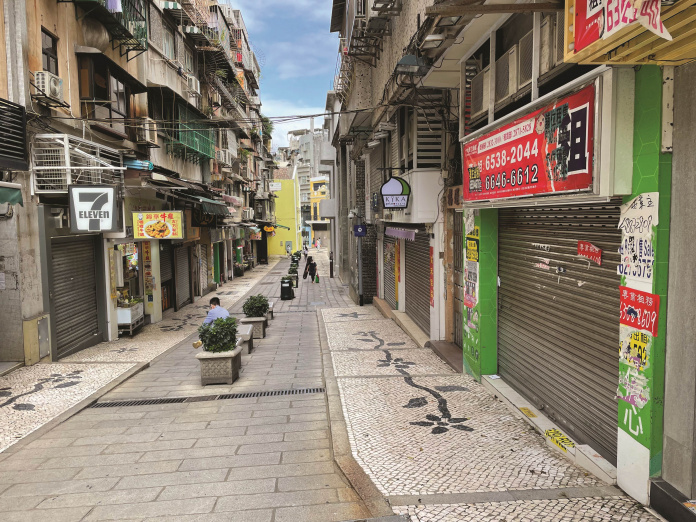 New year; old problem. As the pandemic rolls on, so many calls for economic diversification in Macau as a survival strategy have been heard, loud and long, that, as the law of diminishing returns tells us, their effects recede. Macau still looks to tourism and gaming as the path to economic salvation, with a tiny sideways nod to a bit of Traditional Chinese Medicine, a few sports here and there, whispers of financial services developments wafting in on a gentle breeze of fairyland optimism, and a rather poor joke about offering health tourism.

At the same time, life continues to be difficult for many people in Macau. Between the start of the pandemic (first quarter of 2020) and the end of the third quarter of 2021, as prices rose, the median income of 48 per cent of full-time employees declined; it flat-lined for 36 per cent and increased for only 12 per cent (e.g. professionals). The already low-paid suffer the most. Incomes for many in Macau have worsened; survival and economic recovery are uppermost. Change must happen.

The pandemic should have been a wake-up call for massive investment in diversifying Macau’s economy, but what did we get? More of the same: the mantra of tourism and gaming. Macau’s economy appears to operate on the basis of ‘if it ain’t broke, don’t fix it’, i.e. just carry on buttressing up an existing economic system. But the system is broken; it’s not working, it hasn’t been fixed, and it seems incapable of handling change.

What else must happen before the Macau economy takes seriously the fact that the pandemic marks a tipping point, a bifurcation moment in Macau’s development, a need to create new opportunities in a new, unpredicted and unpredictable, risk-infused, unstable, non-linear world emerging out of the old, and different from it? To handle this, we must think afresh and differently. Closeted Macau is no longer a glorified confectionary shop. We cannot use tools from the old system to address the new system. We cannot solve a problem by using the same frame of reference as that which created it, i.e. expecting the new system to work in terms of criteria from yesterday. We must look at the present and the future through the prisms of uncertainty, instability, non-linearity, self-organized emergent order in an open system rather than top-down, imposed control in a closed system.

A major lesson for Macau’s economy comes from complexity science: to survive in this new world and to handle emergent systems, phase transitions and tipping points, we need an explosion of creativity. Where is this happening amongst the business moguls of Macau and the strategic development plans for Macau’s economy? Where is the creativity to produce new developments to rescue Macau from its over-reliance on a jazzed-up version of ‘more of the same’? Where is the streamlined, minimum bureaucracy in Macau to support innovation and diversity? Where and what are new ways of looking at Macau’s economic development? Who and where are the creative thinkers and risk-takers in developing Macau’s economic substructure and redeeming it from the iron cage of bureaucracy and unadventurous protectionism? Where is Macau celebrating difference rather than conformity, questioning rather than compliance, ‘freedom from’ and ‘freedom for’?

‘Well’, we hear, ‘Macau has a policy and a committee to attract talents to Macau’ to create a new dawn. When has that approach ever worked? What hope is there to attract talents to Macau if there is so little decent work for them and if contracts last for only a couple of years? Why should they give up a decent lifestyle to come to a grubby, environmentally challenged, poky little city? Why enter a cul-de-sac, dead-end career? Why come to Macau where housing is astronomically expensive and decent schools for families are in short supply, where bureaucracy for incoming workers is so anally retentive and yet can go into prize-worthy peristaltic overdrive in eliminating them when things get tough? Why make life so difficult for talented incomers?

How can Macau possibly attract ‘talents’ to diversify its economy, if travelling to and from Macau risks significant psychological damage from being locked up in solitary confinement in a room with no fresh air for three weeks, no human contact apart from an occasional visit from someone dressed like an astronaut coming to stick something unpleasant up your nose, being treated like a criminal for daring to come from a different country, and unable even to receive food parcels brought by family and friends? Maybe, after all, the talents are reserved for Chinese only.

How is it that other parts of the world have more creative ways of handling the pandemic with regard to their economic systems? Macau can learn from alternatives. In a 2018 study (‘Experimental Evidence for Tipping Points in Social Convention’), Centola and his colleagues demonstrated that even small numbers of like-minded, committed people in minority groups can be a critical mass to trigger and catalyse ‘a cascade of behaviour change’ for an emergent society, including using a new ‘collective dialogue’. More than ever, we need a collective dialogue of like-minded, creative thinkers of new, positive disruptive approaches to economic revival and diversification in Macau. At a time when such thinking is needed in Macau, where are these people? And will they be treated with ‘Macau welcomes you’ or, Cassandra-like, simply be disbelieved?