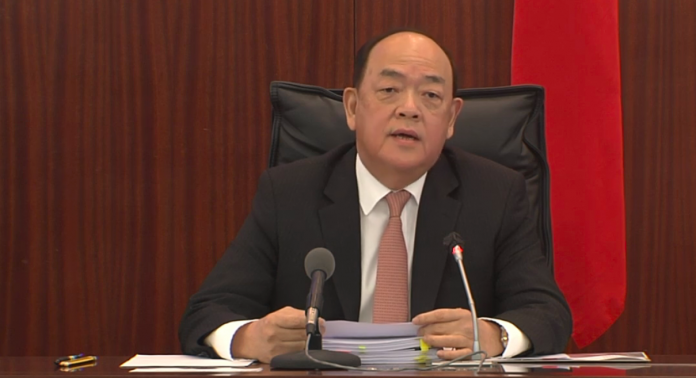 It is about August 28 and the Portuguese version of the responses provided by Chief Executive Ho Iat Seng to about 30 legislators has not yet been published, despite the Chinese version having been made available to the public five days before.

Initially, the CE was scheduled for a Q&A session in the Legislative Assembly (AL) plenary session on August 10, however, the session was cancelled after a Delta variant four-member family cluster was found.

Still, a reply to each of the 30 questions submitted by legislators was duly published on the AL website in Chinese on August 24, despite the office having I imagine more than enough time to have them into both languages.

The replies include responses to questions concerning financial support to the local economy, patriotism definitions, public housing regulations, pandemic prevention and many other issues of public interest.

Although it can’t replace the in-person presence of the CE at the plenary, it is still better than nothing I guess.

One is used to a certain delay between Chinese and Portuguese versions of official announcements so the benefit of the doubt was given. The next day I called the AL office to inquire if it would be published to which I was informed the documents were currently being translated and would be provided shortly.

Still, five days have passed and still nothing. Considering the issue pertains to official replies by the head of government it would be expected the documents would be provided to the public in the SARs official languages in a speedy fashion.

I must stress that both Chinese and Portuguese are official languages in the city before I’m battered by a choir of comments telling me what should I expect being in a special administrative region of the People’s Republic of China.

In recent years it is noticeable how certain official government or court announcements and decisions are published in their Portuguese version with a considerable delay or even not at all.

Such decisions are of extreme importance to the local Portuguese language media and community and more effort should be made to assure they have access to it as enshrined in the Macau SAR Basic Law and as fast as possible.

January 19, 2022
Irish police on Tuesday said they had arrested a man suspected of the murder of...