On July 23rd, Washington decided to order the closure of the PRC Consulate in Houston on the grounds that, according to US Secretary of State Mike Pompeo, China “stole” the American intellectual property. On July 21st, an American federal court had already charged a mainland Chinese researcher, Song Chen, for hiding her identity and affiliation with a PLA hospital when she applied for a visa to conduct research at Stanford University.

Immediately, Sino-American relations were plunged into a nadir since the normalization of their relations in 1972, when the late President Richard Nixon made a landmark visit to Beijing.

On July 24th, the US Secretary of State Mike Pompeo made an important speech on the US policy toward China, asserting that the PRC is a “totalitarian” regime constituting a serious “threat” to the free world. He openly backed up the Chinese political dissidents, Wei Jingsheng and Wang Dan, and the young Hong Kong democrat Nathan Law, whom Pompeo had met in London on July 21st.

Pompeo’s speech was reminiscent of the remarks of the late President Ronald Reagan, who in June 1982 had referred to the former Soviet Union as a “totalitarian” state that threatened the entire world. Pompeo made one step further: he appealed to other like-minded countries to form a “democratic alliance” for the sake of changing the PRC. He said that the new US policy toward China was not “containment.” If so, it may be regarded as alliance encirclement of the PRC’s Marxist-Leninist regime.

At the same time, the PRC-ROC relations have taken a turn for the worse since July 16th, when Kao Ming-tsun, the acting representative of the Taipei Economic and Cultural Office (TECO) in Hong Kong, left the Hong Kong Special Administrative Region (HKSAR) for refusing to sign an affidavit that asked the office to support the “one China” policy. Three other Taipei officials who also refused to sign the document returned to Taiwan. Only eleven officials are now left to work in the TECO. Clearly, Beijing has tightened its policy toward Taipei after the enactment of the HKSAR national security law.

In retaliation, the ROC government in Taipei has reportedly decided not to renew the visas to the Hong Kong officials who station in Taipei. The implication is that Hong Kong officials who stay working in Taipei would likely return to Hong Kong after the expiry of their visas. The Taiwan government would likely review the Laws and Regulations Regarding Hong Kong and Macau Affairs, which deals with the trade, cultural and economic relations between the three places.

Amid the increasingly tense relations between Beijing, Taipei and Washington was the possibility of military accidents or skirmishes across the Taiwan Strait.

On the night of 23rdJuly at around 7:30 pm, and on the morning of 24that 1 am, some PLA airplanes went into Taiwan’s air defence identification zone, according to Taiwan news reports. Taiwan’s F-16 fighters ascended immediately to prepare intercepting the intruders. According to the twitter of the Peking University’s South China Sea Strategic Situation Probing Initiative and the Taiwan news reports, the PLA airplanes pursued several US aircrafts, including the RC-135 reconnaissance aircraft, P-8A Poseidon anti-submarine aircraft, and KC-135 Stratotanker that had recently gone very near the coastal regions of China.

On the night of July 23rd, the PLA air force, according to the Probing Initiative’s twitter, said to the US aircrafts: “This is China Naval Air Force on guard, you are approaching Chinese air domain, change your course immediately or you will be intercepted.” Taiwan sources said that the US airplanes were trying to detect the PLA movements along the coastal regions of South China, especially the areas around Dongsha (Pratas) Islands, which according to news report would perhaps become a target of the PLA occupation during the forthcoming PLA exercises near Pratas Islands in August.

Some Taiwan military analysts interpreted the moves of PLA planes to approach Taiwan on the night of 23rdwere calculated to test the responses of the Taiwan military and to gather more intelligence on Taiwan’s military installations. One Taiwan military expert advocated that the US should deploy its naval force to conduct joint exercises with Taiwan near the Pratas Islands – a suggestion that, if implemented, would likely be interpreted as provocative by the PLA.

In the recent years and months, the PLA and US navies and air forces have both remained very active in the South Seas and the Taiwan Strait. The Dongsha (Pratas) Islands are regarded as a strategic location with military significance to the PLA naval force, whose aircraft carrier Liaoning in April 2020 went through the Bashi channel to conduct military exercises in the South Seas. In April, the Japanese Defense Ministry and media spotted Liaoning aircraft carrier crossing the Miyako Strait with two Type 052D guided missile destroyers, two Type 054A guided missile frigates, and one Type 901 auxiliary supply ship.

At a time when the militaries in the PRC, ROC and US have been flexing their muscles, the likelihood of having military accidents and/or skirmishes cannot be excluded. Jin Canrong, a professor of international relations at Remin University, told the Hong Kong Cable TV news on July 25ththat such military accidents between the PRC and the US would become possible amid the increasingly tense Sino-American relations.

Whether military accidents or skirmishes would suddenly occur depends on several factors.

First, the rhetoric between the leaders and diplomats in the PRC and US may have to be toned down if both countries want to repair their deeply damaged relations, which started from the trade war and their battle over Huawei.

Second, there is no military liaison mechanism between the PRC and the ROC. As such, the recent military encounters on the skies relied much on the self-restraints from both sides.

Third, the Taiwan leaders may have to tone down their anti-PRC rhetoric and activities. President Tsai Ing-wen’s Democratic Progressive Party (DPP) has proposed some measures that may provoke the PRC further, including the possibility of changing the name of China Airlines to Taiwan Airlines, emphasizing Taiwan on the cover of the ROC passports, and implementing constitutional reforms to allow all those who reach 18 years old to become voters. While the constitutional reform of lowering the voting age will likely favor and buttress the DPP’s power base, the emphasis on Taiwan in the airline name and passport cover propels the ROC along the path of de-mainlandization. De-mainlandization would likely provoke the PRC hardliners to argue for a swift military move against Taiwan.

Fourth, it remains to be seen whether the hawks dominate the military leadership of PRC, ROC and US. President Xi Jinping has not made any additional remarks on Taiwan in public since his major speech on Taiwan on January 1, 2019.

A very few hardliners could be occasionally seen in the mainland social media, advocating that it would be the ripe time for the PRC to “take over” the ROC. Perhaps fortunately, some softline civilian leaders can still be seen in both the mainland and Taiwan, advocating soft measures, such as the increased interactions between the cities of Shanghai and Taipei, to improve bilateral relations. The Taipei mayor, Ke Wen-je, delivered a speech at the Shanghai-Taipei Forum on July 22nd, saying that “one family harmony is better than one family hostility.”

Fifth, although public opinion is usually ignored in the making of military policy, most citizens of the PRC and ROC would not like to witness any military accidents or skirmishes. Most mainlanders are eager to see a return to normalcy amid the ongoing Covid-19 and flooding in many parts of China. On the other hand, a survey conducted by ETtoday in Taiwan has shown that, if a war breaks out between the PRC and ROC, 40.9 percent of the Taiwan respondents would be willing to join the battle, while 49.1 percent expressed their reluctance to do so. Most Taiwan people also feel that compulsory military conscription should be enforced to protect the ROC. While 75.2 percent of the respondents felt that Taiwan should have compulsory military conscription, 17.9 percent did not agree with this idea, and 6.9 percent had no opinion.

In short, amid the increasingly tense relations between the PRC, ROC and US, the possibility of military accidents or skirmishes between Beijing and Taipei on the one hand, and between Beijing and Washington on the other hand cannot be excluded. It is hoped that their leaders and diplomats can really tone down their rhetoric, that a trust-building liaison mechanism may eventually be established between the PRC and ROC, that the Taiwan DPP may soften some of its de-mainlandization initiatives, that the military leaders remain to be dominated by softliners rather than hardliners, and that the mass opinion of maintaining the status quo can be taken into account. If not, the looming new Cold War between the PRC and the US does not bode well for Beijing-Taipei-Washington military relations.

Japan’s children of the tsunami shaped by tragedy

March 4, 2021
Swedish police are investigating a possible terror incident after a man stabbed and injured at... 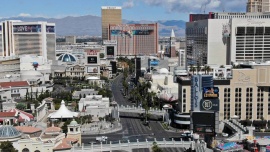 March 4, 2021
A transgender South Korean soldier who was forcibly discharged from the army after gender-reassignment surgery...
Load more