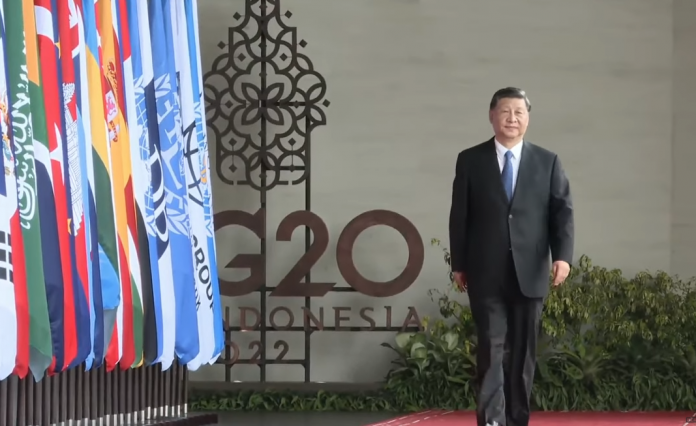 The recent visits of the Chinese President Xi Jinping to attend the G20 and APEC meetings in Indonesia and Thailand, respectively, have shown that he has significantly revised and redeveloped the late Chinese leader Mao Zedong’s three worlds theory in a geopolitical and geo-economical  way.

In February 1974, Mao Zedong said that the US and the former Soviet Union belonged to the first world, that the second world embraced countries such as Japan, European states and Canada, and that the third world included the populous states in Asia and Africa. The main objective of Mao’s theory was to conduct united front work to win the hearts and minds of the developing or Third World states. Similarly, China must win over the countries in the second world, trying to isolate the two superpowers, namely the US and the former Soviet Union. In April 1974, the former Chinese leader Deng Xiaoping remarked that China belonged to the third world, and that China supported all the oppressed peoples and nations-states in their struggles against imperialism and superpowers. Anti-hegemonism was a consistent theme adopted by the Chinese leaders from the 1970s to the 1990s.

With the rapid rise of China since the early 2000s, and particularly since Xi Jinping’s ascendancy to political power since late 2012, the Chinese leadership has been displaying significant continuities and changes in Mao Zedong’s three worlds theory.

In terms of continuity, firstly, anti-hegemonism remains a continuity of Xi Jinping’s foreign policy. China has been rising economically, militarily and technologically and adopting a “great power diplomacy” that emphasizes multilateralism and Beijing’s active participation in international organizations. Unlike Mao’s China which was relatively isolated and economically backward in the early half of 1970s, and unlike Deng Xiaoping’s China which underwent the early phase of modernization throughout the 1980s, China’s recent rise has meant that it has to adopt a far more inclusive foreign policy than ever before.

Most importantly, with the collapse of the former Soviet Union and the decline of Russia’s power status, especially amid the ongoing Russo-Ukrainian war, China is grasping the excellent opportunity to become the third “superpower” alongside with the US and Russia in the first world. China has also been adopting a relatively neutral attitude toward the Russo-Ukrainian conflicts. Beijing has been showing the element of non-interventionism amid the war between Russia and Ukraine, which has become a de facto proxy of the US and its allies in the war against Putin’s Russia. Amid the continuity of anti-hegemonism in Mao’s three worlds theory, Xi Jinping’s China has added the new elements of multilateralism, active participation in international organizations, and relative neutrality within the Russo-Ukrainian war.

The second continuity of Mao’s three worlds theory and Xi Jinping’s foreign policy is the ingredient of extensive united front work to win the hearts and minds of countries in both the second and third worlds. China’s Belt and Road Initiative, which was officially announced in March 2015, has the objectives of achieving its geoeconomic and geopolitical outreach to the three worlds. Geoeconomically, China has been utilizing its state-owned enterprises to invest in countries in the third world, helping them to modernize, building up infrastructure projects, and helping the developing states to achieve sustainable development without imposing the so-called “China model of development” onto them. The ultimate objective is to win their hearts and minds, helping China to achieve the foreign policy objectives of presenting a peaceful image, and portraying the perception of a socialist power that assists all other developing states in the processes of economic modernization and sustainable development.

Similarly, China under Xi Jinping has been reaching out to the more advanced countries in the second world, such as Canada, European states and Japan, to win more friends, to project the image of a peaceful China, and to secure their support of China’s emphasis on the one-China principle in dealing with Taiwan. At a time when Taiwan’s soft power has been rapidly expanding since the 1990s, China under Xi Jinping is eager to achieve the long-term objective of reunifying the island, as the recent 20th Party Congress has unveiled.

The important change of Xi Jinping’s foreign policy compared with Mao’s three worlds practice is that Xi has abandoned Mao’s revolutionary diplomacy in the 1950s and 1960s when China supported many communist movements in various parts of the world.

Nevertheless, Xi Jinping’s China has built up a strong and rising military which is prepared to defend its sovereignty, territorial integrity and national developmental interests, as emphasized in the recent 20th Party Congress.

Another prominent change in Xi Jinping’s version of the three worlds theory is that China has been adopting a highly assertive foreign policy. Chinese diplomats have not been shying away from refuting the arguments of foreign officials, journalists and media professionals.

The most recent visits of President Xi, shortly after the 20th Party Congress that consolidated his political power, to G20 and APEC have vividly demonstrated such assertive presidential diplomacy. On November 14, when Xi met US President Joe Biden, he told the latter that their meeting was “under the world spotlight,” signaling the rise of China as a “great power” in the new world of international politics. The three-hour meeting was constructive in Sino-US relations, for both sides agreed to conduct continuous dialogue, discuss economic and trade issues, promote climate change policy and cooperation in public health and good safety, set up work teams to solve problems, and enhance diplomatic interactions between the two countries.

The crux of the problem is whether the Democratic Party would continue to govern the US after the presidential election in 2024, and whether the currently fragile and precarious stability between the two countries will be maintained in the long run. The Nancy Pelosi visit to Taipei in early August plunged the Sino-US relations into a serious ordeal. Fortunately, all sides – China, the US and Taiwan – adopted a restraint attitude to cope with the unprecedented crisis.

Xi Jinping’s meeting with the French President Emmanuel Macron on November 15 illustrated how China deals with the second world. Xi told Macron to maintain mutual respect of the core interests of both sides, to expand bilateral trade, and he hoped that the EU should adopt an independent and active approach in dealing with China.

Xi’s approach of tackling the countries in the second world also depends on how individual country deals with China. His criticism of Canadian Prime Minister Justine Trudeau of leaking out what they had discussed in negotiations to the press revealed that the Chinese President has a vastly different political culture compared with Trudeau. Trudeau, who reportedly raised the issue of Chinese espionage in Canada during the discussions with Xi, defended by saying that Canada’s political culture emphasized open dialogue and frankness. Nevertheless, Xi responded by saying that both countries should create the necessary conditions before they would move forward – a clear indication that Trudeau’s liberalism was at odds with Xi’s cautious paternalism.

While the Sino-Canadian relations has remained sour since the Sabrina Meng incident and after the controversies over Michael Kovrig and Michael Spavor from December 2018 to September 2021, Sino-Japanese relations have been much better, comparatively speaking. Xi Jinping told Japanese Prime Minister Fumio Kishida during the APEC meeting on November 17 that China does not accept anyone to intervene in its internal affairs – an implication pointing to the need for Japan to handle the Taiwan question carefully. Kishida raised the issues of Senkaku (Diaoyu) Islands and the Taiwan Strait’s security to the Chinese side. Although both Xi and Kishida shook their hands warmly and smiled happily in public, the warm Sino-Japanese relations have their underlying limitations: the territorial dispute over Diaoyu (Senkaku) Island and the sensitivity to the Taiwan question remain the hidden tides that would test their long-term relations.

Xi Jinping did not lose the chance of conducting united front work on the second world on November 15, when he remarked that countries should replace divisions with unity, that they should seek to make progress and achieve well-being for the world, that each country has its right to be better, that modernization is by no means a monopoly possessed by any country, that food security and energy supplies should not be politicized and weaponized, and that the modernizing China is providing lots of opportunities for countries in the world. Xi also stated that he hoped for the countries in the African Union to join G20 – a remark that can be interpreted as a united front effort at winning the hearts and minds of countries in the third world.

Xi’s speech at G20 on November 15 appealed to the third world in the following way: these developing states should recover their economies and China is keen to assist them; they would also need to upgrade their anti-Covid tools, medication and diagnosis; they need to deal with financial and monetary risks with the help from the International Monetary Fund; they need to be helped in the process of tackling their debt; China would implement a digitalized plan to create a digital economy beneficial to the developing states; and countries in G20 should help developing states in the aspects of food production, energy supplies, economic production, capital accumulation and technology transfer. Here, what Xi said echoed China’s Belt and Road Initiative which aimed at providing loans to developing states, mobilizing state-owned enterprises to contribute to the infrastructure developmental projects of aid recipients, and helping many countries in the third world to overcome underdevelopment. The objective of China is inherently socialist: the creation of a common destiny for the humankind so that all countries would be narrowing their income and economic gap and that world peace would be ensured.

In conclusion, from the visits of Chinese President Xi Jinping to attend the G20 and APEC meetings, and from his speeches and remarks delivered in the two important international organizations, he has already significantly revised, revived, and updated Mao Zedong’s three worlds theory. In terms of continuities, China remains opposed to hegemonism and persists in the adoption of united front work, while seeing the entire world in three categories. China’s rise has pointed to its need to adopt great power diplomacy to deal with the US and Russia. The changes from Mao’s three worlds theory are very prominent and significant. China under Xi Jinping is now fully committed to maintaining multilateralism, achieving world peace, adopting relative neutrality in the Russo-Ukrainian conflicts, shaping a new socialist vision of achieving common prosperity not only in Asia but also the world, and assisting countries in the third world to overcome underdevelopment and to develop socio-economic modernization so that the common destiny for the humankind would be created. If socialist revolution was a main theme in Mao’s foreign policy during the 1950s and 1960s, China under Xi Jinping is adopting a new ideology of permanent socialist peace and persistent socialist outreach. It remains to be seen how the twin objectives of creating new socialist sustainability and permanent peace in the world can and will be achieved.