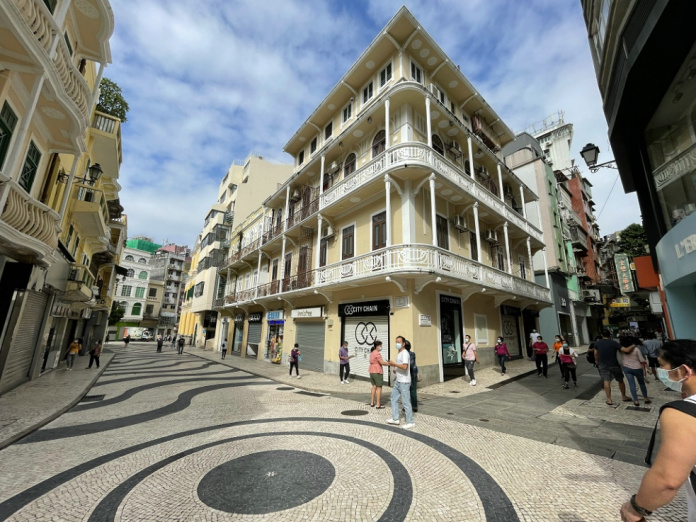 Following the Covid-19 outbreak more than two years ago, empty street shops have been commonplace in tourist hotspots like the districts of Senado Square and Ruins of St. Paul’s. Besides travel restrictions and the limited influx of visitors, one of the other reasons for these vacated stores is that landlords have been unwilling to lower the rents to the affordable level of merchants amid this gloomy economic climate — but this seems to have changed in recent times.

A visit by Macau Business on a Saturday afternoon in March in the city’s downtown — areas of Senado Square and Ruins of St. Paul’s — found that among 149 street-level shops polled, 55 were closed, or nearly 37 per cent of the total. Among these, 13 out of 20 shops in Travessa da Sé were closed, while 15 out of 47 shops in Calçada de São Paulo that is known as the “food souvenir street” were unavailable.

Lily Hong, sales director of Midland Realty (Macau) Ltd, is not surprised with this bleak scene in the once populated tourist sites given the fluctuations of the pandemic situation. For instance, the travel arrangements for people to enter Macau through Zhuhai, Guangdong province — the main gateway for Mainland Chinese travellers to the city — had once been tightened again in March, requiring a negative nucleic acid test result issued within the past 24 hours against the 48-hour and seven-day requirements in the previous months, due to the rising number of Covid-19 cases in some mainland cities and provinces.

But Ms. Hong points out the landlords of retail properties in tourist sites have been more adaptive and flexible in terms of rents in the past few months. “At the start of the Covid-19 outbreak, the landlords were not willing to give any concessions but more have been willing to do so in recent times,” she says. “They probably think it’s better to have some income than to leave their properties unoccupied, as there are no signs when the pandemic will end.”

“The fall in rents, for instance, in the areas of Ruins of St. Paul’s and Senado Square is drastic, with the current level only representing about one-fourth or one-third of the price in the pre-pandemic era,” she says. The rent for shops in Calçada de São Paulo now only fetches HK$130-150 (US$16.6-19.2) a square foot, compared with about HK$500-600 a square foot in the past, she illustrates.

The city received 7.7 million travellers last year, up by 30.7 per cent from 2020 but still only translating to 20 per cent of the pre-pandemic volume, according to the Statistics and Census Service. The number of visitation arrivals to Macau reached over 655,500 in February, up by 53.5 per cent from the same period a year ago but down by 5.6 per cent from the previous month over the new wave of the Covid-19 outbreak in the nearby regions, latest government data show. Macau now only remains largely quarantine-free travel arrangements with the mainland, and there have been talks for similar arrangements between the two special administrative regions but no results have materialised.

Lei Cheok Kuan, chairperson of the Industry and Commerce Federation of Macau Central and Southern District, also observes the trend of declining rents in tourist sites in recent times. “Some landlords have offered cut-throat rents to attract merchants to take up their properties,” he illustrates. “Some shops near Ruins of St. Paul’s and in the vicinity fetched as much as HK$300,000-HK$400,000 a month in the past, but any interested parties now can occupy the space by paying just less than HK$100,000 a month.”

The chairperson of the association that covers merchants in the city’s downtown says a few new food souvenir stores have opened in the downtown in recent weeks due to the lower rental level. “Landlords should understand the predicament of merchants in this business climate and lower the rents as much as possible, so that merchants could continue to operate and improve the business environment of the city,” he adds.

“In the tourist areas, rentals of some retail properties have dropped by 70 per cent… [and] some retailers have taken up new space for expansion taking advantage of the significant fall in rentals,” Oliver Tong, general manager of property consultancy Jones Lang LaSalle Macau (JLL Macau), agrees.

“[But] some landlords who are relying on rental income for mortgage repayments have opted to leave their properties vacant when rentals have dropped to a very low level… because if the rental income of a property is too low, it may lead to a downward adjustment to the valuation of the property,” he adds.

There is also a similar scenario of slumping shop rents in the areas close to casinos like the NAPE district, where a number of satellite gaming venues are clustered, over the pandemic situation and the turmoil in the gaming sector, say property industry observers. The gaming industry, particularly the junket segment, has been hard-hit since the high-profile arrests of two junket bosses Alvin Chau Cheok Wa and Levo Chan Weng Lin respectively in last November and January.

But the free fall in rents in the NAPE area could be exacerbated given the proposal in the revised gaming law bill that is undergoing the review of the Legislative Assembly. The amendments suggest any casinos operating in the city must be established in the assets “owned” by gaming concessionaires, and a grace period of three years will be given to resolve the situation if concessionaires have established casinos in the assets owned by other parties. This is regarded as dealing a blow to satellite gaming venues — that are managed by independent parties under the licences of gaming concessionaires through a service agreement — and any potential closure of these venues could affect the businesses in the surrounding regions and thus the rental value of the retail properties.

Property agency Centaline Macau noted in a statement that the rental level in tourist areas and casino districts like NAPE fell 30-50 per cent in the past 12 months following a huge decline in 2020. But the annual volume of shop rental deals across the market in the past two years has increased nearly 30 per cent from the pre-pandemic era because merchants took advantage of low rents, the agency added.

Centaline Macau also said shop rents in the residential areas like Taipa and Areia Preta have been stable — with only a decline of about 5-10 per cent in some shops — since the Covid-19 outbreak, as the performance of merchants in these districts has largely remained unscathed from this unprecedented health crisis. Compared with the plunge in the rental level of street-level shops, the rental value of retail properties in top-tier segments like in shopping centres and integrated resorts will likely just fall for another 5-10 per cent, following a slump of 8.9 per cent in 2021, JLL Macau forecasts.

Despite the current economic downturn, a new retail-cum-hotel project is indeed going to open this December — Yoho Treasure Island Resorts World Hotel, Macau — on the waterfront of Nam Van Lake in the city’s downtown. The developer of the MOP4.7-billion project announced in March that six international brands have already pledged to establish presence in its five-storey shopping mall, including renowned French department store chain Galeries Lafayette, sports brand Under Armour and global hamburger chain Five Guys.

Local businesswoman Ao Mio Leong is behind this project, who is linked to real estate development company Yoho Group that is developing high-end residential developments YOHO: Cotai Star Prestige and YOHO: Cotai Marina Bay, opposite integrated resort Galaxy Macau. The developer has recently unveiled a rental subsidy scheme for 24 street-level shops in YOHO: Cotai Marina Bay, which has been completed and residents are expected to start moving in this year. The scheme, providing rental subsidies for two years, is to attract merchants to open business in the project as soon as possible through incentives.

“Given the uncertainties clouding the pandemic situation and the local economic climate, the development and expansion plan of merchants and investors have slowed down, so there are challenges for street-level shops to find tenants,” Mr. Tong, the JLL Macau executive, says. Merchants of branded products and services also prefer to occupy spaces in shopping malls than street-level shops, he adds.

Overall, the performance of the retail properties overall in the near future, ultimately, depends on when the travel restrictions between Macau and Hong Kong, the mainland and even the rest of the world will be gradually lifted, the observers add.