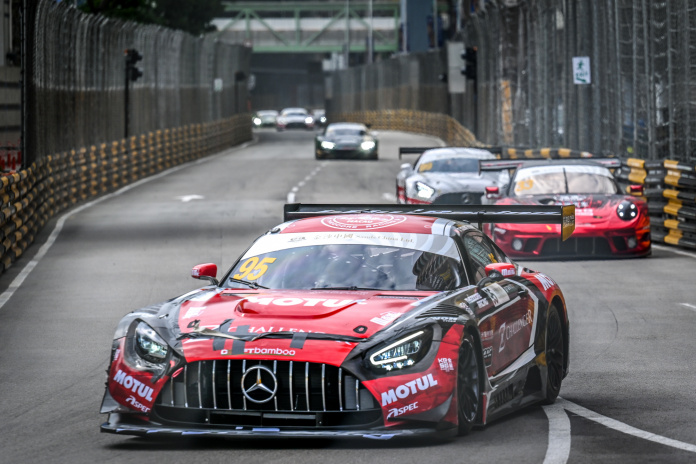 An ecstatic Darryl O’Young attributed his victory in the Sands China Macau GT Cup to his mechanics for repairing his Mercedes AMG on time to take part in the final race, while dismissing accusations by fellow drivers his car endangered the race by spilling out oil.

The experienced Canadian-born driver had a dramatic crash in Race 1 on Saturday, with a support team racing against time to make sure the Craft Bamboo Racing driver could join the grid in the GT Cup at 1:00pm of today.

“When we first looked at it we thought for sure we’re finished, we can’t continue the race. We knew the car was heavily damaged. However [the support team] didn’t want to give up so we made a commitment and they worked all through the night, welding the chassis and all sorts of work. Even when I got the car this morning, just 10 seconds before the grid, it didn’t look very good, to be honest,” an elated O’Young told the media after the race.

“It’s just a testament to the guys, this race is for them. Easily anybody could’ve just given up and said they couldn’t fix this. It’s just unbelievable that we managed to do it. I never teared up during a race but today during the in-lap I had some tears”

O’Young expressed that even during the race he struggled a lot with his repaired Mercedes AMG, which affected his pace while attempting to defend his first place from rivals Leo Ye (Porsche) and Luo Kuai Luo (Mercedes)

“The chassis was physically bent, about 5 cm in a different height so it was really difficult to drive and it was struggling on the tires. I had a strategy to rest my tires during the hill and not over-push the car, and then when I got to the bottom I would push as hard as and defend my lead.”

Meanwhile, fellow podium members used the final race press conference to bring out some grievances over what they described as oil spilling out of O’Young’s car, with last year’s winner Ye even accusing the Hog Kong driver of jumping a red light in the start.

“I’m not sure I saw Darryl accelerating on the red light. We’ll have a look into that. Also, during the whole race is oil just kept spraying on my screen. I couldn’t see anything towards the end of the race, my tires were full of oil. It’s quite dangerous and I don’t know why they didn’t call him in,” Ye complained.

During the podium ceremony, Ye also chose not to carry out the traditional champagne spray celebration with O’Young, choosing instead to drink it.

Inquired on the matter afterward, O’Young only remarked that he had “absolutely no idea about” the oil spill issue and that he would ask his team about it.