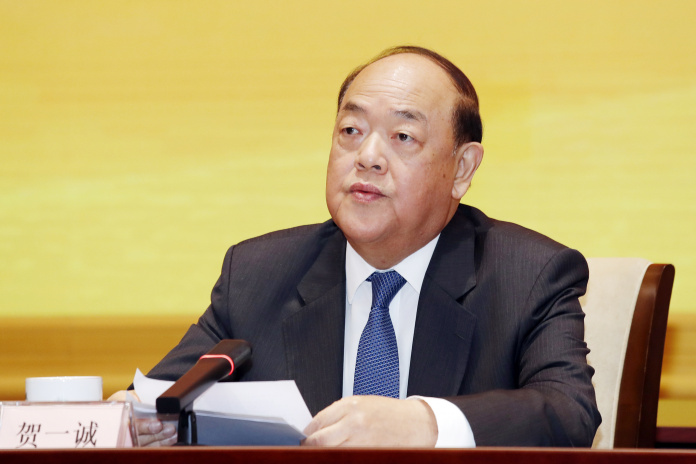 Chief Executive Ho Iat Seng stated today (Thursday) that the latest community outbreak in Macau “is still under control” and the government has the confidence to restore the social order as soon as possible.

In a special press conference held today about the latest pandemic situation in the city, Ho also said the type of Covid-19 variant that is behind the current Macau outbreak is Omicron subvariant BA.5.1, which is now prevalent in the United States and United Kingdom but not in Mainland China.

The number of confirmed Covid-19 cases in Macau has jumped to 110 as of Thursday morning since June 18, with 4,109 people placed in medical observation. The authorities have ordered the suspension of all entertainment, sport and leisure venues, except casinos, as well as the dine-in services of restaurants and drink shops, starting from 5:00 pm today.

Describing this latest outbreak as “more complex and severe” than the previous ones, Ho stated today in the press conference a medical team led by prominent Chinese pulmonologist Zhong Nanshan has helped them in analysing and tackling the current pandemic situation in the city.

“They [the team led by Zhong] believe [the virus] might spread rapidly but the situation is still manageable, and they have faith in us that it will not take a long time for us to keep the situation under control should the public cooperate [with the government measures],” the Chief Executive said.

Asked whether the city will further ramp up measures in the fight against Covid-19, namely, a partial lockdown or citywide lockdown, Ho said this would depend on the results rendered from the second round of testing citywide, which started at 9 am on Thursday and lasts until midnight on Friday.

The Chief Executive also commented the authorities are still tracing the origin of this latest outbreak, but believes “the virus does not come from the mainland”. “There are challenges in tracing the origin [of the outbreak]… and we’re not ruling out any possibilities,” he adds.

Prior to this latest community outbreak in Macau since June 18, the city had only maintained largely quarantine-free travel arrangements with the mainland, while people entering Macau from other places in the world must undergo quarantine at designated hotels.

Enquired today in the press conference about how the virus could spread to Macau, the Chief Executive did not rule out the possibilities of the virus spreading from cold-chain products imported from the western countries to the city, or the personal belongings from those coming back from the west to Macau.

“The Municipal Affairs Bureau has implemented rigorous anti-epidemic measures on the imports of cold-chain products but it is not possible for them to test and sample every product,” Ho said, adding he has already instructed the bureau to review the logistic and disinfection procedures of these imports.

In regards to the city’s “zero-Covid” policy, the Chief Executive stressed the city has to do so in order to lift the border restrictions with the mainland, the city’s largest feeder market for tourism.

Ho also toes the line of the central government, describing the strategy of “co-existence with Covid-19” as “lying flat”. Also known as “tang ping” in Chinese, “lying flat” refers to a life philosophy of the youth on the mainland who adopts a resigned attitude to life, and it has gained popularity among the mainland youth, a phenomenon that has been criticised by state-run media outlets.

“If we don’t want to restore normal travel arrangements with the mainland, we can think about it [lying flat],” Ho said today. “If we do so, we all have to [undergo quarantine of] seven days or 14 days for travelling to the mainland.”

“This will be disastrous to Macau,” he continued. “It’s simple for the government to lie flat. We only need to treat the patients but the problem is can we just do that?”