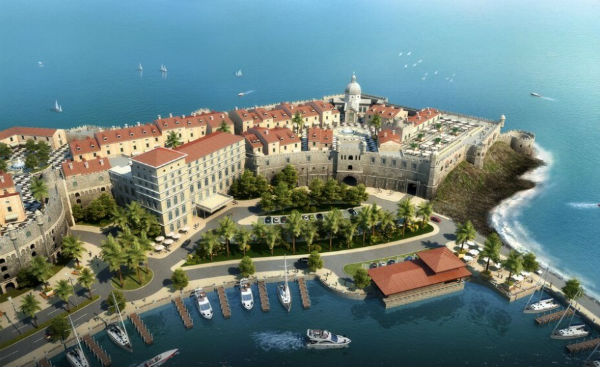 The Cape Verdean government admits that the COVID-19 pandemic should delay the completion of the hotel-casino that the Macau Legend group is building in Praia, but believes that the 250 million euros (MOP2.3 billion/US$294.8 million) investment of is not at stake.

Speaking to Lusa, the Cape Verde Minister of Tourism, Carlos Santos, guaranteed that just like the enterprise that the group founded by businessman David Chow is implementing between the islet of Santa Maria and the coast of Praia, the major investments in the tourist sector in Cape Verde have not been called into question so far, despite the consequences of the outbreak.

“I do not think so. Nor have we seen any signs in this direction [pandemic jeopardizing Macau Legend group investment]. Incidentally, I say that the overwhelming majority of investors who are making investments in Cape Verde, before the pandemic, immediately with the repatriation flights asked the Cape Verdean Government for authorization to send their technicians to Cape Verde to continue the projects,” said Carlos Santos.

The Macau Legend group announced last March that it plans to open the hotel-casino in the city of Praia, Cape Verde at the end of 2021, after having scheduled the completion of the work by the end of this year in 2019.

“There has been no desire to give up. It is very good, it means that businessmen and investors are believing in the country, in the destination of Cape Verde and in the ability to continue to grow, in the business opportunities we have,” insists Carlos Santos, despite the works of the future hotel-casino have been going on for several months with few workers on-site and no visible progress, in addition to the construction of the bridge that connects Praia (Santiago Island) to the islet of Santa Maria, completed several months ago.

“The information is normal. We have had information that they continue with the works, obviously that at this moment, with the pandemic, there was a slowdown [in the works], but we have not had any contrary information, that there is abandonment, and we understand that that work is to continue, because it is a large investment. And it will continue for sure ”, guaranteed the minister.

Even so, a further delay in concluding the contract, which Carlos Santos guarantees is a “structuring project for tourism in Cape Verde”, is not ruled out: “There will probably have to be some delay there, precisely because of the stops that existed. But we are hopeful that with regard to large investments, things will continue ”.

In 2015, David Chow signed an agreement with the Cape Verdean Government for the construction of the project, with the first stone of the project being laid in February 2016. It is the largest tourist development in Cape Verde, with an estimated global investment of 250 million euros – about 15 per cent of Cape Verde’s Gross Domestic Product (GDP) – for the construction of a tourist resort on the Santa Maria islet, which will cover an area of ​​152,700 square meters, inaugurating the gaming industry in the archipelago.

The work involves the construction of a property with a 250-room boutique integrated resort, a large swimming pool and several facilities for restaurants, bars and commercial establishments, as well as a marina.

However, a draft addendum to the agreement between the company and the Cape Verdean Government, of April 2019, states that, “considering that, in view of the evolution of the national environment of the enterprise in the last two years, the promoter suggested, and the Government understood to accept, a proposal to carry out the investment project in phases ”. Thus, in this first phase of the project, which should then be completed within 22 months, 90 million euros will be invested.

David Chow received a 25-year license from the Government of Cape Verde, 15 of which on an exclusive basis on the island of Santiago. This gaming concession cost CV Entertainment Co., a subsidiary of Macau Legend, the equivalent of about 1.2 million euros. The promoter also received a special license to exclusively explore online gambling across the country and the sports betting market for ten years.

Minister Carlos Santos guarantees that in the strategy until 2030 the Government defined the need for “sustainable development of tourism” in Cape Verde, maintaining “anchor products”, such as sun and beach, reinforcing the bet on cruises and nature tourism, but also in the game.

“Gaming is a sector that we want to continue to bet on, respecting all international rules and good practices, because it attracts a type of customer that has a very reasonable purchasing power”, assumed the minister.