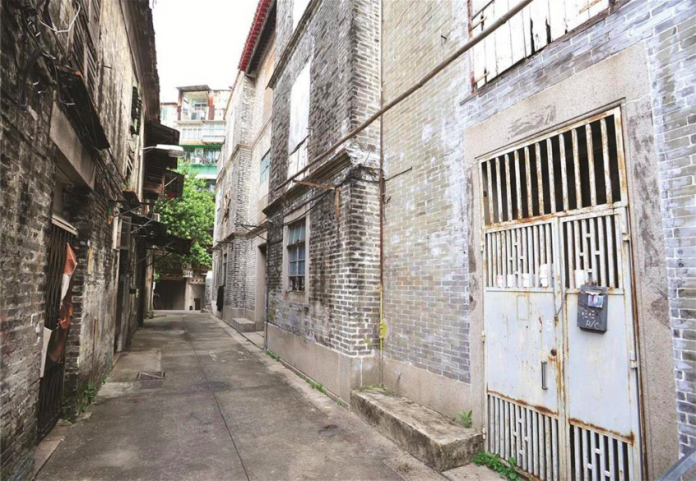 Macau (MNA) – Architect and professor, Francisco Vizeu Pinheiro, told MNA that most of the Chinese vernacular architecture houses at Pátio da Eterna Felicidade are in “need of urgent recovery” and should be restored in a way that preserves their historical significance.

This week Kiang Wu Hospital Charitable Association has officially handed 13 buildings located on Pátio da Eterna Felicidade and Rua da Tercena to the Macau government, with the houses located inside the Historic Center of Macau listed in 2005 as a World Cultural Heritage site.

The buildings were said to have architectural features of Lingnam – the Southern Chinese provinces of Guangdong and Guangxi – and were said to be in ‘good condition’, occupying a total construction area of ​​2,184 square meters.

“These houses of Chinese vernacular architecture are among the few surviving examples of an historical epoch and deserve to be preserved,” Mr. Pinheiro, and Assistant Professor of the Faculty of Creative Industries at University of St. Joseph in Macau told MNA.

An expert in urban rehabilitation projects in the Macau historical center, Mr. Pinheiro stated that these houses are a “testimony” of the local Chinese community during the late 19th century and early decades of the 20th century.

“This is the period when the Chinatown of Macau, known at the time as the bazaar of the Chinese traditional pharmacies or Chinese bazaar, was developed. They were the work place for the vast majority of Macau residents,” the architect told MNA.

The houses at Pátio da Eterna Felicidade have a shophouse architectural typology where the family who works in the store and warehouse also lives on the upper floors.

“This commercial operation model allows the store to be open for a long time, closing only briefly at lunchtime and at night to sleep. The construction is simple, formed by two lateral walls that lean on a foundation of granite,” Mr. Pinheiro described

“These gray brick sidewalls, usually spaced about four meters, support the floors and the structure of the wooden roof. The length of the houses varies between a few meters and thirty, in some areas. Many of these houses form sets of patios, with access to a well for water supply.”

According to Mr. Pinheiro the revitalisation of the houses – which will know be under the Cultural Affairs Bureau (IC) – should avoid a style of preservation sadly very common in Macau, when solely the facade is maintained while “the memory, the rhythm, the traces of the interior” is destroyed, such as what was done to houses converted into the Patane library.

“There are many good examples of revitalization of these shophouses in Singapore, Shuzhou, etc. We have the good example of the recovery of the Lou Kau Mansion (盧 家 大 屋) near the Se Cathedral,” the architect told MNA.

The Lou Kau Mansion in Travessa Da Se is the former residence of the famous businessman Lu Huashao, built around 1889 during the reign of Emperor Guangxu in the Qing Dynasty (1644-1911).

Concerning the previous evaluation of the houses cited by the Kiang Wu Hospital Charitable Association chairman of MOP20 million (US$2.47 million), the architect considered it to be “reasonable” valuation and “somewhat low” when compared to current costs of housing in the city.