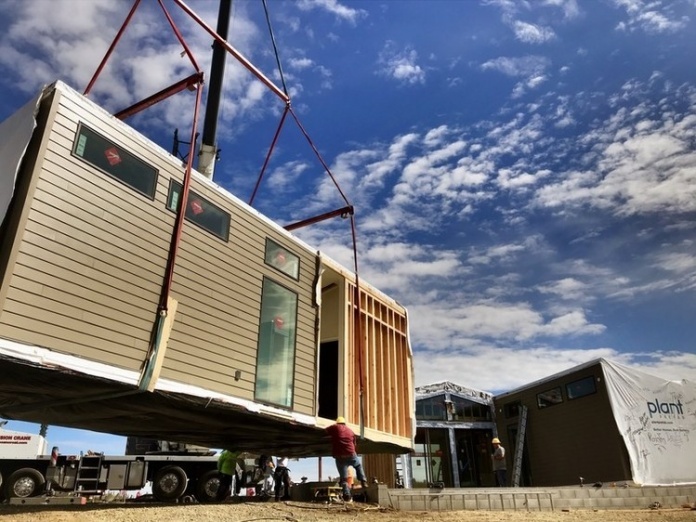 Prefabricated buildings, or prefabs, are buildings with components (walls, roof, and floor) that are manufactured in a factory or manufacturing plant, these components can then be fully or partially assembled in a factory which is then transferred to the construction site.

This method of building construction is considered to be more cost-efficient and have a faster turnaround and reusability, with Ao noting it could help reduce the current need for a large number of mainland construction workers.

“When we want to build a building there’s a lot of reinforcement, fixing, framing and foundation work. It’s very hard work that requires a lot of manpower. Nowadays very few Macau citizens are willing to do this kind of work, so this type of work now requires a lot of on-resident labour, mostly from Mainland China,” Ao told MNA.

As of June of this year, there were a total of 28,135 non-resident construction workers in Macau, almost all from Mainland China.

For Ao, the number of imported labour in Macau “should be controlled by the government” and since this method would see the “reinforcement, fixing and pre-fabricated work already carried out in-factory” with the part then re-assembled in Macau it “could reduce the demand for foreign labour”.

According to Ao, similar pre-fabricated methods have already been used in local projects including the Hyatt Regency, the former Genting hotel project in Nam Vam Lake, and in previous Iao Hon residential building projects.

In a recent statement, the public entity in Macau responsible for urban renewal, Macau Urban Renewal Limited (MUR), indicated that future construction projects in the SAR will head towards pre-fabrication methods.

Such methods will be used to build the Macau New Neighbourhood, the first livelihood project developed for Macau residents in Hengqin, with almost 4,000 residential units.

The project will also include over 200 housing units for professional talents, being the first livelihood project developed for Macau residents that integrates education, health and social services, as part of promoting and implementing the development of the Guangdong-Macau in-depth cooperation zone in Hengqin.

According to Macau Urban Renewal, the project’s pile foundation is expected to be finished within this year, while the construction of the basement, main body, fitted-out residential units, roads, and greening facilities will be gradually carried out, with the whole project is expected to be completed in 2023.

Apart from the Hengqin project, MUR is also responsible for the temporary and home swap housing projects in Areia Preta, with the construction of elderly resident units in the former Pearl Horizon land plot – in charge CCEC Macau – to also use pre-fabricated methods.

The project comprises a 37-storey building with 1800 studio units and a series of social facilities.

Secretary for Transport and Public Works Raimundo Arrais do Rosário also recently indicated that if the use of prefabricated methods in the elderly residential project was successful, this method would likely be used to develop the expected 28,000 public housing units in New Area Zone A.

At the time the Secretary indicate that he hoped local companies could learn how to employ prefabricated construction methods, which he considered to be faster and generating less construction waste, albeit more expensive.

However, according to Ao, this construction method has been already widely used in Mainland China “for 40 to 50 years” and could also be more cost-effective, since the prefabricated elements would just be re-assembled in-situ.

“It would save time, money, materials and would have better quality”

In terms of disadvantages when compared to more traditional construction methods, Ao warned it required “more skilled professionals” for its design.

“For example, the prefabricated beam-to-column connections are cut member by member so the connection has a weak point. Whenever there’s a weak point, we will need to reinforce it, which requires special know-how. Also the external wall, panel-to-panel will have additional joints, which can lead to some rain leakage,” he noted.

Still, the engineer underlined that pre-fabs are already a well-developed technology, so most of these issues could be corrected.

China Construction Engineering (Macau) Company Limited established two training centres for pre-fabricated construction training in cooperation with the Macau New Neighbourhood project in Hengqin, with the company responsible for the project underlining that future construction projects in the SAR will head towards pre-fabrication methods.

Both centres – named the ‘Constructional Practicum Base for University Students in Macau’ and ‘Training Base for Pre-fabricated Construction – will aim to help Macau’s university students and graduates majored in construction to learn about the standard of the construction industry in the Greater Bay Area.

The ‘Practicum Base for Macau’s University Students majored in Construction’ is intended for Macau students in tertiary education to receive quality practicum opportunities, while the “Training Base for Pre-fabricated Construction” will focus on advancing the training cooperation between pre-fabricated construction enterprises and Macau construction industry professionals.

A plaque unveiling ceremony of the two training bases was held at the MNN project in Hengqin on August 19.