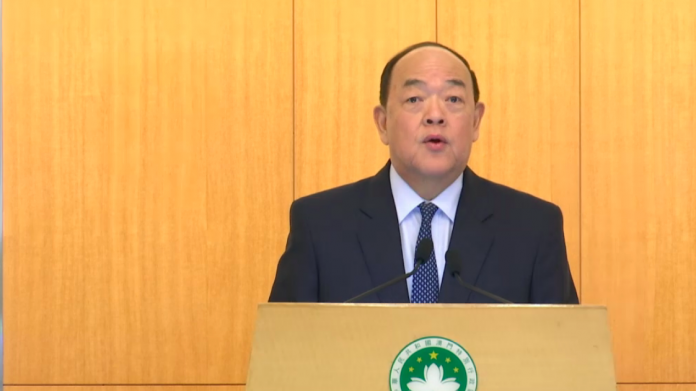 Chief Executive Ho Iat Seng announced today that despite the new pneumonia outbreak no entry limits will be imposed on residents from Wuhan or from any other Chinese region.

“This is impossible. So far the World Health Organisation (WHO) has so far not given indications to impose entry restrictions so we can’t block Wuhan residents from entering Macau. But we have requested for them to not travel to Macau, or only after the disease is contained.

The WHO has said it will decide on Thursday whether to declare the outbreak a global health emergency, which would step up the international response.

The CE also considered that since cases have been recorded in almost all Chinese provinces it would be impossible to restrict them all from entering.

The first records of the new pneumonia coronavirus strain were first reported in Wuhan, with the two reported cases in Macau so far involving two tourists from the Hubei Province.

Currently, in isolation, both cases were considered as high-risk patients.

Today Chinese authorities have declared that starting from 10:00am, all outbound flights, trains, and public transportation systems will be halted in the 11 million people city of Wuhan.

“It is not such a serious situation now. Even during the SARS outbreak in Hong Kong, we did not bar entries. We just advise people from Wuhan to not come to Macau. They must obtain a visa, so customs authorities can help us avoid that visas are emitted,” he noted.

According to the CE, since December 1 of last year, about 5,000 Wuhan residents are believed to have traveled to Macau, including students, workers, tourists or just people visiting family relatives and tourists.

Just yesterday some 1,247 Wuhan or Hubei residents entered Macau, with 920 having left, the CE noted.

Some 2,256 Wuhan residents are believed to still be in Macau, a number Ho admitted only pertained to people staying in local hotels, and not including people who could be staying with friends or family relatives.

The government has also requested local travel agencies to not conduct tours to Wuhan and asked for travel agencies and hotels to establish good communications channels with the Office of the Secretary for Social Affairs and Culture.

“Secretary for Social Affairs and Culture Ao Ieong U already asked hotels to concentrate Wuhan or Hubei guests on specific floors so as to facilitate their close observation,” Ho added.

Body temperature checks and health inquiries are currently being conducted in the city’s borders, both by Macau and Zhuhai authorities, with people who show signs of fever or other symptoms connected to the new pneumonia virus requested to not leave the region where the case was found for now.

However while until know body temperature and health checks were only being conducted to people entering Macau, there will now be procedures also for people exiting the city.

Local authorities have also been following the health situation of 467 Macau students currently in Wuhan to see if they display any pneumonia symptoms, but with some having already returned to Macau.

Any Wuhan resident who requires medical care in the local public hospital will see its expenses covered by health authorities.

Wuhan was the epicenter of the pneumonia outbreak that has so far killed at least 17 people – all from the Hubei Province city – with more than 580 cases reported.