Conservation and restoration work has started on the tomb of Portugal’s 14th-century king Pedro I in the Monastery of Alcobaça, in Leiria district, that is expected to last around four months, the monastery has announced.

The work, overseen by conservator and restorer André Remígio, began on Monday, the International Day of Museums, which also marked the reopening of the monastery to the public after a two-week lockdown due to the Covid-19 pandemic.

The restoration is being carried out “in a work open to the public”, the monastery announced in a statement explaining that the tombs of Pedro and his long-time lover and, ultimately, wife Inês de Castro, which are both currently on show, “present various pathologies, namely dirt, deposition of debris, biological colonisation and the existence of countless silicon fragments” – remnants of moulds made in the early 1990s for reproductions that formed part of the 1992 Europalia exhibition dedicated to Portugal, in Brussels.

These traces of silicone are, according to the statement, “quite harmful ‘to the health’ of the stone, since they waterproof the surface, preventing it from breathing, which causes it to deteriorate in the affected areas.”

The tombs of Pedro and Inês de Castro are masterpieces of 14th century European tumulary art and the greatest exponents of Portuguese medieval tumulary art.

In its statement, the monastery stresses that the inclusion of the tombs was in 1989 “decisive in the World Heritage Committee’s decision to inscribe this monument on the World Heritage List” when the institution submitted its bid for classification by the United Nations Educational, Scientific and Cultural Organization (UNESCO).

On the 30th anniversary of this classification, last year, Portugal’s Directorate-General for Cultural Heritage decided to proceed with the restoration work, which should be completed within four months.

The tombs of Pedro and Inês may now again be visited in the monastery, which reopened to the public on Monday, with new safety rules for staff and visitors.

The conditions for admission, posted in the monument and on its website and Facebook page, include the mandatory use of face coverings, hand sanitising and the maintenance of a minimum distance of two metres.

For security reasons, the monastery dormitory and the upper floor of the cloister are closed to the public, the admission of visitors is subject to a maximum occupancy and no cash payments are being accepted.

What does return of Pakistani Seeds from Chinese space station means to Pakistan’s food... 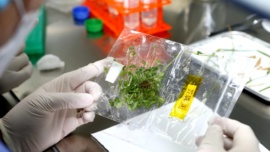 What does return of Pakistani Seeds from Chinese space station means to Pakistan’s food...

February 9, 2023
The new phase of seed cooperation between Pakistan and China is critically important for Pakistan...

February 9, 2023
A major trial wrapped up in Spain on Wednesday to determine responsibility for a 2013...

February 9, 2023
At least 18 people in southeastern Niger have died of meningitis in the past three...

What does return of Pakistani Seeds from Chinese space station means to Pakistan’s food security?