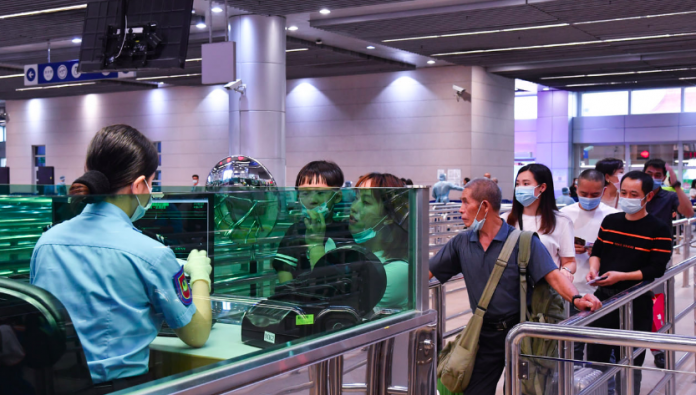 Chief Executive Ho Iat Seng has hinted that if no more confirmed cases are reported in Macau 14 days after the last confirmed case, Zhuhai could possibly ease its current entry restrictions.

This indication was provided by the General Union of Neighborhood Associations Chairman Chan Ka Leong, who along with other association representatives met with Ho yesterday to discuss the future 2022 policy address guidelines.

According to Chan, the CE is confident that Zhuhai will relax its customs clearance measures in the short term, but that another citywide mass testing initiative may be carried out before.

Since Macau began reporting local Covid-19 cases on September 25, Zhuhai announced 14-day quarantine measures for any entries via the SAR.

Macau has since then completed two rounds of COVID-testing covering all residents from September 25 to September 28, and then from October 4 to October 7.

As Macau reported the last local case on October 9, if no new cases are found after, the maximum 14-day length of border closure could extend until October 23.

Due to the city’s effective border closure with China since September 26, visitation between the Golden Week holiday period between October 1-7 averaged only 1,200 arrivals per day.

Inquired on the need of another citywide testing drive yesterday, Conde S. Januario Hospital Clinical Director, Dr. Tai Wa Hou explained that the purpose of massive testing is not for border crossing but rather to detect hidden cases in the community when there is no certainty about the transmission chains.

Therefore, he did not exclude the possibility of carrying out a new round of massive testing, if necessary.

The CE was also quoted as saying that achieving a high vaccination rate was an essential measure to prevent Covid-19 and allow the resumption of normal travel flows, he urged UGAMM to help the government in appealing to the population to get vaccinated as soon as possible, in order to meet the conditions for the recovery of the economy and the tourism sector.

The CE even emphasized at the meeting that many provinces and cities in the Mainland are willing to allow tourist groups to Macau however, they have refrained to do so due to the current low vaccination rate in the SAR.