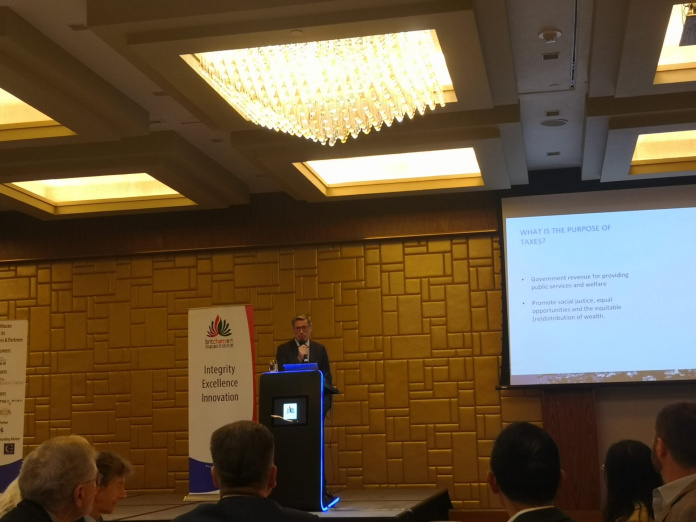 Proposed changes to the local tax code will not be a complete overhaul but needed updates to uniformize and upgrade outdated tax regulations in the SAR, lawyer and notary, Rui Filipe Oliveira, stated in a seminar on the matter held by the British Chamber of Commerce in Macao.

Draft bills for a revamp of the local tax code and a new legal framework for the exchange of information in tax matters was approved at the Legislative Assembly (AL), and will now proceed to committee evaluation and discussion.

Secretary for Economy and Finance Lei Wai Nong previously stated the changes will unify the rules of the separate tax laws enforced separately since the 1970’s, clearly defining the rights and obligations in the tax legal relations, and update the local Tax Code in accordance with international standards.

The bill introduces concepts such as tax resident and tax residence’ so as to ‘better comply with its international tax obligations’ and better ‘attract more foreign investors’ to the SAR and aims to ‘unify the separate rules of the current tax legislation, as well as to clearly define the rights and obligations in tax legal relations, in the tax judicial process, and in the process of tax enforcement.

The lawyer noted that the reform was pushed by court disputes surrounding issues such as stamp duty and tourism taxes, coupled with the need to upgrade local regulations and comply with Organisation for Economic Co-operation and Development (OECD) standards.

“Is there a tax revolution coming? The answer is no. What is coming is very simply a new body of laws that will coherently and connecting the dots because the system has been developed in the late 1970’s and the different tax laws enforced since then are sometimes not consistent or coherent,” the lawyer from MdME said during the talk.

“The new tax code will unify and organize the current system. There will also be changes in tax procedures which is important since [law practicioners] have sometimes difficulties dealing with tax authorities in many aspects. Having a clear set of rules and procedures is important for individuals and taxpayers to be able to enforce their rights”.

The tax planning expert also noted that the bill also propose an increase in authority and powers given to tax authorities, something he saw as “part of any complete tax system” while filling some regulatory blanks concerning judicial tax procedures and tax enforcement proceedings.

“There have been none, so we have been litigating in courts with the use of the general administrative proceedings code. Very importantly also is that there will be tax regulation enforcement procedures. We have been dealing with his matter based on a law from 1951, which is sometimes enforced and sometimes not […] It is something of great importance because the tax authority has the ability based on a non-paid tax to seize your assets,” Oliveira indicated.

Still, the lawyer also underlined that even though most of the proposed changes in the tax code structure are not “that significant” as they stand, some changes, such as those concerning corporate liability, could be.

He expressed, for example, that there will be secondary liability of the members of corporate bodies, administrators, asset managers, and tax representatives, meaning that in the future business they could be liable for their businesses’ tax debts.

Some 136 countries – including Mainland China – have ratified the agreement, which is expected to come into effect globally in 2023 and raise an additional US$150 billion in annual tax revenue, according to the Organisation for Economic Cooperation and Development.

“The target for this is multinational enterprises that have a significant level of revenue. For example, the relocation of tax revenue will be targetting multinational enterprises with a global turnover of over 20 billion euros, almost half of Macau’s GDP. This is to target very large players and winners of globalization that manage to play around and pick lower tax jurisdictions,” he noted.

“The corporate tax would also be implemented for multinationals with revenues of about 750 million euros”.

The lawyer considered that most “ordinary businesses” in Macau would likely not be impacted by the changes considering their scale, with exact details concerning the agremeent enforcement still having to be fleshed out.