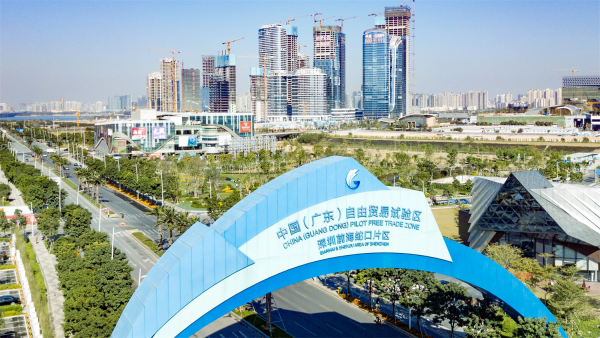 The Qianhai District in Shenzhen and Nansha District in Guangzhou ranked 1st and 2nd respectively in the “2021-2022 China Pilot Free Trade Zone Institutional Innovation Index”, while the ranking of Hengqin dropped to 11th.

The two free trade zones that ranked 1st and 2nd place in the index report – Qianhai District and Nansha District – are both located in the Guangdong-Hong Kong-Macau Greater Bay Area, of which the Qianhai District in Shenzhen ranked first in terms of “transformation of government functions” and “Legal environment”, while the Nansha District in Guangzhou ranked first in “trade facilitation” and “investment liberalization” indicators.

The Qianhai Shenzhen-Hong Kong Modern Service Industry Cooperation Zone is an experimental business zone to facilitate finance, logistics, and IT services activity between Mainland China and Hong Kong, with its future aim to be assisting in further integrating Macau and Hong Kong’s economies with the Greater Bay Area.

Also, Nansha District – the sixth state-level new area (special economic and political administration zone) – was proposed by China’s State Council to be built into a “center of strategic importance that collaborates with Hong Kong and Macau”, in order to benefit the GBA and beyond.

The Nansha District which is gradually narrowing its gap with the Qianhai District, has its biggest advantage lies in the comprehensive cooperation with Macau and Hong Kong, and the continuous promotion of the construction of an innovation and entrepreneurship ecosystem, relying on the support of the national strategy, Fu Zhengping, Director of the Sun Yat-Sen University Free Trade Zone Comprehensive Research Institute said as reported by Yangcheng Evening News.

Meanwhile, the ranking of the Guangdong-Macau In-depth cooperation Zone in Hengqin has dropped slightly to 11.

Regarding the future direction of institutional innovation of the pilot free trade zones, the report indicated that the development of new trade formats should be promoted, by further generating the efficient and orderly exchange of production factors.

At present, the three free trade zones in the GBA have made explorations in such exchanges, such as promoting mutual recognition of professional qualifications with Macau and Hong Kong, which has effectively promoted the development of service trade.

December 6, 2022
A fire broke out next to the London office of an Iranian opposition group, police...

December 6, 2022
The European Union reached an agreement Tuesday to ban the import of products including coffee,...