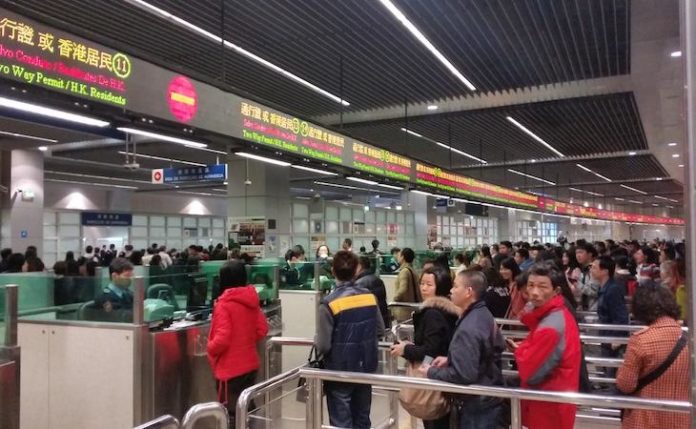 Macau (MNA) – The Secretary for Transport and Public Works Raimundo Arrais do Rosário said on Thursday that the only the foundations of the new Qingmao Border in Ilha Verde will be finished in 2019, and that he could not guarantee the whole project would be completed next year.

“I did not say that the Qingmao Border would be finished by the end of next year. The new access includes a building and a corridor. The foundation works for the building will finished in the beginning of 2019, and all foundation works will only be concluded after the second quarter of next year,” the Secretary said today.

The Secretary made the comments on the new Zhuhai-Macau border during the 2019 Policy Address Q&A on Transport and Public Works held today as a response to questions by legislator Chan Hong on the new border, planned to ease traffic at the nearby Gongbei Border.

“People are worried about the progress of the construction and hope the new border could start operating next year as a 24/7 checkpoint. But will its opening impact traffic has it has happened with the Hong Kong-Zhuhai-Macau Bridge opening?” the legislator asked.

A MOP106 million (US$13.1 million) contract for the Qingmao Border project plan was granted to Chinese state-owned group Guangdong Nam Yue Group Limited in April, 2017, with the same company receiving two contracts without public tender this year to build the border checkpoint building and corridor foundations at Avenida do Comendador Ho Yin and Estrada do Canal dos Patos for a total amount of MOP890 million.

According to information in the Infrastructure Development Office (GDI) foundation works for the new building and corridor of the new border started this year and are expected to be finished on May 3, 2019.

The Secretary also noted that the current construction rhythm was already achieved through allowing extra construction time for the project on all calendar days, from 8:00 am to 10:00 pm.

Guangdong Nam Yue also received a MOP70 million contract in August of this year to develop a plan to reorganise the Canal dos Patos former canal area separating Zhuhai and Macau, with the plan to take seven months to complete.

The new border access is being built in Avenida do Comendador Ho Yin in the same area as the old Macau Wholesale Market building used to be located, before being relocated to the Zhuhai-Macau Cross Border Industrial Zone.

The project was defined as costing more than MOP1 billion by the GDI.

The new border access between Macau and Guangdong will operate 24/7 through a new border control model  ‘full checkpoint inspection’, in which residents from Macau travelling to Mainland China need only present their identity cards at the border, while visitors from China heading to Macau need only present the relevant document.