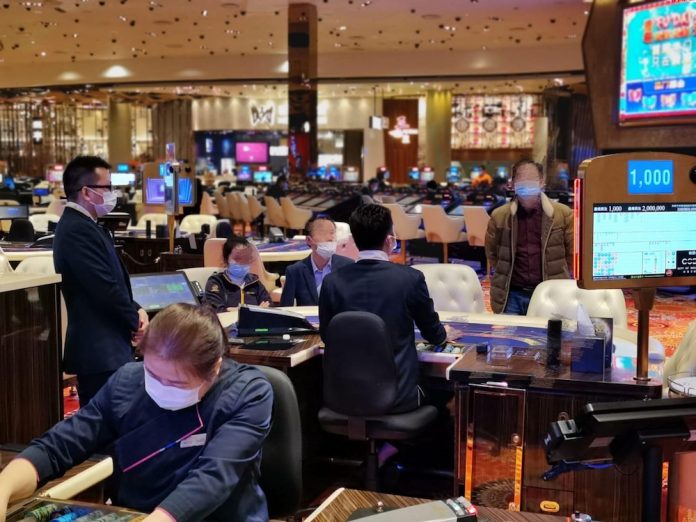 Last week all six gaming operators issued guidelines mandating that in order to help reduce the transmission risk and the spread of Covid-19 to others, all team members working in Macau are required to present a vaccination certificate or a negative test certificate starting from October 25.

Team members unable to present a negative nucleic acid test result are prohibited to work and will be considered as an unjustified absence with a disciplinary action in place unless team members applied their own leaves in advance.

“The measure now implemented seems to me to be adequate since workers still have a choice between receiving the vaccine or undergoing core acid tests,” Helena Kok, an employment lawyer of law firm MdME told MNA.

“Let’s not forget that this comes from Health Bureau technical guidelines. It is not an initiative of game operators and other employers. Gaming operators are under government supervision, under the Gaming Inspection and Co-ordination Bureau (DICJ) and do not operate with full autonomy or freedom”

The labour law expert added that by imposing such guidelines employers are not only looking out for the health of their workers but also the public that attends their establishments, in this case, integrated resorts.

Health authorities have previously indicated that employers would not be allowed to impose vaccination guidelines that directly threaten to dismissal employees if failing to comply, repeatedly underlining the ‘voluntary principle’ of vaccination.

During this year all of the six operators offered incentives to encourage their staff to be vaccinated against Covid-19, in forms of leave or even a  cash prize, including even providing MOP1,000 (US$125) to each staff member who got the jab and the chance to be able to take part in a draw to win one of six cash prizes each worth MOP1 million.

The more recent measures however mirror a similar policy enforced by the Macau SAR government for public workers and effective since September 27.

“The Government, through the Health Bureau, issued instructions to public and private entities that employers are to implement certain measures to ensure proper working conditions and which include the need for the employees to either get vaccinated or show a negative covid test every other week,” lawyer Jose Alvares noted to MNA.

“According to article 12 of the Labour Law, employers are obliged to provide a safe (from a health point of view) working environment, including adhering to the instructions issued by competent authorities in this regard. As such, private entities are undoubtedly bound to impose the referred requirements and they actually mirror the ones approved for the public servants”.

For the lawyer, the Health Bureau instructions “trump any other considerations” and employers or employees not agreeing with the policy would have to challenge the government’s decision and not the employers’ implementation of the same.

“In this last regard, I would find such a challenge without cause as vaccines have been proven to protect not only those that inoculated but also by reducing the viral load present on the individual at a given time, it will also help curb transmission,” Alvares added.

“It is understandable that the Government is concerned that entire departments or even companies – especially those critical to society – imagine the electricity or water company – could have their teams fallen sick due to being unvaccinated and create major disruptions to such operations”.

For the lawyer the Macau SAR Government still considers the vaccines as a decision to be made by each individual, meaning, residents can not be forced to take the vaccine if they do not want, however, certain restrictions can be imposed so as to “strike a balance with the referred concerns of workers’ safety”.

“Note that the one-week validity of the tests is the maximum, meaning employers could actually set shorter windows. As far as I understand, airport staff is required to undertake a test every other day or within 48 hours,” Alvares added.

According to the most recent update, a total of 403,547, people in Macau have been vaccinated with at least a dose of either Sinopharm or BioNTech vaccines, but only 319,670 received the required two doses.

Chief Executive Ho Iat Seng previously warned that local authorities could start a conversation with other regions or countries concerning quarantine exemptions or bilateral border reopenings if the SAR reached at least an 80 per cent vaccination rate.

The overall vaccination rate in Macau reached 59 per cent, some 66.5 per cent in the different target groups 12 years or above.

Since Macau began reporting local Covid-19 cases on September 25 with the local outbreak prompting Zhuhai to impose 14-day quarantine measures for any entries via the SAR.

Macau has since then completed two rounds of COVID-testing covering all residents, imposed temporarily closures of entertainment and public venues, and set different lockdown areas in the SAR to bring the local flare under control.

Due to the city’s effective border closure with China visitation between the Golden Week holiday period between October 1-7 averaged only 1,200 arrivals per day and again delayed the predicted economic recovery of the city.

The International Monetary Fund (IMF) has also already downgraded its predictions for economic growth to be reported by the Macau SAR in 2021, to a 20.4 per cent rise in its real gross domestic product (GDP).

“If local workers complain about the financial impact that the pandemic brings them, namely the reduction of wages, being subject to unpaid vacations, or even the loss of jobs, they should think about how to help Macau’s economy back to go up. Now, having a high vaccination rate helps immensely in fighting the pandemic,” Kok expressed to MNA.

“With no flow of people to Macau, there is no economy that can stand it. For me, the situation a quo no longer allows us to focus only on the rights and duties of an employment relationship, but the public and economic health of Macau”.