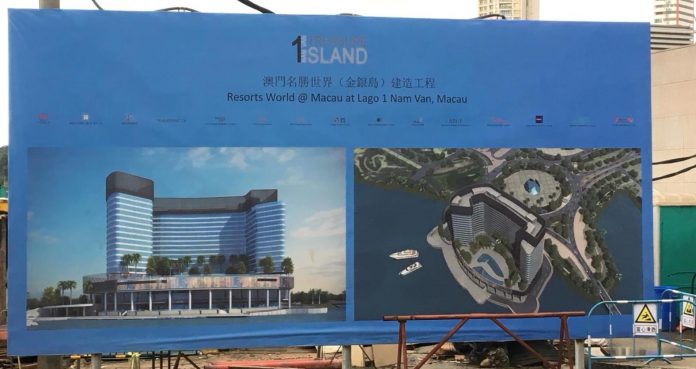 Macau (MNA) – A billboard set by Treasure Island Entertainment Company Ltd, the company responsible for a hotel project currently being built at Nam Vam Lake, indicates that the project will be named Resorts World, as in the known Genting Group integrated resort franchise, and reveals a design representation of the future project.

The 8,100 square meters land plot near Praca Ferreira Amaral is indirectly owned by Malaysian hotel and gaming corporation Genting Group, with the group having express in its most recent annual report that it plans to develop a hotel and casino in the site.

According to a billboard at the construction site a hotel named Resorts World is planned for the land plot, with Resorts World Genting being a chain of integrated resorts and theme parks developed by the Malaysian group.

The design mock-up also seems to indicates intentions to have a swimming pool and yacht berths.

As previously reported by MNA, the Land, Public Works and Transport Bureau (DSSOPT) granted Treasure Island an extension of the construction license for 36 months starting from July 19, 2017.

According to a DSSOPT announcement on site, a construction license was issued on May 2 of this year and valid until July 7 for foundation works, which are being carried out by China Civil Engineering Construction Company (Macau).

A development plan for the area published in 2008 at Official Gazette – the only document mentioning Treasure Island in the public record – included the construction of a 21-storey building for a five-star hotel with a gross floor area of 70,284 square meters, a parking lot of 12,080 square meters and a free area with an area of 5,581 square meters.

Initial plans by Genting included a casino in the hotel to be operated by SJM, but with this plans later shelved.

However, in its financial report for the six months ending in December 31, 2018 Genting Hong Kong states that the land plot is to be used for the development of hospitality facilities and with the group stating its intention to open a casino subject to approval of the Macau government.

The land plot – described by Genting Hong Kong as ‘1 Lago Nam Van, Macao’ – is said to have a government lease term lasting until June 24, 2033.

According to company documents, Treasure Island is currently headed by local businessman Kwan Yany Yan Chi – who founded the company – as its chairman of the board, with his brother Kwan Yan Ming also being an administrator.

MNA has previously made several requests for further information on the project to Mr. Kwan Yany and to his company, but with no success.