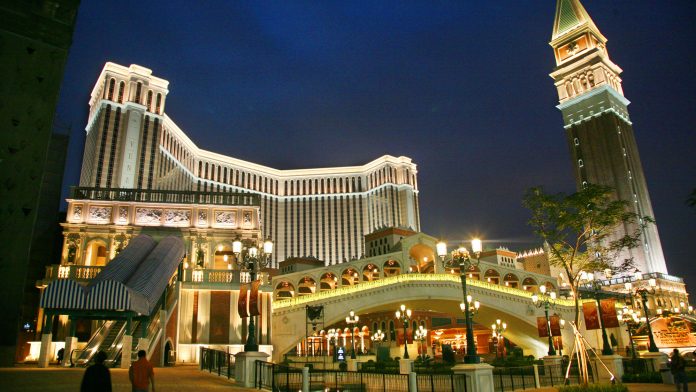 On Tuesday Las Vegas Sands Corp confirmed Bloomberg reports that is was pondering selling its Las Vegas properties for some US$6 billion (MOP47.8 billion), including its casino resorts the Venetian Las Vegas and the Palazzo, as well as Sands Expo and Convention Center, all located by the Las Vegas Strip.

“Las Vegas Sands is losing millions of dollars a day in supporting [their operations Asia]. They are also adding The Londoner, which will take a lot of money, and an extension wing to Marina Bay Sands,” the managing director at consultancy company 2nt8 Limited told MNA.

“Selling some of their assets at a good price is not a desperate going-out-of-business sale. Naturally, the fact that there’s some cash needed could be one of the many determinants to whether this will or not happen”

Tash made the comments after giving a presentation today (Wednesday) at an event hosted by France Macau Chamber of Commerce.

Las Vegas Sands Corp. reported an 82 per cent quarter-to-quarter drop in net revenue to some US$586 million, with some US$610 million in operating losses.

Its local gaming concessionaire, Sands China has reported some US$562 million in net losses for the third quarter of this year, with total net revenues generated by the concessionaire decreased by 92.1 per cent year-on-year to US$167 million.

At the same time, the group is proceeding with US$2.2 billion capital investment to revamp its Sands Cotai property into The Londoner Macao, while dealing with the daily expenses of maintaining properties with dramatically lower guest numbers.

“[Adelson] has three areas he makes money, Las Vegas, Singapore and Macau. If I have to sell an asset to pay for supporting the other two. If I have three horses and I need to kill one to feed the other two it would be Las Vegas. It just doesn’t generate as much,” Tash noted.

According to a Sanford C. Bernstein note, Las Vegas ‘only ‘generated US$487 million of the casino group’s of property EBITDA last year when compared to US$3.2 billion in Macau and US$1.7 billion in Singapore.

At the same time, Adelson itself expressed in the last financial report conference call that the group is committed to to “invest billions of digital investment dollars” and extend its contributions to Macau’s diversification and evolution, due to optimism over the city’s recovery outlook.

The analyst also did not give any traction to the possibility that the move could be a way by Sands to reduce any possible risk of losing a future gaming license renewal in 2022, by removing its US operations out of the picture in a possible continuation of trade tensions between the US and China if President Donal Trump is re-elected.

Adelson and his wife, Miriam Adelson, have recently donated US$75 million to a new super political action committee (PAC) backing US President Donald Trump’s re-election and making the couple the highest donors in the Republican campaign efforts.

“It is difficult for an Adelson, which is really close to the Republican party and Trump, having supported it to divest and say I’m no longer associated with it, so shutting down a casino and supporting a presidential candidate is very different,” Tash added.

The gaming analysts considered that in case a gaming license was to lose its concession in the future tender process it would definitely be a US-based operator, however, he could not see the business move to be connected to political considerations.

“It’s the other way around, usually, Las Vegas or Atlantic City casinos shut down their Macau operations to be able to get a license. I don’t think that’s in the Adelson mindset, to do anything to get a license,” Tash noted.

“If everything it would give even more leverage from the government to demand more from him”.