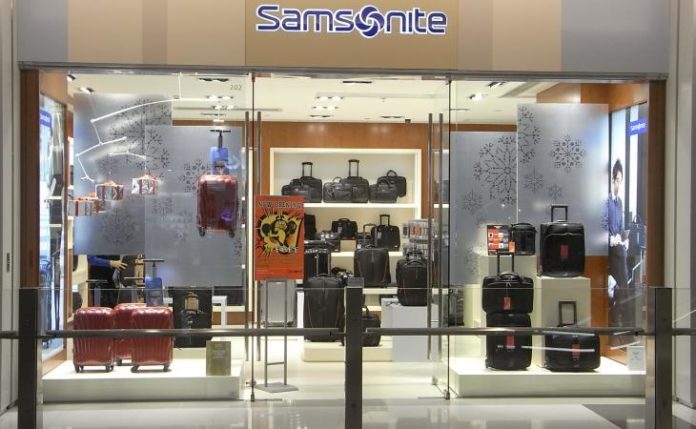 Luggage manufacturer Samsonite International S.A. (Samsonite) registered an 11 per cent year-on-year decrease in profit in the first six months of 2016 to US$82.4 million (MOP658 million) according to a company filing with the Hong Kong Stock Exchange. The US$10.4 million decrease in profits of the parent company of Samsonite Macau Lda. comes despite a 1.1 per cent year-on-year increase in net sales to US$1.2 billion, a record level for the company. Samsonite currently operates a number of retail stores in the MSAR, including in The Venetian and in Galaxy Phase II in Cotai. Macau and Hong Kong sales reeling In the group’s largest market – Asia – sales had a ‘slow start’ during the period, notes the filing, with the group’s net sales in the Macau and Hong Kong markets declining 15.6 per cent to US$32.1 million. The group noted that the consumer shift away from TV home shopping and department store channels towards e-commerce had largely affected the group’s operations; in addition, fewer Chinese shoppers from the Mainland visited during the six-month period. In the first half of 2016, Hong Kong and Macau represented 6.8 per cent of Samsonite’s net sales, a 1.3 per cent decrease from the same period of last year The company’s net sales in Asia (including Australia) in the first half of 2016 increased by 3.7 per cent due to the low value of some of the region’s major currencies, with the total value of net sales in that period amounting to US$470.6 million, similar to the same period of 2015. Samsonite also saw its adjusted earnings before interest, taxation, depreciation and amortisation (EBITDA) increase 0.2 per cent year-on-year in the first six months of 2016 to reach US$190.3 million. Tumi In the release, Samsonite Chairman Timothy Charles Parker mentioned that the purchase of American-based luggage manufacturer Tumi Holdings Inc. (Tumi) at the beginning of August was the “most important and positive development” the company had announced to date but that in the short term Samsonite was “facing the most challenging conditions in the market since the global credit crisis in 2008”. Samsonite finalised its US$1.8 billion purchase of Tumi in anticipation of expanding the brand’s business in Asia and Europe, Business Daily previously reported. Currently, Tumi has two stores in the city, located in The Venetian and in the DSF Galleria City of City of Dreams. Currency depreciation The Samsonite Chairman believes the drop in profits resulted from the continued depreciation of the company’s most important trading currencies against the US Dollar. Excluding foreign currency depreciation effects, in the first half of 2016 Samsonite registered a 4.1 per cent year-on-year increase in net sales and a 3.3 per cent year-on-year increase in adjusted EBITDA. However the foreign currency effect “pared these increases down to more marginal advances” according to Parker.