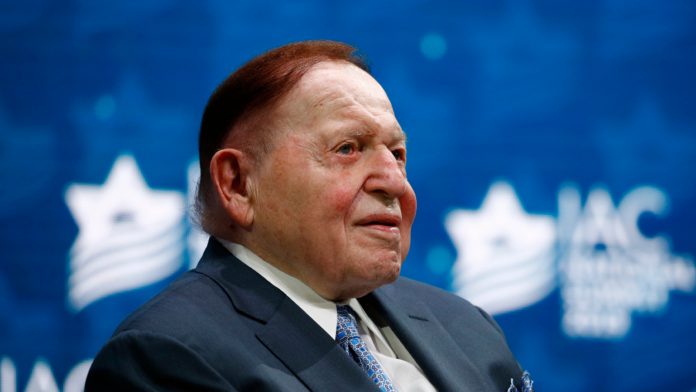 Analysts consulted by Macau News Agency believe that the death of Sheldon Adelson will likely not have an impact in the management or future strategy of Las Vegas Sands and Sands China, since the transition had already been well-anticipated and planned, but expect the considerable influence his relatives have on the group to increase.

The 87-year old American gaming tycoon passed away yesterday (Tuesday) due to complications related to treatment for non-Hodgkin’s lymphoma.

Five days prior to the announcement of his death the billionaire casino magnate and Republican megadonor started a medical leave of absence, with President and Chief Operating Officer Robert G. Goldstein taking over his positions in Sands China.

“I don’t expect to see any significant changes in the management of LVS, or of its Macau and Singapore subsidiaries as a result of Mr. Adelson’s passing. He has had stable management in place for some years in all of the geographically diverse operations of the group,” David Green, Principal at Newpage Consulting, told MNA.

“This is not the existential crisis that it could have been had the timing of his death coincided with, say, the global financial crisis, which LVS navigated successfully in large part because Mr. Adelson provided financial support to the group. It now has the critical mass, leadership, geographic diversity and gravitas to stand strong, notwithstanding the demise of its founder and leader”.

Meanwhile, analysts with Sanford C. Bernstein underlined that Adelson’s health had been deteriorating for some time and a transition had already been prepared.

“We see company management well-positioned to maintain the broad strategy that has been in place. With long-term Sands Executive, Rob Goldstein, who has been with the company since 1995 and became Acting CEO and Chairman of both LVS and Sands China last week, the company remains in solid hands,” the brokerage indicated.

As for the company’s shareholding structure, Bernstein noted that the Adelson family retains control of nearly 57 per cent of LVS, with the businessman having transferred millions of shares of the casino operator’s stock to his wife, Dr. Miriam Adelson, last year, laving the 75-year old Israeli American in control of a large bulk of Las Vegas Sands’ shares through several trusts.

“Patrick Dumont […] has been with Sands since 2010 and we expect him to take a larger role in the company working closely with Goldstein to help transition to the next leg of leadership at Sands,” the brokerage indicated in a note.

For gaming expert Ben Lee, “without its visionary leader”, Sands China was expected to go through a transition period, during which one would not be able to see many managing differences, but noted that his widow will want to have a say in the group’s future.

“What will ultimately emerge will depend very much on whether Adelson’s widow, Miriam, wants to take over the reins of the company. There is a possibility that the time may be right to divest and most likely to China-linked interests, to preserve their chances of getting a new Macau concession,” the managing partner at iGamix told MNA.

As with the remaining gaming concessionaires, Sands China was greatly impacted by the Covid-19 pandemic last year, as its resorts and casinos were suddenly deprived of much of its patrons and guests.

Sands China had reported an 82 per cent year-on-year drop in net revenues to some US$586 million, with some US$731 million in net losses.

In his last statement made for the latest financial report, Adelson had believed the recovery process from the Covid-19 pandemic continued to progress in each of Sands’ markets, and that the group had enough financial strength support for its previously announced capital expenditure programs in both Macau and Singapore.

In October 2020, Las Vegas Sands said it was considering selling its Vegas properties — the Venetian Resort, the Palazzo and the Sands Expo Center — which would leave it with a half-dozen sites in the larger Asian markets of Macau and Singapore.

The group is also preparing the partial opening of its latest local project in February, the US$2 billion redevelopment of its Sands Cotai Central property in Cotai into The Londoner Macao, the last of many projects the gaming businessman initiated in a city that made the largest contribution to the considerable fortune he amassed during his life.