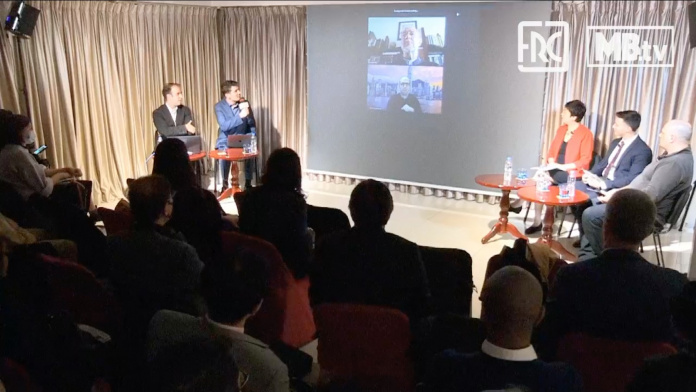 As China is leading in the development of digital currency with the digital yuan, the city has to catch up in the areas of regulations, technology and infrastructure to embrace virtual money.

This view is advanced by a panel of experts at the latest session of “MBtv/FRC Debates” held offline and online on Wednesday evening, which was co-organised by Macau Business/MNA and the Rui Cunha Foundation (FRC) in partnership with the China Observatory.

At the seminar titled “Digital Currency and the Future of Money” held at the Art Gallery of FRC in the city, Jean Chen, Dean of the Faculty of Business Administration and Chair Professor of Accounting and Finance at University of Macau (UM), remarked, “In terms of the speed of the development of digital currency, China is in a leading position in the international stage.”

With tests of the digital yuan now being carried out in four major economic powerhouses of the country — cities of Suzhou, Chengdu, Xiongan and Shenzhen — as well as the venues of the 2022 Winter Olympics held in Beijing and nearby Hebei province, the central government has said these pilot tests could extend to the Guangdong-Hong Kong-Macau Greater Bay Area.

“That is something Macau has to think about — if they really want to adopt digital currency like the digital yuan they have to develop a regulatory framework,” Prof Chen told audiences on Wednesday.

Besides an optimal institutional environment, the scholar points out the city also has to improve in the areas of technology and infrastructure to embrace this virtual trend. “For any places, not only limited to Macau, the infrastructure is also important, for instance, the Internet connection or coverage that is the backbone of the digital currency,” she illustrated.

In a Legislative Assembly session in April, Macau Chief Executive Ho Iat Seng confirmed the local authorities are working with People’s Bank of China about the feasibility of adopting the digital yuan in the city, adding they also planned to amend the local regulations to govern digital currencies.

Oriol Caudevilla, Co-Leader of CBDC and Member of Financial Inclusion Working Groups at the Global Impact Fintech Forum (GIFT) from Hong Kong, pointed out one of the major discrepancies: “Central bank digital currency is centralised while cryptocurrency is not… CBDC is similar to the cash we use now while cryptocurrency is more like an asset class or commodity.”

Indeed, CBDC is basically the digital form of money issued and backed by the authorities, while the decentralised cryptocurrencies are beyond the control of the regulators.

The main reason behind the introduction of the digital yuan by the central government is to expedite the internationalisation of yuan, as Beijing has tried to do so for years in vain to challenge the dominant status of the United States dollar, Mr. Caudevilla added.

Another panelist, Daniel Farinha from the University of Saint Joseph in Macau, observed that China has strengthened efforts to clamp down cryptocurrencies in recent years as it is developing the digital yuan, but the senior lecturer saw no reasons for any jurisdictions to take a harsh stance on cryptocurrencies.

“What we could do more is to demystify the technologies that have been created for cryptocurrency because there are a lot of confusions, fears, uncertainties and doubts about this topic,” he said. “Unfortunately, the regulators are partly to blame because they keep on throwing out things like money laundering, criminal activities, terror financing, which could not necessarily blame on cryptocurrency but the way money works.”

The academic added the technologies behind cryptocurrencies could actually be adopted in many other areas, for instance, CBDC also utilises technologies from cryptocurrencies like the blockchain technology.
Daniel de Senna Fernandes, a consultant at the local law firm Riquito Advogados, also shared a similar perspective. Speaking on the panel on Wednesday, he noted as the Macau authorities are revising regulations to adopt the digital yuan they could take a step further to embrace cryptocurrencies for the development of the city.

More details of this latest session of “MBtv/FRC Debates” will be available in the December issue of Macau Business.