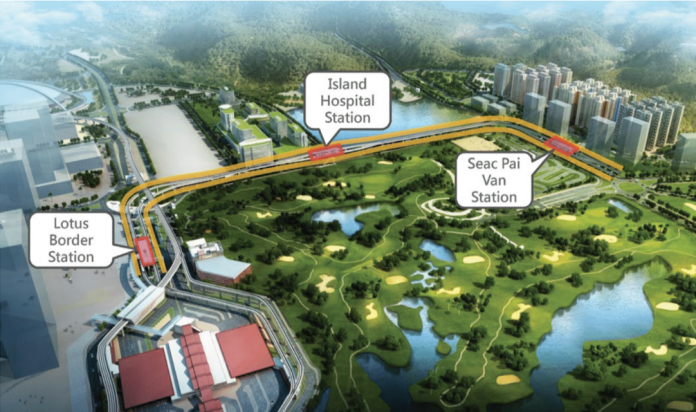 Macau (MNA) – The Transportation Infrastructure Office (GIT) said on Tuesday that the public tender for the main construction project of the Seac Pai Van Light Rail Transit (LRT) line will open in early 2019.

The information was provided by a GIT representative during a press conference by the Road Works Coordination Group today to reveal the road works projects that will be conducted in 2019.

In March of this year, China Road and Bridge Corporation received an MOP131.6 million (US$16.3 million) contract for the construction of the Seac Pai Van line foundations, main structure, temporary roads and construction site facilities, works expected to take 131 days to conclude.

According to the GIT, these preliminary works are being conducted at Rotunda de Flor de Lotus. After the main construction tender is conducted, temporary public lanes to ease traffic disruption will be built in the roundabout, in Estrada Flor de Lotus and Estrada de Seac Pai Van.

The first Seac Pai Van Line feasibility study begun in 2013, with some estimates predicting that the smallest of the lines included in the Taipa and Macau LRT project could maybe only be finished by 2024.

The Taipa LRT line is expected to start operating in 2019.

The GIT also indicated that preparatory works for the Barra LRT station are almost concluded, and that the construction of the station itself will soon be initiated.

The first LRT station in the Macau Peninsula, the Barra Station will be built in the area near the Barra bus terminus at Avenida Panorâmica do Lago Sai Van, with an LRT Public Transport Interchange also built nearby.

This week the Secretary for Transport and Public Works, Raimundo Arrais do Rosário, revealed that the total cost for developing the Barra LRT station would be around MOP4.5 billion.

According to the GIT, traffic conditions in Barra will remain the same until the second quarter of next year when works to build a temporary lane will be initiated, with other temporary lanes to be built near Sai Van Lake in the third quarter of 2019.

After these provisional lanes are completed, works to connect the Sai Van Bridge with the the Barra LRT will start.

Local electric energy supplier CEM also indicated at the Group meeting that it will start energy supply works for the station in April 2019.