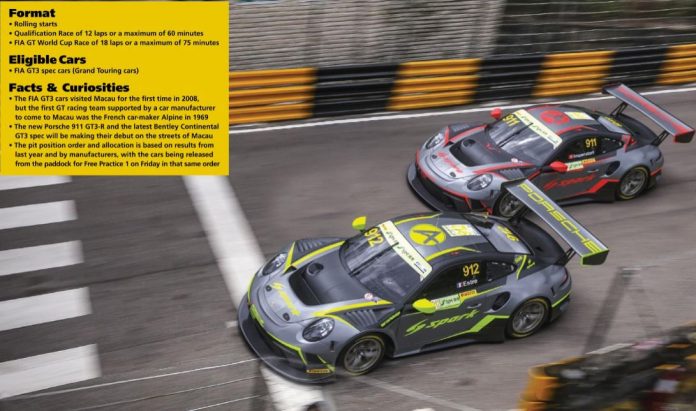 Celebrating its 12th edition in 2019, the Macau GT Cup has been designated by the FIA GT World Cup for the fifth consecutive year. When it burst on to the scene in 2008, the Macau GT Cup was mainly a race for Gentleman Drivers with deep pockets, but it immediately grabbed the attention of the world’s leading team and drivers, as well as of the most prestigious automakers.

Four manufacturers – Audi, BMW, Mercedes and Porsche – will take on Guia Circuit this year. After two editions marked by spectacular accidents, with no physical consequences for the drivers, but that went viral on social media, last year’s edition was a very professional race. Spectators will be hoping for something in the middle.

1 Edoardo Mortara (Mercedes): Fan-favourite “Mr Macau” is a sure bet for the win. He had been away from GT3 racing, but the Swiss-Italian has been collecting trophies in the Guia Circuit like no other since his time in F3.

2 Maro Engel (Mercedes): The two-time winner of the Macau GT Cup event is one of the best GT3 racers in the world. He also knows the Mercedes-AMG GT3 like few others. Last year’s second place was not enough to please him.

3 Augusto Farfus (BMW): Farfus’s win last year was very emotional for a number of reasons, the most important being that it was the last one with Charly Lamm at the helm of BMW Team Schnitzer. The Brazilian will be looking to make Charly proud once again.

4 Earl Bamber (Porsche): The two-time Le Mans winner from New Zealand narrowly missed out on the podium in 2016 and 2018, finishing fourth on both occasions.

5 Laurens Vanthoor (Porsche): On his fifth visit to the Guia Circuit, Vanthoor, who famously won the 2016 race despite finishing the race on his roof with a Audi, knows exactly what it takes to win the street fight in Macau.

Only cars homologated under the FIA’s current GT3 regulations are permitted to enter in the FIA GT World Cup, and from the dozen car manufacturers involved in the category, only German brands – Audi, BMW, Mercedes-Benz and Porsche – are bidding to become the next champion over the Macau Grand Prix weekend.

In the recent past, Aston Martin, Honda, McLaren, Nissan or Lamborghini fielded cars in the race, but this year it will be a battle between the “big four.” The German superiority in the race over the years is visible in its “hall of fame”: in the eleven editions of the Macau GT Cup, the German manufacturers won nine, and since the introduction of the FIA GT Word Cup only the Deutsche Fahrzeughersteller took the honours. However, this doesn’t mean we have fewer cars in the starting grid this year. In fact, the field increased by two entries compared to 2018 – 17 drivers from 12 different countries – although with one fewer manufacturer, as Nissan is not represented this time.

“We received 18 pre-paid entries and 17 will be on the grid”, says Benjamin Franassovici, the Co-coordinator of the FIA GT World Cup. “That’s very good for such a unique event. Twenty cars would have been nice – that’s our optimum number – and with a little more luck we would have achieved that. But it is never easy at the end of a long season, with all the GT racing options that now exist, to ask teams and manufacturers to find additional budget for an event like Macau.”

Being an FIA manufacturers targeted race, this is not supposed to be a low-cost race. Budgets can easily be over 1 million MOP per entry, and the huge accidents of the first editions certainly scared a lot of potential entries; mainly the privateers who usually fill up the grids in GT racing. It is fair to say that the organiser put up a few measures to attract more entries this year. Silver-rated drivers were welcomed to join the ranks, significantly bolstering the pool of racing talent eligible to enter the end-of-year event.

“I honestly believe there is no bigger challenge in GT racing than the streets of Macau. And you have to be courageous to go head-to-head against the big four factories: Mercedes-AMG, Porsche, Audi and BMW. Having said that, we were close to securing a couple more manufacturers – very close in fact. From SRO’s point of view, we’re very happy; not least because some of our Blancpain GT World Challenge Asia entries – the Drivers’ Champion and some Chinese teams – are tackling Macau for the first time this year,” Franassovici concludes.

2019 will represent the fifth running of the FIA GT World Cup as part of the iconic Macau weekend. Last year’s contest was won by the BMW M6 GT3 of Augusto Farfus, who secured the Bavarian marque; its first GT win on the uniquely demanding Macau streets. This year’s entry list is full of stars, with factory or works-supported entries, including the previous four FIA GT World Cup winners Edoardo Mortara, Maro Engel, Laurens Vanthoor and Augusto Farfus Jr, who have eight wins in the race between them, are back to do it all again. Curiously, no driver has ever been able to successfully defend their title the following season.

The FIA GT World Cup manufacturers’ title will go to the manufacturer of the car driven by the winning driver. Surely, a German car manufacturer…

The Italians, the British and the Japanese. Ferrari had said no to taking part in an event that the FIA bills as a “showcase for GT manufacturers” from the very start. Ferrari private teams showed up before in Macau but with very humble results. After 2009 and 2010 Macau GT Cup race wins, Lamborghini doesn’t have fond memories of the Guia Circuit. Macau has been harsh to Sant’Agata Bolognese cars, and since the FFF Racing Team moved to Europe, the Italian brand of Group VAG lost its racing arm in the region.

There are three British manufacturers well represented in GT3 class – Aston Martin, Bentley and McLaren – but all of them are looking to find a partner in Asia. Craft-Bamboo Racing was chosen by Aston Martin Racing to represent the marque at the inaugural FIA GT World Cup, with the Hong Kong team fielding a pair of Aston Martin V12 Vantage GT3. But since the Frank Yu-owned team moved to the German camp, Aston Martin couldn’t find a replacement. Also looking to increasing its presence in the region is Bentley, following the end of its partnership with Absolute Racing and a short stint with Phoenix Racing Asia. There were attempts to run a car this year but it didn’t come to fruition. The Crewe machines have not been seen in Macau since 2016. The same is true for McLaren, which is seeking further interest in the new 720S GT3 model. McLaren Automotive ended in court its relationship with CRS, known to many in the racing world as McLaren GT, and the factory team had a pretty quiet year.

The Japanese brands’ GT3 customer racing has been a bit of a disappointment with residual sales out of Japan. Nissan has been more active than Honda or Lexus, and competed for the first time in last year’s race with three cars. Unfortunately, KCMG, the Japanese manufacturer’s representative in the Intercontinental GT Challenge, couldn’t find a way to race in Macau and be at South Africa’s Kyalami in the weekend after.