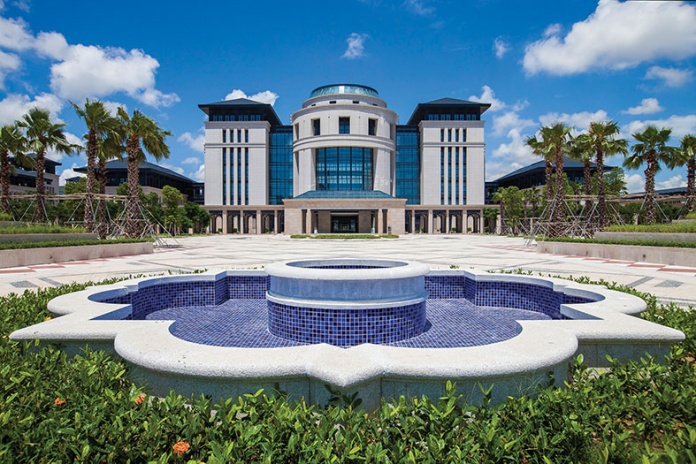 Rising to the Challenge

Over the course of these four decades, higher education witnessed a staggering growth and transformation in line with the city’s development.

Since 2000, and even earlier during the Portuguese administration, public and private higher education institutions have been receiving generous support from the Government.

At this juncture, one can argue that higher education in Macau is at a turning point. The changes that are set to take place are not only the result of the recently released Long-Term Plan for Tertiary Education (2021-2030), but also of the Chief Executive’s approach to higher education financing and development.

A new paradigm may emerge now with a stronger focus on ties between universities and the business sector, forging a model not only less reliant on public funding but also capable of further involving higher education institutions in the wider push for economic diversification, trough spinoffs resulting from transfer of technology.

Against the backdrop of higher stakes, we review the development of the city’s higher education sector and delve into the future direction of tertiary education, taking into account the Greater Bay Area regional integration process.

P.S.: Some local government departments have a tendency not to be particularly responsive when it comes to questions sent by journalists. In this context, one should acknowledge and highlight the valuable and effective feedback and collaboration provided by the Higher Education Bureau (which has meanwhile been integrated into the Education and Youth Development Bureau).

UM Rector: “We aim to be among the world’s top 200 universities in five to ten years”

The Rector of the University of Macau (UM), Yonghua Song, is keen on taking the institution to new heights. As UM celebrates its 40th anniversary, the goal is to climb into the ranks of the world’s best 200 universities this decade through an improved focus on research, teaching and internationalization.

University of Macau (UM) Vice Rector for Research Wei Ge aims to boost the impact of the research and development carried out by the university and foster academia-industry collaboration. The “One Country, Two Systems” principle is the key advantage.

Before and after March 1981

In terms of campus size and comprehensiveness of the programmes offered the University of Macau clearly stands out. But the Macau University of Science and Technology (MUST) is home to more students than UM.

The Government is keen on turning higher education into an industry that can contribute to the diversification of the local economy.

Although the number of students who finish secondary school is decreasing, the government wants to significantly increase students enrolled in higher education by 2025. Or precisely because of that.

UM and MUST are on a league of their own compared with other local universities when it comes to international rankings. The two institutions have climbed up the rankings thanks to a stronger focus on research output. But some question whether it comes at the expense of teaching.

The Government and university representatives guarantee that academic freedom is sound in Macau, while some critics cast a more sceptical eye on it.

It is a two-way street. Student mobility across the border is increasing alongside the prospects for collaboration between higher education institutions, namely in the Guangdong-Hong Kong-Macau Greater Bay Area.

Is Hong Kong no longer a model?

Universities in Hong Kong maintain their trademark as reference in East Asia, but the neighbouring city’s model is not without its flaws.

Macau-born Iu Vai Pan was Rector of the University of Macau for 9 years (1999-2008) and currently serves as College Master of Stanley Ho East Asia College (SHEAC) at UM, where he continues to teach at the Faculty of Science and Technology. Professor Iu first joined UM (then as University of East Asia) in 1988, making him the most veteran university lecturer still in office.