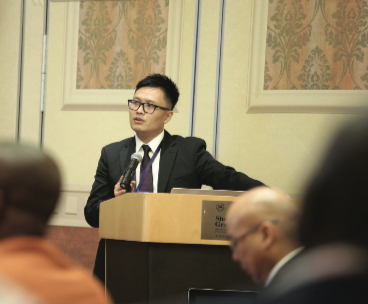 Ku Weng Keong tells Macau Business “Building an efficient rapid transit has been identified as one of the most effective solutions for Macau.” However, the development and operation of the LRT in Macau “has been anything but smooth.”

Ku Weng Keong is Chairman of the Council of the Chartered Institute of Logistics and Transport in Macau, a professional organization formed by people in the field of supply chains, logistics and transport. He is also a young Macau-based researcher and a voice of public intervention in the field of transport.

In Macau, almost everyone complains about the traffic, especially on the Peninsula, but that doesn’t make the LRT is a project loved by the population. What do you make of that?

Ku Weng Keong– Urban traffic congestion is the most critical problem encountered in the development of a high-density city such as Macau. Like major international cities such as Hong Kong, Taipei, and Singapore, where the rail transits carry passengers to and from their destinations quickly and efficiently every day, building an efficient rapid transit has been identified as one of the most effective solutions for Macau. However, the development and operation of the LRT in Macau has been anything but smooth. Therefore, to achieve the goal stated above, the government needs to do more to tackle any problems affecting public confidence and the reliability of LRT system operations. If this can be accomplished, the Taipa Line can not only operate to serve the public, it can also demonstrate to the public the LRT’s functions and benefit to Macau. The extension of the Taipa Line to Barra in two years should be a golden opportunity for the government to regain public confidence and smooth out any current problems affecting the LRT’s reliability and effectiveness.

Everything mentioned above is in addition to what the government should be doing to conduct a comprehensive study on determining the root causes of Macau’s traffic problems and finding alternative solutions, and letting the public understand the pros and cons of different scenarios to get social consensus on how to solve the traffic problems in Macau.

For example, one of the leading causes of traffic problems in the Peninsula is its compact and high-density living spaces and the lack of spaces for other social activities. Therefore, the residential and employment areas should be gradually shifted to places like the new reclamation areas, to reduce the population density in the Peninsula and to make room for other activities. Moreover, by constructing transport infrastructure in the new urban areas – especially if that can be done in tune with residential housing – costs, efforts, and possible resistance will be much less than what would occur in established areas. Experiences with attempted developments of the LRT on the Peninsula have shown that the “not in my backyard” mentality plays deep in people’s minds.

In your opinion, is the system currently planned for the Peninsula sufficient or will it sooner or later have to make the connection around the city?

K.W.K.– The “phase one” development of the LRT system was originally connecting the Border Gate, via the southern coast of Macau, with the Taipa Line. Based on information available on the Internet, there are also a few LRT lines planned together to form an LRT network covering almost all urban areas in Macau. Unfortunately, due to controversy over the LRT routes through the Macau Peninsula and the yet-to-be confirmed final route, the development plan has been greatly affected. It seems that at least in the medium term, the East Line will be opened first, and that will connect the Border Gate, via Zone A, with the Taipa Line, and interchange with the Hengqin and Seac Pai Van Lines. It is believed that this recent change in planning is a result of considering both societal and travel demands, which should be compatible with the urban development of Macau in the next decade or so. In addition, based on information from MLM, the LRT is a fully automated, driverless train system with the option of two-unit or four-unit trains.

Is the Taipa Line, seen in isolation, a mistake, or, when the flow of tourists returns to normal, will it prove its usefulness?

K.W.K.–  The Taipa Line was never planned as a stand-alone line to begin with, however there has been a long delay confirming the Macau Peninsula route, such that the Taipa Line has needed to operate on its own for the time being, which does present a big blow to the intended benefits the LRT aimed at achieving in its plan. According to data released by the LRT Corporation (MLM), the average number of passengers per day has been around 2,000 since 2021, which is much less than the capacity the LRT system can offer. To a large extent, this has been due to the pandemic of COVID-19, which affected the arrival of passengers and residents’ activities. The LRT has not operated at normal levels since it began paid service in February 2020, which unfortunately coincided with the onset of COVID. Therefore, it is still too soon to judge the effectiveness of the Taipa Line at this moment. Based on the limited information about patronage, as reported by MLM, the ridership seems to be positively related to tourist numbers. Therefore, to strengthen its effectiveness, the parties involved in LRT operations should come up with plans to improve their services and promotions to raise ridership and revenues. For example, schemes to enhance the use of LRT services by tourists while they’re visiting Macau should be promoted. The recent promotion for tourists arriving via Air Macau to freely exchange completed air tickets for three-day LRT passes seems to be attracting a lot of interest. This should be rolled out to all tourists, allowing them to purchase the three-day pass tickets. Although attempts to set up commercial activities at stations have proven to be less than well received, due to low ridership, other forms of commercialization should be examined, for example, advertisements on train exteriors may be viable given the fact that LRT tracks pass by major tourism locations and residential areas in Taipa and Cotai. This just to say that the parties involved in operations, by tapping into experiences in transit operations elsewhere or nearby, may still have room to explore how to increase revenues by whatever amount to improve the sustainability of its services.

Do the foreseen interconnections with Hengqin seem to you to be sufficient, or is this an issue that will suffer from developments stemming from increasing integration with Hengqin?

K.W.K.–  With the announcement of the “Master Plan for the Development of the Guangdong–Macau Intensive Cooperation Zone (GMICZ) in Hengqin”, residents will be encouraged to view living and working in Hengqin as one of their potential options. Therefore, speeding up the construction of the transport links connecting Macau with the new urban areas is one of the ways to facilitate such developments and lighten the traffic burdens on the Peninsula. Meanwhile, while developing the LRT network as the core transport policy and strategy into the future, the government should also develop other strategies, as part of a comprehensive approach, to address common traffic problems in Macau, such as overlapping bus routes and lack of parking spaces in older urban areas.

With the further cooperation between Guangdong and Macau, it is believed that the number of people who travel via Hengqin will gradually increase. As mentioned before, the LRT system can increase its capacity flexibly by increasing train units and shortening headways. We believe that infrastructure, such as stations, should be designed in a way that considers the number of passengers that need to be dealt with, and if necessary leaves space and design potential for future expansion when needed. It’s important to note that the transport services and passengers’ experiences of connecting Hengqin and Macau will definitely be essential in defining the impression of Macau as a tourism city, and a flourishing metropolitan area with a diversified economy. However, with the recent announcement of the GMCIZ, it does raise some alarms at this moment, as to whether the GMCIZ and the high-speed rail stations earmarked in its master plan, which are only announced recently, have been already considered, since the Hengqin line is currently under construction.

Apart from the LRT line, it appears that plans for several road links connecting Taipa and Hengqin were presented to the public in the past. They now seem to be crucial to ensuring that connectivity between Macau and Hengqin can be seamless. Considering the scale of the GMCIZ and the activities envisaged in the master plan, it does seem that associated plans should give proper consideration in the subsequent stage of planning and development.